By Zhanna Shayakhmetova in Kazakhstan Region Profiles: A Deep Dive Into the Heart of Central Asia, Tourism on 13 August 2020

NUR-SULTAN – Scientists have found a khanaka, an ancient Sufi shrine, at the Kultobe settlement in Turkestan, during archaeological excavations, the press service of the Kazakh Research Institute of Culture reported on Aug. 6. 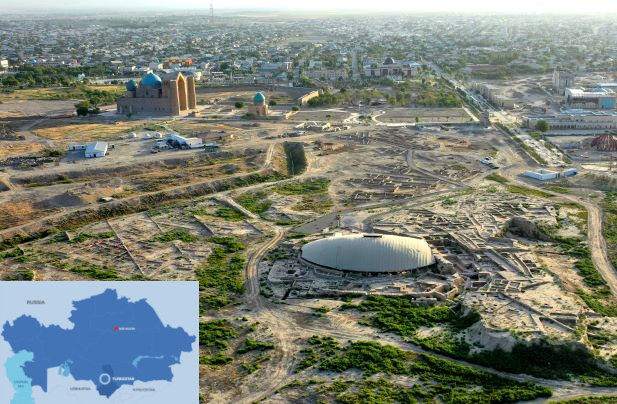 A khanaka is associated with the Sufi’s dervish orders, which were widespread in the Middle Ages. The terms khanaka and ribat were used in the East, tekiya or tekke in Asian Turkey and zaviya in the Maghreb (Northwest Africa).

A khanaka is a building designed for spiritual retreats or gatherings in the Sufi community used throughout the 15th to 19th centuries.

The experts have found not only fragments of all the premises and ritual halls of the building, but a crypt with the burials of the dervish order’s members.

Such constructions, along with mosques and religious schools were often built by the supreme rulers or their governors.

“This khanaka is one of the most interesting constructions of antiquity related to the Yasawi order. First, it is located 300 meters near the mausoleum of Khoja Ahmed Yasawi. Second, the buried are lying with their heads to the north, towards the mausoleum. The main difference between Sufism and orthodox Islam is the cult of holy graves. Due to this, there are a number of Central Asian and Eastern khanakas, where the founder of the community or a member of the Sufi order are buried,” said Andrei Khazbulatov, research advisor, Associate Professor and Honored Worker of Kazakhstan.

The building is unique not only because of its architectural concept, but because it will also help to reveal many aspects of the life and works of the Yasawi order’s representatives.

These monuments have not been studied extensively. Previously, the archeologists discovered two Kazakh khanakas in the South Kazakhstan settlements of Otrar and Kayalyk.

The ancient Kultobe settlement is one of the oldest cultural, religious and commercial centers along the Great Silk Road. All the archeological studies conducted at the fortified settlement and the archaeological site can be observed on the Kultobe.com website.