By Zhanna Shayakhmetova in Kazakhstan Region Profiles: A Deep Dive Into the Heart of Central Asia, Tourism on 10 August 2020

NUR-SULTAN – The East Kazakhstan region boasts to have 13 unique places included in the map of Kazakhstan’s sacred places. Sacred places are cultural heritage monuments, mausoleums and natural landscapes identified by the Modernization of Kazakhstan’s Identity initiative. 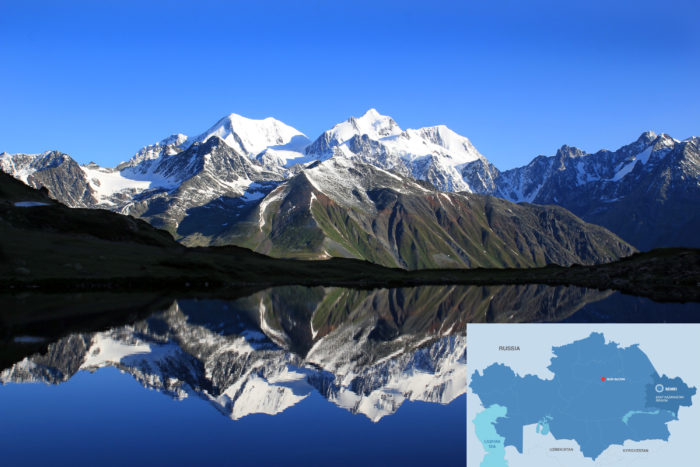 The Muztau Mountain (Belukha) in the East Kazakhstan region. Click on the image to see the picture.

Most of these sites are located in the city of Semei and the Abai region, according to the regional press service.

The Zhidebai-Borili historical and cultural memorial is one of the main sacred places in the Abai region. Abai’s father Kunanbai had an estate in the Zhidebai village. Abai inherited the family estate in 1884, and spent the last eleven years of his life there. He wrote most of his works in his native Zhidebai village.

The memorial includes the Abai museum, the Mukhtar Auezov museum in the Borili village, the Abai House-Museum in the Zhidebai village and 16 historical sites situated on more than 6,000 hectares.

The Konyr-Aulie cave is also a sacred attraction in the Abai region. There’s a stone bowl filled with ice water. According to the legend, people used to come here for help and salvation from diseases. The water healed people from wounds. Abai and Mukhtar Auezov also visited this place. Now people from all regions come to swim in the cave. Semei is a home for the museum dedicated to the outstanding people of the Alash Orda People’s Party (The 20th century Kazakh intellectuals’ party). It is located in the house of Abai’s student Aniyar Moldabayev. It is still unknown when the house was built. Abai helped Moldabayev to purchase this wooden two-story house. At the beginning of the last century, Mukhtar Auezov also lived there, as well as the leaders of the Alash movement. The visitors can learn more about the life and work of Auezov, his social activities and about the representatives of the Alash party.

The museum dedicated to the outstanding people of the Alash Orda People’s Party.

The Stronger than Death monument is included in the list of sacred places in Semei. Opened in 2001, the monument was installed to commemorate the victims of the Semipalatinsk nuclear test site.

There’s also the Fyodor Dostoevsky literary-memorial museum. It is the house where the Russian writer lived from 1854 to 1859 when he was in exile in Semei.

The Stronger than Death monument in Semei.

The Muztau Mountain (Belukha) is a popular destination for climbers and extreme tourists in the East Kazakhstan region. There are tourist centers and facilities, cottages and guest houses.

“Mount Muztau is located in the center of Eurasia, on the border of Kazakhstan and Russia. Each nation has its own name – the Altai people call it Uch-Sumer, the Russians call it Belukha, and the Kazakhs call it Muztau. This mountain has a special energy that attracts scientists, poets, artists, writers and tourists. There’s a great variety of activities,” said the spokesperson of the Semei city administration.

People can also learn about the cultural heritage, nature and history of the Altai region.

The Shilikta Valley is an 80 kilometer-long plain surrounded by the Tarbagatai, Manrak and Saur-Saykhan mountains. More than 200 monuments of the early Saka period and the Shilikta gold jewelry hoard are located there.

A burial vault built of larch logs was discovered as a result of excavations in 2003. In addition, 4,333 gold items were found.

Excavations continued and, later, a looted larch tomb was found in the mound. More than 2,000 leaf gold ornaments were found including plaques in the form of a deer, a golden eagle-griffin, a cat-like predator, stripes on clothes of a geometric shape. The items are dated back to the 7th-6th centuries BC.