By Zhanna Shayakhmetova in Society on 7 July 2020

NUR-SULTAN – Kazakh President Kassym-Jomart Tokayev congratulated Kazakhstan with National Dombra Day, which is celebrated on the first Sunday of July, according to the Akorda press service. 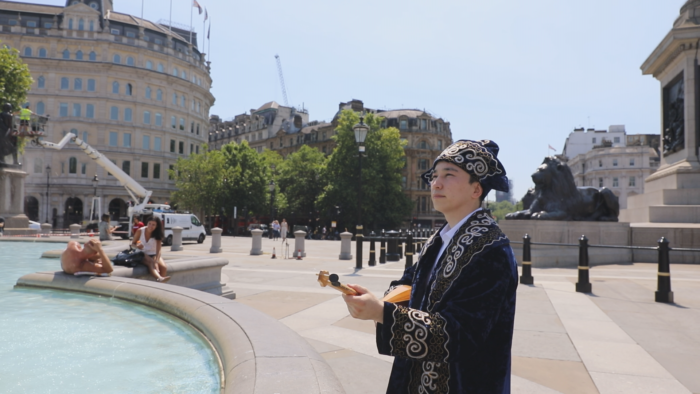 Student from Kazakhstan Aidar Aishabekov performed Kazakh composer Kurmangazy’s famous kyuis in the center of London to mark the Dombra Day on July 4, 2020.

The Dombra is a musical two-stringed instrument, which occupies a special place in Kazakhs’ hearts.

President Tokayev noted that this day represents the nation’s course towards spiritual modernization and putting value on Kazakh traditions. The music of the Kazakh folk instrument dombra tells the history of its people and the centuries-old chronicle of the great steppe.

“The nobility and generosity of Kazakh people are represented in music and kyuis (musical compositions). The culture and art of our people do not exist without dombra. Kyuis have always elevated the national spirit,” said Tokayev.

This year, people celebrated Dombra Day from home due to the coronavirus pandemic. “This day gives us a deep appreciation of our national arts. The sacred instrument brings us its melody through symphony and opera, becoming an integral part of classical art,” Minister of Culture and Sports Aktoty Raimkulova wrote on her Instagram.

The Kyui-Live online contest was held by the Department of Culture, Archives and Documentation in the Akmola Region. More than 30 performers of different ages and professions took part in the competition and posted their videos on social media. All the winners received prizes and diplomas.

The Kazakh people also celebrated Dombra Day in other countries. QazAlliance, the Alliance dedicated to supporting Kazakh people living abroad, launched the World Dombra Festival project, reported the alliance on its Facebook.  Dombra players from 25 countries and 36 cities took part in the project and congratulated Kazakhstan on Dombra Day.

The project’s objective is to promote Kazakhstan and Kazakh culture abroad and to introduce our national arts to children, according to the organizers.

The “Dimash Baizhuma” musical composition dedicated to Dimash Kudaibergen was presented by Zhanaidar Nursaliev, a project participant from the Altai Republic in Russia.

Student of University College in London Aidar Aishabekov performed Kazakh composer Kurmangazy’s famous kyuis “Adai” and “Balbyrauyn” on Trafalgar Square in London on the eve of the Dombra Day. The Embassy of Kazakhstan in the United Kingdom supported his performance.

Aishabekov said that the dombra symbolizes the cultural heritage of Kazakh people and it is necessary to promote it worldwide. Being a lawyer by occupation, he masterfully performs complex compositions as well.