By Zhanna Shayakhmetova in Tourism on 18 July 2020

NUR-SULTAN – The 23-year musician Marzhan Kapsamat surprised her followers with her recent music video on the pink-coloured Lake Kobeytuz. A well-known Kazakhstan social media sensation, this lake attracts those who take inspiring selfies and travel images. But Kapsamat’s solo performance of the famous Kazakh composer Dauletkerey Shigaiuly’s kyui (musical composition) “Korugly” became one of its kind. 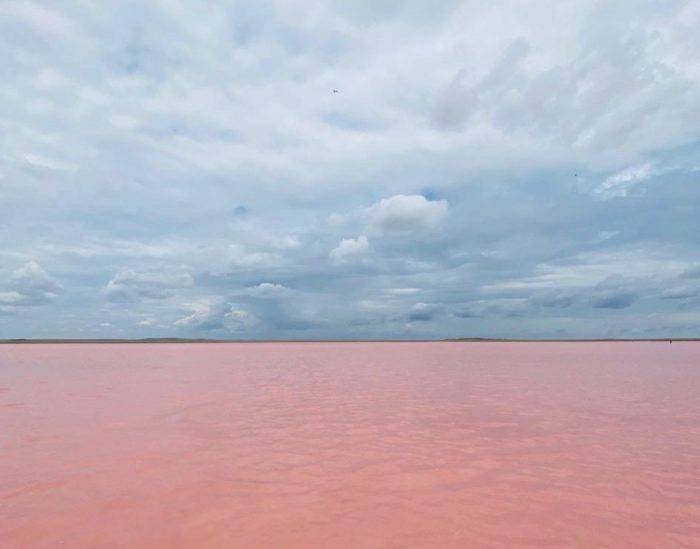 A saline lake in the Ereymentau region is located about 160 kilometers from the capital. The lake is popular for its healing mud and change in color every several years. According to scientists, the culprit, a dunaliella salina is a type of halophile green micro-algae usually found in sea salt fields. Due to the ability to create large amounts of carotenoids, it creates a reddish hue. People use D. Salina in cosmetics and dietary supplements for its antioxidant activity and taking baths in the waters also has beneficial effects.

“I learned about Lake Kobeytuz this year. As soon as I saw a photo of the lake, I imagined myself sitting and playing there,” said Kapsamat, who is currently teaching music.

Kapsamat said that she wants more people to know about the Kazakh national instrument dombra – a pear-shaped, long-necked, two-stringed, plucked musical instrument, and the country as a whole. “I knew that the performance on the pink lake would attract the attention of not only locals but also foreign people,” she said.

As soon as she uploaded the video on her Instagram account, users from other countries started to like and comment on the video. They also asked her about the lake and the instrument. Her national attire was also of great interest.

“When I saw a picture of me playing on the lake, I definitely knew that I should play Dauletkerey’s kyui. “Korugly” is translated from Turkic as “Son of the blind.” It is also translated as “Son born from the grave.” According to the legend, his mother was buried pregnant, but the child was born and survived, so he was called a son born from the grave. Almost all Turkic peoples know this composition. My friends from neighboring countries were very pleased to listen to this kyui,” she added.