By Zhanna Shayakhmetova in Society on 9 July 2020 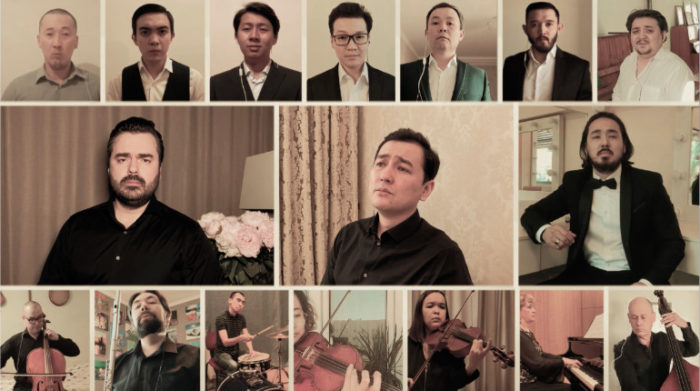 Astana Opera soloists performed in the the Zhuravli (Crane birds) an international online project launched on Victory Day on May 9.

A number of scheduled major premieres were not able to be staged due to the pandemic outbreak. Gaetano Donizetti’s operas “Don Pasquale,” “L’Elisir d’Amore,” and “The Call of the Steppe” ballet set to Tles Kazhgaliyev’s music have been postponed and will be presented in the new season. The theater plans to start the new season no later than the end of September if the epidemiological situation improves in the country.

In the meantime, the theater migrated to the internet to support its audience during the lockdown from March onwards. All together, 41 performances were also broadcast on TENGRI TV.

“The soloists participated in the Quarantine Star project, organized by the Ministry of Culture and Sports. The opera house also offered viewers 15 online performances. These included the Zhuravli (Crane birds) an international online project launched on Victory Day, two episodes of the“Everything You Need to Know about Ballet” program featuring Serik Nakyspekov, who spoke about ballet terms and the special characteristics of modern dance. And on May 7th, Kazakh musicians took part in the Tchaikovsky’s concert to mark the composer’s 180th anniversary,” according to the official release.

All the tours were held as part of the Modernization of Kazakhstan’s Identity state program.

In 2020, the Vakhtangov State Academic Theater presented scenes from Alexander Pushkin’s novel in verse “Eugene Onegin” and Anton Chekhov’s “Uncle Vanya” in January for the first time in the Kazakh capital.