By Aidana Yergaliyeva in Society on 4 June 2020

During and shortly after the lockdown, Kazakh graffiti artists created murals expressing feelings of gratitude to pandemic frontline workers in Nur-Sultan and Almaty. The murals have been widely discussed on Kazakh social media. 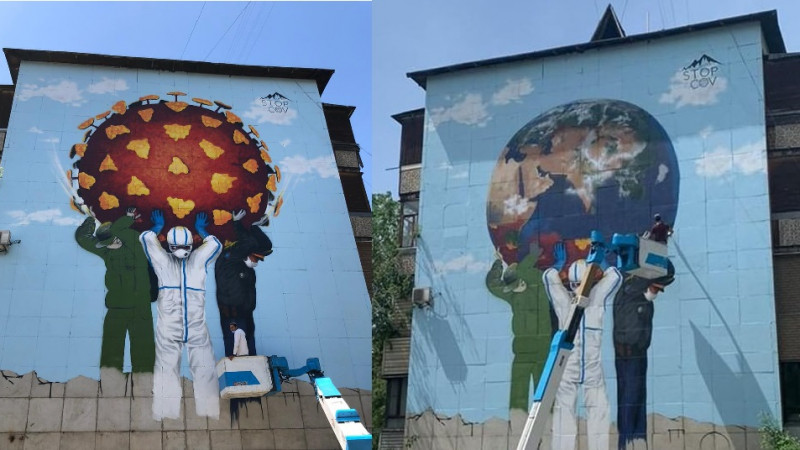 Mural expressing gratitude to front line workers on Al Farabi Avenue in Almaty. The artists had to repaint it after public criticism. Photo credit: tengrinews.kz.

Over the last few years, Urban Art Fest, a city akimat (administration) initiated a project that popularised murals as an art form. It organized contests for vibrant and bright murals that promoted national identity to decorate old Soviet era communal buildings. The city residents were sometimes even given the opportunity to vote and choose the designs they preferred the most.

During the lockdown, local artists volunteered to leave a sign of public gratitude towards the frontline workers during these uncertain times. The city akimats eagerly supported the initiatives, and helped with the procurement of equipment. 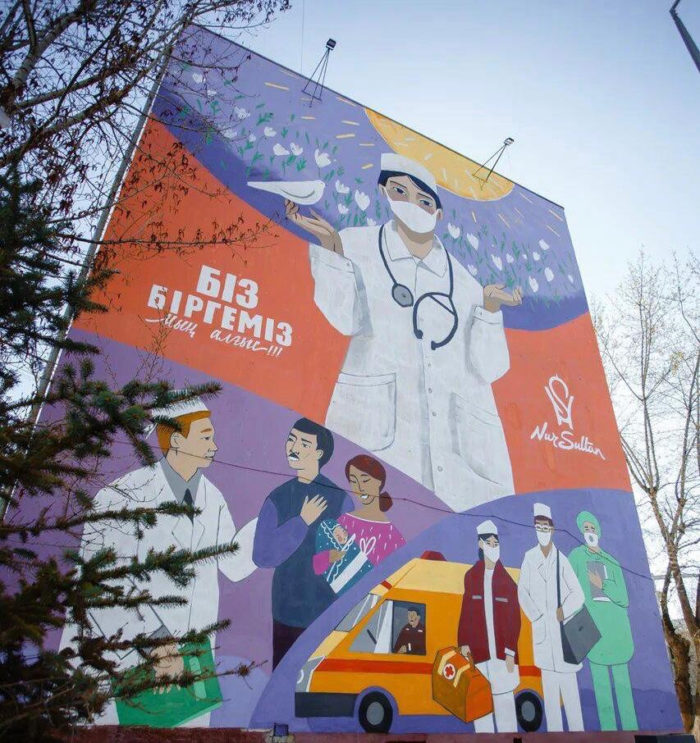 The much-discussed murals radiate kindness. One such mural in Nur-Sultan on Zhangeldin Street, for example, depicts doctors and nurses in their traditional white lab coats and masks under a blue sky, which apparently represents that they are bringing peace to the world. “Healthcare providers are our heroes and the country’s leadership provides support to doctors. We cannot describe in words how much we value their work and how proud we are of them,” Ali Zakir and Yerzhan Tanayev, the artists who painted the building, said to Nur-Sultan Akimat press service.

Aigerim Karibayeva created the design of this mural. She is well known in Kazakhstan as Art Aika for her beautiful merchandised soft pastel sketches of Kazakh girls and women in clothes with romanticized Kazakh traditional patterns, sometimes mixed with aspects of modern lifestyle.

But the mural spurred a discussion in society showing that people are not indifferent to its message. Some criticized it for being childish and similar to official Soviet style propaganda posters, others for not being able to fully do justice to the tremendous work that the healthcare professionals had done. Others, however, adored the bright and cheerful colors that added a much needed uplifting message during the difficult period of forced isolation.

Later a mural with the same intention appeared on May 13 on Al Farabi Avenue in Almaty. The artists had to modify the design halfway through because of criticism from the apartment owners in the building.

Initially, the artists began by drawing a doctor, a police officer and a soldier holding a spheric portrayal of a coronavirus infectious agent on their shoulders. The local residents thought that it seemed to promote a twisted message – that the frontline workers were promoting the virus instead of fighting it. The artists finished the mural by converting the corona ball into a globe.

“I looked at what was happening in the world, about how hard it was for doctors and it caused me to feel feelings of respect and sympathy – I could not remain indifferent. When I was ill, the doctors treated me compassionately. It struck me and I was inspired to come up with some kind of mural in gratitude to the doctors,” artist Tamara Elfimova said to sputniknews.kz.

The cities had many murals put up expressing gratitude to medical workers, as well as to the memory of Kazakh-Soviet military officer and people’s hero Baurzhan Momyshuly, as well as the most recent mural with the motto, “Oz yelingdi buzba! (Don’t ruin your homeland!)” that promotes integrity and honesty as part of a government promoted anti-corruption campaign.