Kazakhstan celebrated June 1 as International Children’s Day with a range of festivities and online activities. 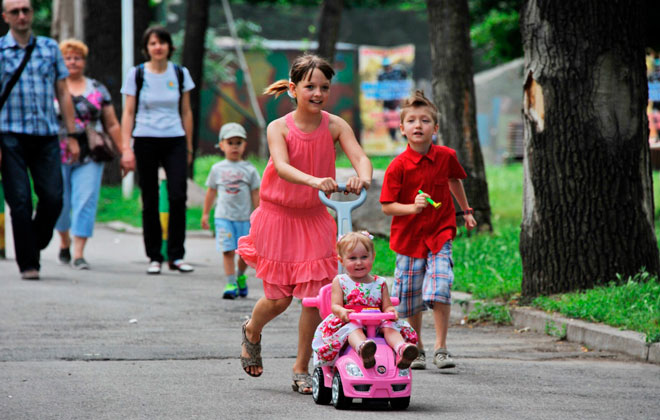 “This occasion reminds us of all adults’ responsibility for the well-being, health, and safety of the growing generation. Every child in our country deserves love, joy, and happy childhood!” wrote Tokayev on his Twitter account.

The holiday was adopted by the Women’s International Democratic Federation (WIDF) at a special session held in November 1949 with the first International Children’s Day held in 1950.

In Nur-Sultan this year, instead of the many festivities and campaigns usually held to celebrate the day, the city’s Akimat (city administration) organized 65 virtual competitions and campaigns.

Among them is the nationwide “Everything is For Children”  drawing contest organized by the city’s children’s art school. Children aged 10 to 16 years old are invited to submit their drawings on different topics such as “My Childhood,” “My Family,” “Happiness is Born in the Family,” “My Path to the Future,” among others. The online exhibition scheduled for June 25 will display the winners. 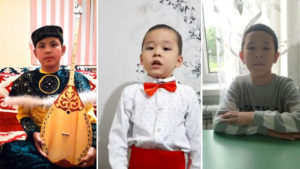 More than 30 kids in Almaty also took part in the competition to read the poems of Abai Kunanbayev, a well-known Kazakh writer, poet, and founder of the written Kazakh literature. The youngest participant was three years old. This year, Kazakhstan celebrates the 175th anniversary of Abai’s birth, an important milestone for Kazakhstan celebrated at a national level. The contest was organized by the Kazakh Military Engineering Institute of Radio Electronics and Communications.

On June 1st, parents and their children had a chance to consult with child psychologists and representatives of the internal affairs department, the education system, and NGOs during the Instagram live stream.

The center for supporting underprivileged children and the SOS Children’s Village organized a festive program, which included creative contests, a floristry art exhibition, and a costume runway. All these events are held online and visible with the #NS_balalarkuni_bilim hashtag in social media.

In Almaty, ITeachMe professional development center partnered with the Eurasia Foundation of Central Asia and Chevron to support 30 families raising kids with disabilities. 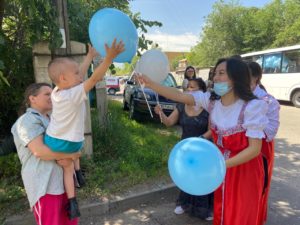 You are Not Alone campaign is also meant to provide moral support to parents. Photo credit: ITeachMe centre

“When was the last time a fairy-tale character came to your house? Probably during the last new year and it is up to us to change this tradition. That is why we have prepared a special team with bright and magical characters from fairy tales, gifts, balloons to create a positive mood. We visited 30 families raising children with disabilities and shared our positive energy. Our idea is that every child should believe in miracles,” said Zahira Begaliyeva, director of the ITeachMe center.

“We bought gifts, sweets, toys, and creative boxes and organized a mobile group, which included juvenile police officers and district inspectors, and then we went to visit these families. We did not do anything supernatural. Kindness and mercy, in my opinion, is the basis of human relations especially when communicating with children,” said Darkhan Musanov, head of Almaty’s Zhetysu District police department, noting this was not just a one-time campaign.

Supporting children, particularly those in more vulnerable groups, has been a priority for the government in Kazakhstan. According to national statistics, there are nearly six million children aged 0 to 17 years old in 2019, as the population has also been steadily growing in Kazakhstan, from 15,074,767 in 2004 to 18,631,779 in 2019.

Since January, Kazakhstan has spent approximately 36 billion tenge (US$85.5 million) on social allowances to 382,000 large families, between 42,500 tenge (US$101) to 74,400 tenge (US$177), paid regardless of the family’s income of any other underlying condition, as part of a new approach in targeted social assistance.

Children from low-income families are also entitled to a guaranteed social package. Kids aged one to six years old are provided with food packages and hygiene products, while children aged 6-18 years receive meals at school, school materials, and clothing and get their transportation costs covered by the school.

Kazakhstan also plans to launch additional support centers for low-income and large families to carry them through until August. There are currently seven such centers in operation across Kazakhstan that organize recreational events as well as vocational training.

“Annually, 400,000 kids are born in the country. To support motherhood and childhood, there is a one-time benefit given upon the birth of the first child, then a monthly social allowance for childcare upon the child reaching one year of age. More than 271 billion tenge (US$644 million) was allocated for this purpose this year,” said Vice Minister of Labour and Social Protection Yerlan Aukenov.