In an interview with Kazakhstan’s InBusiness website, ABA (Advanced Bank of Asia) Bank Executive Director Madi Akmambet and CEO Askhat Azhikhanov shared their success story of turning a one-branch bank in Cambodia into a progressive and fast-growing commercial bank with more than 75 branches, 200 self-banking machines, 350 ATMs and 6,500 workers, who are almost entirely Cambodian, all in less than a decade. 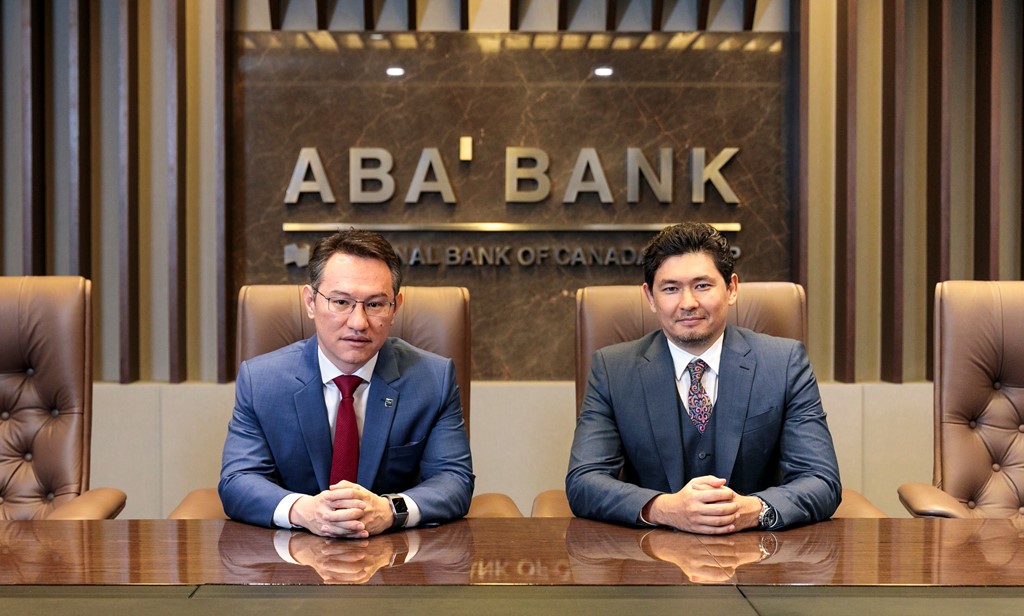 ABA Bank is currently among Cambodia’s top three commercial banks with nearly $218.9 billion in assets. In 2019, the bank had 40 million transactions amounting to $34 billion and the same year it generated a record-high revenue of $127 million, a 72 percent growth over 2018.

Kazakh natives Akmambet and Azhikhanov, graduates of Kazakh State Academy of Management and London’s Cass Business school, arrived in Cambodia to develop ABA Bank in 2009 under the guidance of  Damir Karasayev, Kazakh businessman and former head of Kazakhstan Stock Exchange (KASE), former CEO of then Kazakhstan’s large mobile operator KarTel and former CEO of KazTransGas, who in 2007 acquired a 100 percent stake in the bank.

“I came at the beginning of 2009 and over this period, Damir created a team and fully updated the IT system, before starting to create branches. As for me, I had the task of growing the bank and turning losses into profits. I conceived of the bank as a child that could be raised and fed with assets worth just $40 million and with 100 workers to start. It was not easy at first, as there were no business team, no client base, no knowledge about the country,” Akmambet said, as quoted by inbusiness.kz.

He noted the significant competition present in the market, where other banks had $500 million to $900 million in assets with an already developed branch network.

Both Akmambet and Azhikhanov had vast experience working in both the financial sector in Kazakhstan and beyond, including at the Kazakh Finance Ministry and National Bank.

“This diverse experience gave us a clear idea of what we might need to do in an untapped market like Cambodia. We knew that it was doable,” said Azhikhanov.

“We were not the only ones who saw the market potential. Many competitors were coming here and over the years the number of banks doubled from 30 to 60, and more than half of them began operating as subsidiaries of large foreign banks. Therefore, we had to think about how to be competitive, fast, and flexible. The full support of Damir Karasayev was a key factor in our success and gave us a strong competitive advantage because foreign banks were slow in their decision-making due to the need to run everything by the bureaucracy in their headquarters,” said Akmambet.

The bank strategy focused on small and medium-sized businesses that make up 90 percent of operating companies in Cambodia and incorporating new technologies, including mobile banking and fintech, which enabled the bank to have 90 percent of its transactions done without the need to visit the office. Among other technologies used by the team were e-cash processers, which enabled cardless ATM withdrawals, the ABA Pay service that uses QR codes and cashless payments, and PayWay, an e-commerce payment online service.

Profit was not the first priority, said Akmambet, profits were the “outcome of a well-cultivated relationship between the company and its clients.”

“From the very beginning, we wanted to run our banking operation honestly and fairly, and the main way to do that is to treat customers humanely and not to make profits from ruining people, but to offer products that would help develop the country’s economy. Therefore, we did not focus on mortgages, retail consumer loans, collateral, and unsecured loans at high interest rates (loan sharking) and other activities that drive people into crushing debt. We know that because of the lack of financial literacy, people will take loans without thinking about how they will pay them back,” said Azhikhanov, stressing that helping the economy and businesses grow constitutes the bank’s philosophy.

The bank’s average loan amount amounts to $50,000 at an interest rate of 10 percent, while the share of non-performing loans in the loan portfolio is only 0.7 percent.

Investors were eyeing ABA bank, but among them, only the National Bank of Canada, the sixth-largest bank in Canada and the leading bank in Quebec with nearly $207 billion in assets, shared the bank’s ethics and interest in promoting the country’s economic and social development. In 2014, they started to steadily acquire stakes in the bank starting from an initial ten percent stake, but then eventually bringing their share up to 100 percent in 2019 and investing a total of $320 million.

“They did not buy 100 percent upfront, but instead studied our practices and whether our financial reports were sound. Therefore, by the time they were ready to purchase the controlling stake, they had a deep trust and respect towards the team. They did not replace anyone. It is a very rare occurrence for such a large financial institution to purchase a bank, and then to not change out the team. This shows that they valued the highly qualified specialists already working for the bank despite their country of origin,” said Azhikhanov.

The team said they did not expect they would stay in Cambodia for ten years.

“From the very beginning, we looked at the bank, not as a temporary project and we did not harbor plans to rip off the local population. We tried to be responsible to the country and to its people. And this is perhaps the key to our success, we have improved our management style and built a good image, which has strengthened the company’s resistance to market stress,” said Akmambet.

Such an approach compounded with the bank’s high liquidity and quality loan portfolio helped it weather some of the worst fallout from the Coronavirus pandemic.