“Kieli Bi” (Sacred Dance in Kazakh) is a dance film produced by Dana Mussa and Alexander Murphy, which has made it into the official selection of the 48th annual Dance on Camera Festival in New York. The festival will take place online on July 17-20, while Mussa’s film is scheduled to be screened on July 19.

Founded in 1971, Dance on Camera is one of the oldest dance film festivals in the world that gatherers filmmakers to “provide a platform for choreographic storytelling, creative expression and intimate access to innovative media artists and their cinematic works.”

“Kieli Bi” was filmed in 2019 in Mangistau in western Kazakhstan, known for its breathtaking scenery and Martian-like landscapes – an increasingly popular tourist destination. 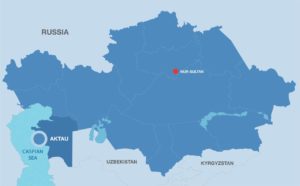 Click on the image to view in full size.

First screened in Aktau, the film is meant to remind people of the close links between humans and nature, the importance and power of the matriarchy as well as the freedom of body and spirit encapsulated by the lifestyle of the nomadic peoples.

Mussa said that all her projects are centered around a connection to nature.

“The film is about a free woman, in touch with her body, who isn’t afraid to express herself through her body. I have split the film into seven archetypes, and in each of them, I narrate, show and dance. It is very important to me. Every inch of a woman’s body is sacred, therefore the film is called ‘Sacred Dance’,” said Mussa, reported 24.kz.

The film displays Mussa herself and her spiritual voyage in time and space returning to her home country of Kazakhstan.

Participating in the festival has been a dream for Mussa, founder of Chance to Dance school in Paris and Ethno Ballet Association. Born in Kazakhstan, she has been living in Paris for the past ten years working on her own innovative dance concept – ethno ballet. It represents the combination of classic ballet techniques with aspects of nomadic tribes and their ritual dances and is based on seven powerful feminine archetypes – hunter, rider, amazon, shaman, priestess, queen, and goddess.

You can watch the teaser for the film below.