By Zhanna Shayakhmetova in International on 14 May 2020

The member states of the Shanghai Cooperation Organization (SCO) will adopt an action plan to ensure sanitary and epidemiological well-being and biosafety at the SCO summit in St. Petersburg in July. This was announced on May 13 at the virtual meeting of the Council of Ministers of Foreign Affairs of the SCO Member States chaired by Russian Minister of Foreign Affairs Sergey Lavrov. 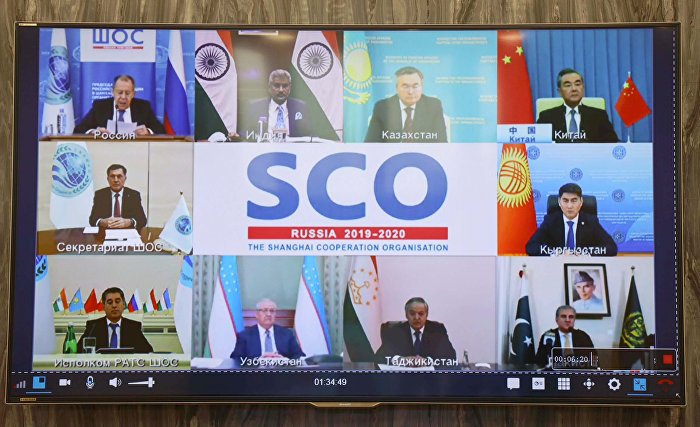 The action plan will coordinate efforts to strengthen laboratory capacity and advanced training of specialists, to conduct joint research and to develop vaccines.

“The ministers emphasize the importance of the G20 emergency summit aimed at protecting people’s lives, restoring global economic stability and growth. It is necessary to develop approaches based on the UN General Assembly resolutions adopted by consensus on global solidarity and international cooperation in the fight against COVID-19 within the UN to address these challenges in accordance with international law, including the creation of free, fair, non-discriminatory, transparent and stable conditions for trade and investment. Economic consequences caused by the pandemic require special attention,” reads the statement.

SCO Secretary General Vladimir Norov noted that solidarity and mutual support between member states in the fight against the coronavirus epidemic would continue going forward. It is important to maximize the efficiency of the rapid response effort within the organization to new outbreaks and to establish cooperation between the SCO and relevant international institutions, including the World Healthcare Organization.

“The member states showed a high level of solidarity in the fight against the epidemic of coronavirus in accordance with the Shanghai Spirit principle. The states promptly received information about the threat and took appropriate preventive measures taking into account China’s experience,” said Norov.

The SCO Secretariat developed the draft Regulation on the Coordination Council for the joint response to the epidemic threats, which is designed to develop and implement comprehensive measures for the prevention, early warning and reduction of the negative impact of epidemics.

A looming food crisis was named as one of the expected consequences of the pandemic. In this light, the Secretary General called for strengthening cooperation in ensuring food security and proposed to develop a Concept of Cooperation and an SCO Action Plan for Food Security. The Secretariat is ready to submit draft related documents.

The widespread use of digital technologies in public administration and business should bring in leading IT companies of the SCO countries – such as the Alibaba Group and Mail.ru Group. The measures against cybersecurity challenges and hacker attacks on state and financial institutions should be provided in the plan for the implementation of the SCO Cooperation Concept in the field of digitalization.

Norov said that the member states should continue to provide assistance and work towards a peaceful settlement of the situation in Afghanistan despite the challenges presented by the pandemic. The organization will take an active role in resolving the Afghan problem as part of the SCO-Afghanistan Contact Group mechanism.