By Zhanna Shayakhmetova in International on 4 May 2020

Kazakh President Kassym-Jomart Tokayev opened up about growing up in a family of veterans as well as his view on foreign policy and relations with neighboring countries ahead of the 75th anniversary of Victory Day in an exclusive interview with Mir Interstate Television and Radio Company on Friday.

Kazakh President and head of Mir TV Channel Radik Batyrshin during the interview.

World War II became a challenge for Tokayev’s father who was brought up in an orphanage after he lost both parents. But he was able to overcome his fears and bury his sorrow.

“My father did not like to talk about the war – especially about his deeds and his military awards like many other front-line soldiers. He shared with us his feelings, the story of his first encounter with the enemy, the courage of the average soldier, and his burning desire to return home – this was all written out in the autobiography “The Soldier Left for War.”

After the war, his father began working as a journalist. He became the founder of the detective fiction genre in Kazakh literature and received a medal for his coverage of the development of Tselina (The Virgin Lands campaign).

“Recently I learned that a memorial plaque dedicated to my father was installed at the war veteran hospital in Omsk where he was hospitalized in February-June 1945. I am grateful to the authorities of the Omsk region and the city for the memory of my father and war veterans,” he said.

Tokayev said that he was named after his uncle Kassym who died during the Battle of Rzhev in Russia. It was one of the bloodiest battles during the war.

“We remember all the war heroes who forever remain lying on the battlefields, who sacrificed everything so that we could have a peaceful life,” he said.

Recently President Tokayev drafted a new law dedicated to honoring veterans and ensuring benefits for them and their families. These veterans will receive 1 million tenge (US$2,400) on the 75th anniversary of the victory.

“The war affected almost every Kazakh family. Therefore, May 9 is a day of remembrance for us. We expanded the list of persons who will receive the benefits. The new law will provide social and legal support to all veterans, including front-line soldiers and people who worked on the home front. It also includes people who participated in other hostilities, including the war in Afghanistan and other hot spots and includes those who participated in the Chernobyl nuclear disaster clean-up,” he said.

Tokayev also contemplated the role of Kazakhstan as a country that can serve as a bridge within Eurasia to maintain a balance between the West and the East.

“I believe that this foreign policy reflects the geopolitical status of our country and its geographical location. But within foreign policy course, we attach major significance to our strategic partnership and allied relations with Russia. These relations are of absolute importance for us,” he said. 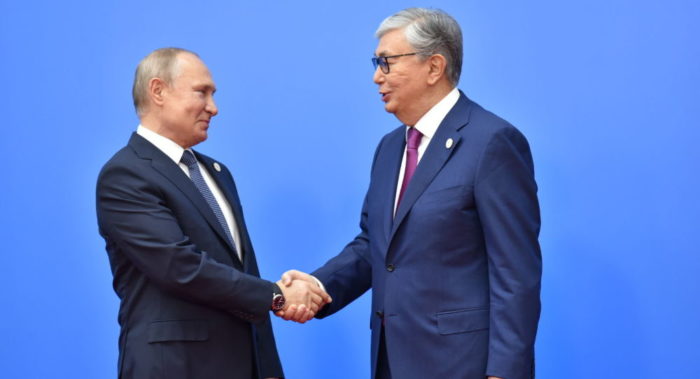 Kazakhstan is a member of a number of Eurasian organization including the Shanghai Cooperation Organization, the Organization for Security and Co-operation in Europe (OSCE) and the Conference on Interaction and Confidence Building Measures (CICA) in Asia. The country is an important link in the framework of transport and communication projects connecting Europe and Asia.

Tokayev himself served at the Soviet embassy in Singapore in 1975-1979. He then worked as second secretary, first secretary and finally as adviser at the Soviet Embassy in China in 1985-1991.

President said that despite some unstable continental dynamics in the Asian region, Kazakhstan has always advocated for preventive diplomacy. In 1992 Kazakhstan proposed to convene a CICA in Asia. This forum serves as a platform for developing collective approaches to solving security problems. Kazakhstan calls upon establishing cooperation between the CICA and the OSCE to use the potential of both forums.

“We stand for an open and inclusive Asia as well as for unconditional respect for the national sovereignty of each country, the peaceful resolution of disputes, and the full consideration of the vital interests of citizens,” he said.

According to Tokayev, the Eurasian Economic Union (EAEU) as a model of regional integration is becoming more attractive for other countries.  The union consists of five member countries – Armenia, Belarus, Kazakhstan, Kyrgyzstan and Russia and, according to Tokayev, “has become a response to global challenges in international relations in recent years.”

The member countries of the EAEU created a single market for goods, services, capital, and labor in just a few years. The business activity of enterprises is increasing. Production and trade associations, joint enterprises are being created. Trade agreements were concluded with Vietnam, Iran and Serbia. The agreements with Egypt and India are being worked out. Singapore has recently joined the EAEU as an observer.

“The main objective of the union is to improve the standard of living of our people through economic modernization. Integration of our economies into regional and global economic systems can become an important mechanism for joining the list of developed countries of the world,” he said.

Tokayev believes that the union will become a strong economic union with an innovative economy, developed industry and a high level of human capital.

Kazakhstan is set to build new relations with China as it is one of the largest foreign trade and economic partners of Kazakhstan. 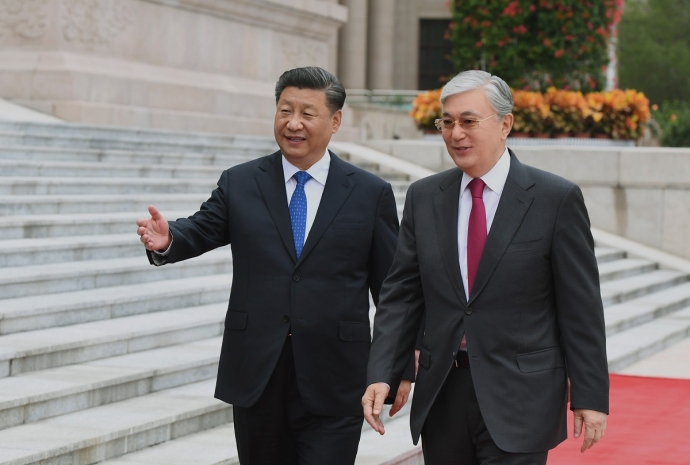 The idea to form the Silk Road Economic Belt was first suggested in Kazakhstan in 2013 during the visit of China’s President Xi Jinping. Last year, Chairman Xi Jinping and Tokayev paid great attention to the expansion of trading ties.

“We are building a mutually beneficial economic partnership between our countries, and cooperation between Kazakhstan and China is quite logical. The Belt and Road Initiative improves existing trade and transport corridors and creates new ones connecting more than 60 countries in Central Asia, Europe and Africa. More than 120 countries and nearly 30 international organizations joined the project. At the same time, the spread of coronavirus means that certain adjustments have to be made to the Great Silk Road project, and we will have to adapt accordingly,” he said.

Kazakhstan also supports economic and trade ties with other countries as part of the Commonwealth of Independent States (CIS). Signed in 2011, the agreement on free trade zone ensures the mechanism of this cooperation.

Twenty-five percent of our countries’ turnover comes from the CIS. For some countries, this figure approaches 60 percent. In 2018, trade exceeded $191 billion with an increase of almost 12 percent. The positive trend continued last year.

“Unfortunately, protectionist rhetoric is becoming the norm for the CIS under the influence of external causes and changing international norms. The protection of manufacturers is put above the agreements reached within the CIS. This trend may intensify in the post-Corona period. Our main task is to maintain economic and trade ties,” he said.

Tokayev, who has a good command of both English and Chinese, feels that knowledge of foreign languages as well as culture and history is a basis for mutual understanding between people.

“We always have a constructive and friendly dialogue with Russian President Vladimir Putin. It is a pleasure to talk to Chinese President Xi Jinping. I have good contacts with the leaders of our neighboring states – the presidents of Uzbekistan, Tajikistan. Recently, the President of Belarus visited our country,” he noted. 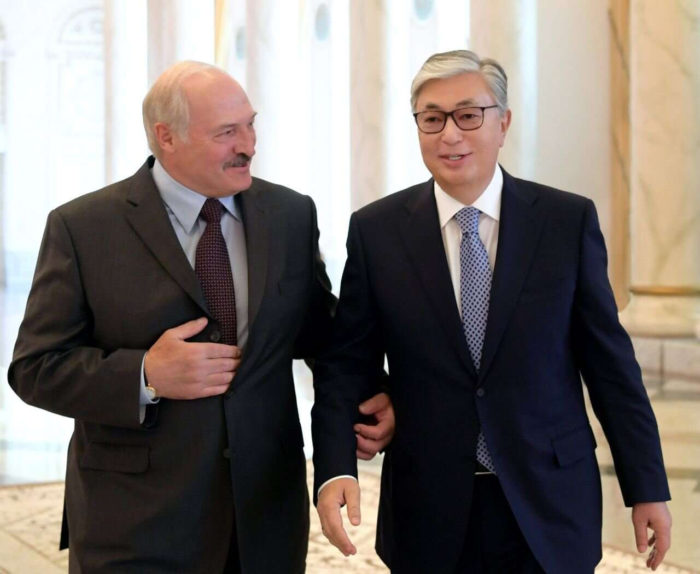 Being a graduate of Moscow State Institute of International Relations (MGIMO) Tokayev organized the MGIMO Alumni Forum in the Kazakh capital in 2017.

“I think that these forums are important. As far as I know, the tradition of holding forums will continue, and I support continuing this tradition,” he said.

Founded in 1992, the Mir Interstate Television and Radio Company was launched by Kazakhstan’s First President Nursultan Nazarbayev. It highlights the political, economic and humanitarian cooperation possiblities within the CIS and facilitates the international exchange of information. The first president of Mir TV channel became the famous Kazakh journalist Gadilbek Shalakhmetov, who worked there until 2002.