Dariga Nazarbayeva has been dismissed from her post as Senate Speaker, the country’s second-highest post, by the decree of President Kassym-Jomart Tokayev.

Maulen Ashimbayev, first deputy chief of the presidential administration, was unanimously voted in to replace her May 4 by a secret ballot among the remaining Senate deputies. He was nominated by President Tokayev himself. 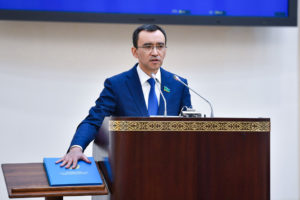 Under the Kazakh Constitution, the senate speaker is first in line to take the presidential office in case of the incumbent’s incapacity, resignation, or sudden death. Nazarbayeva, 56, is the eldest daughter of Kazakhstan’s First President Nursultan Nazarbayev, 79, who resigned the office in March 2019 after nearly three decades in power.

Nazarbayeva became a senate speaker after then senate speaker Tokayev assumed the presidential office, which raised her profile as a potential successor to Tokayev eventually.

Tokayev thanked Nazarbayeva for her “active and fruitful” work on his Twitter account, but the President’s office did not provide any official comments on the reason for Nazarbayeva’s sudden and unexpected dismissal.

Resident political pundit Aidos Sarym believes that the pressing need for unity at the top level in this time of trouble was the underlying reason for the dismissal.

“Those in power will have to lead the country through a triple crisis, from the state of emergency and quarantine, through an anti-crisis program that involves a radical reorganization of the economy and comprehensive structural reforms. All this requires the concentration of all power in the hands of the second president of Kazakhstan. There should not be any hints of a possible split within the elite,” wrote Sarym in his Telegram channel, noting that there would soon be upcoming elections to the Mazhilis and maslikhats (local executive bodies).

Nazarbayeva, as Sarym noted, can now pursue her own political ambitions.

“There is no royal, comfortable and short road to power. (…) At the same time, for all of those who were speculating this year that Nazarbayeva would soon take the office of the president, they should calm down. As you can see, none of this was meant to be,” he concluded.

Andrey Chebotarev, head of the Current Research Institute believes that this is not the end of Nazarbayeva’s political career and thinks that the decision was part of a deal.

“Given that Nursultan Nazarbayev retained all formal and informal levers of influence on the situation in the country, I doubt that the decision came solely from Kasym-Jomart Tokayev or that it signals a breakdown in relations between Akorda and Nazarbayev. Most likely, this was agreed between the first and second presidents and with Dariga Nazarbayeva herself. Everything here is contingent upon the real reason for her departure and how her political career will develop further,” said Chebotarev.

Born in 1963 in the city of Temirtau in the Karaganda Region, Nazarbayeva studied history at the Moscow State University and at the Kazakh State University. Before her political career began, she worked as vice-president of the Bobek Children’s Charity Fund between 1992 and 1994 and headed Qazaqstan national TV channel in 1994 and was there at the very beginning of the establishment of the Khabar national news agency in 1995.

She embarked on her political career in January 2012, when she became a Majilis (lower chamber of the Kazakh Parliament) deputy and headed its committee on socio-cultural development.

Two years later she was unanimously elected Vice Speaker of the Majilis and head of the parliamentary faction of the Nur Otan party. Nazarbayevа also served as Deputy Prime Minister before she was appointed a Senate deputy in September 2016 where she chaired the Committee on International Relations, Defense and Security.

The 49-year-old Ashimbayev now has vast experience serving in some of the country’s highest positions – as an Aide to the President, First Deputy Chair of the ruling Nur Otan party, and Deputy Secretary of Kazakhstan’s Security Council. He also headed the Kazakh Institute of Strategic Studies.

Dosym Satpayev, a prominent political consultant and the head of Kazakhstan’s Risk Assessment Group, said in an interview to KazTAG news agency that a lot will depend on the new speaker of parliament, who is officially the number two person in the country, and that the closeness of Ashimbayev to President Tokayev himself may indicate the continued safe transit of power in Kazakhstan to a new generation of state officials.

The positive side of this process is that this transit is taking place without revolutions and personal defamations, in a smooth and civilized way.

“As for Dariga Nazarbayeva herself, she may be offered a different political position, with a perspective of playing a prominent role during the next parliamentary election,” Satpayev said. “That may be a good chance for her to stay active in the political sphere.”