By Zhanna Shayakhmetova in Nation on 19 May 2020

The Foundation of the First President of Kazakhstan – Elbasy announced the winners of the National Digital Fair of Social Ideas and Projects on May 14. Fifteen out of fifty projects received funding for the implementation of their unique projects geared at promoting civil society initiatives in Kazakhstan. 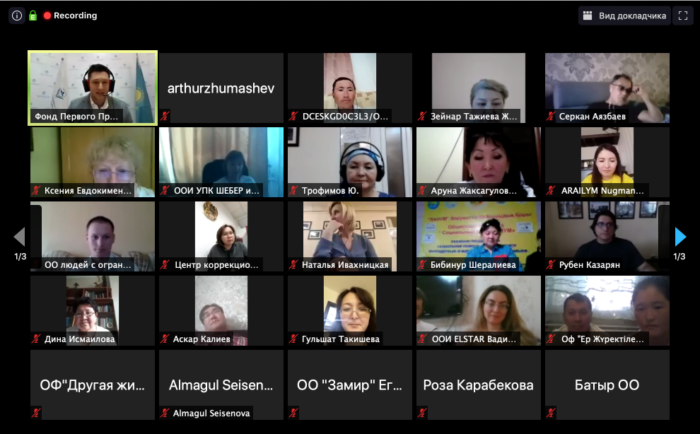 A shortlist of winners: Nur-Sultan based Emoji Café, which only employs individuals with hearing difficulties, a sensor-integrative therapy program for children with autism in Taldykorgan, a mobile social hair salon in Uralsk and other regional projects were crowned the winners of the competition.

Launched in 2004, the competition was organized for the first time in a virtual format due to the countrywide lockdown as the organizers decided not to postpone the final stage to a later date.

This year, the competition concept was implemented along the guidelines set out by the Sustainable Development agenda (SDGs) which was adopted by the United Nations. The contest theme stressed a focus on “local solutions to global challenges” for sustainable development. Winners were chosen on a social justice rubric that focused on spreading an equal opportunities ideology in society as well as sustainable development principles and green social entrepreneurship for SDGs and SDGs.

Experts in the field of promoting NGOs and social entrepreneurship also delivered webinars as part of the event.

PR expert Anna Shelepova shared her expertise in communications between the media and NGOs, how to create informational events, and to organize press events. A certified tracker Daniyar Medetov gave advice on determining the value of any social startup and algorithm cheat codes for target group segmentation.

“The projects are orientated towards solving social problems. We are glad that the number of applications is growing. Of course, it is impossible to support every project, but these initiatives are very interesting. Thanks to this competition, social entrepreneurship can move to a new level, which will hopefully kickstart a new trend,” said Askerov.

The official statistics on the number of social enterprises in the country is not available, according to Kursiv.kz. Thematic forums and conferences started to take place in the 2010s. with companies like Chevron, Alma U, the Civil Society Development Association, the Eurasia Foundation of Central Asia, and the British Council in Kazakhstan giving money and support for these social justice experiments.

This February, President Kassym-Jomart Tokayev met with social entrepreneurs and thanked them for the successful implementation of their projects and said that the government will continue to promote their social justice efforts nationwide.

A brand new forum for promoting these NGOs is expected for this fall.