By Zhanna Shayakhmetova in Nation on 7 May 2020

On May 7, Kazakhstan celebrates Defender of the Fatherland Day. It was exactly 28 years ago, that the nation’s First President Nursultan Nazarbayev signed a decree on the formation of the National Armed Forces to ensure the military security of the country, to prevent armed conflict and to develop the defence capabilities of the Armed Forces. Today, the Kazakh military has been deployed to face the greatest threat to the country’s national security since its inception in 1992 – the coronavirus epidemic. 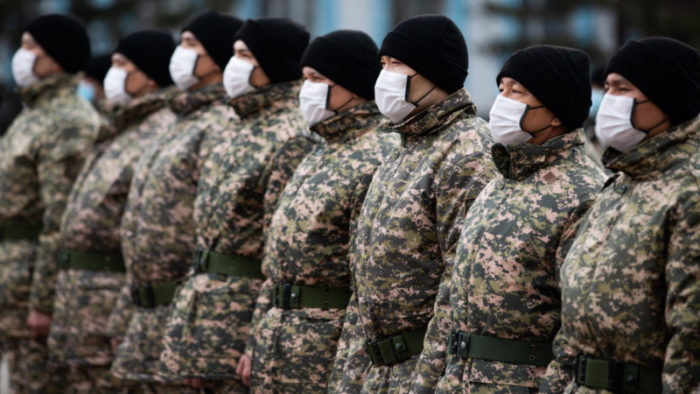 For the first time, volunteer military personnel are also being called in to serve their nation in the battle against coronavirus as the Kazakh government has decided to double-down and tackle the spread of the virus head-on. The country has been in a state of emergency since April 2 and this may not change anytime soon.

“We are putting out a call for volunteers who are ready to help their country. We are paying close attention to the kind of specialists that will be needed in a particular region. The Ministry of Defense recommends that military registration and enlistment offices conduct a sweep for volunteers in their regions, especially young people who do not suffer from chronic diseases,” reads the ministry’s release.

Dates of service are to be set by local akimats (local administration) and may last from 10 days to three months.

The army has asked for officers no older than 60 and rank-and-file staff including sergeants up to 50 years of age with good health to answer the call. A salary will be provided for recruits who work and those who do not work will receive duty pay. Meals, travel expenses and protective equipment will also be provided. Men with three children who are under 18 years of age are exempted from the call.

The volunteers are already working at checkpoints and city facilities with coronavirus infections and patrol the streets in Nur-Sultan keeping law and order. All of them have had to undergo a mandatory medical examination.

At the moment, approximately 200 military personnel are operating near hospitals and checkpoints to provide assistance in the Atyrau region. They help police officers fill out questionnaires and measure the body temperature of drivers. Sixty-eight volunteers patrol the streets of the city at night.

“People are glad to see us. We try to perform our job well in every house. When people thank us, it gives us motivation. It gives us strength,” military officer Yerzhan Dilmanov told Strategy2050.kz.

“The President signed a decree offering state awards to people who showed courage and dedication to their duties in extreme situations and those who made a significant contribution to ensuring the national security and defense of the country by strengthening the rule of law and providing public order,” according to Akorda.kz.

Earlier, the President announced that military draft will be resumed after the end of a state of emergency and will last until August 31. The recruitment was supposed to be completed in spring but this year it was suspended for the first time in memory due to the coronavirus pandemic.

More than 17,000 male individuals aged 18-27 are to be recruited and all of them will be tested for coronavirus. The term of military service will last 12 months.

Recruits will be subjected to a rigorous and intense epidemiological checklist at the start and during the course of the service.