By Zhanna Shayakhmetova in Central Asia on 11 May 2020

On May 10, the Kazakh Prime Minister Askar Mamin and Uzbek Prime Minister Abdulla Aripov visited the recently flooded areas in the Maktaaral district and the villages of Nurlyzhol, Orgebas and Firdousi in the Zhanazholsky district. Kazakhstan and Uzbekistan are working together to tackle the flood damage after the partial collapse of Uzbekistan’s Sardoba reservoir dam on May 1 that impacted the border areas in the Turkestan region. 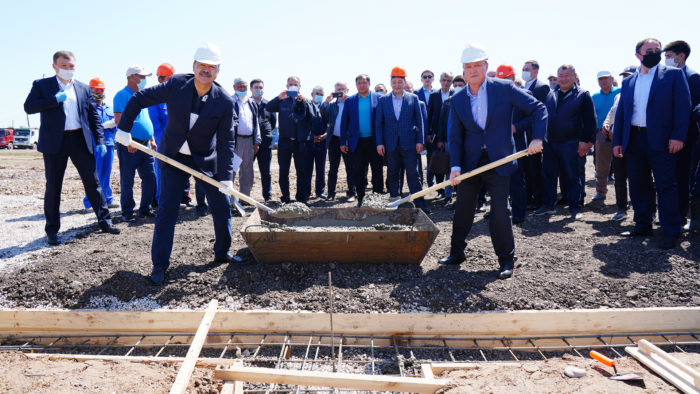 A new district will be built in the Myrzakent village to accommodate 500 families from the Zhenis, Zhanaturmys and Dostyk villages that got flooded.

More than 1,300 people and 220 vehicles including more than 200 specialists and 100 fire engines, excavators, tractors, water pumps and other technical equipment from Uzbekistan, are involved in the emergency rescue operations.

Houses, schools and paramedic centers will be built to accommodate the  displaced families in the village. Experts from both countries will be engaged in construction works.

The Kazakh Prime Minister said that the people who suffered flood will be fully provided with the new or renovated houses. They will also receive a payment worth 100,000 tenge (US$240) to help them get back on their feet. 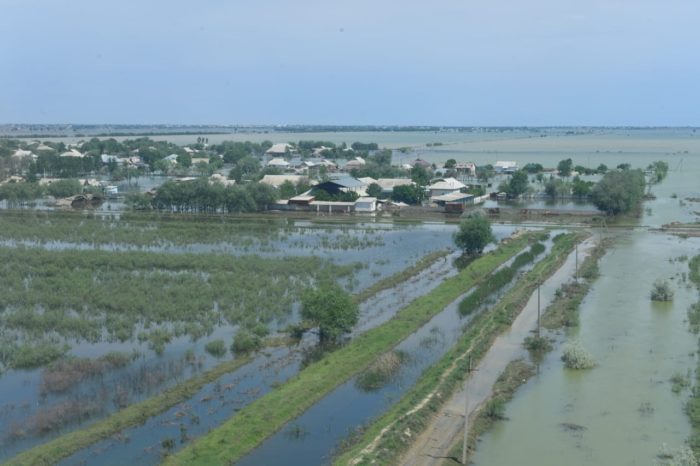 The flooded areas in the Maktaaral district. Photo credit: Primeminister.kz.

A state of emergency was declared in the region with Deputy Prime Minister Roman Sklyar of the Kazakh government heading up a commission to coordinate efforts with the heads of central and local executive bodies.

“The commission will assess damage in five villages and begin work to restore transportation, social infrastructure and housing to affected residents. The government will provide all necessary assistance to the people,” said Mamin at the meeting on May 5th.

Earlier, Kazakh President Kassym-Jomart Tokayev and Uzbek President Shavkat Mirziyoyev discussed the joint efforts of both countries focused on eliminating the consequences of flooding in the border regions.

“The heads of state appreciate the cooperation of all parties involved in organizing evacuations and social support for the population, as well as the restoration efforts,” reported Akorda.kz.

Mirziyoyev noted that the Uzbek and Kazakh people are committed “to overcoming any further difficulties that may arise in the spirit of friendship and good neighborliness.” The Uzbek government will continue to provide assistance while taking into account the interests of Kazakhstan and the principles of international law.

“We are located in one river basin and we must work to ensure the fair and rational use of water resources, as well as to prevent threats and challenges of a transboundary nature on trust and transparency,” said Tokayev.

The presidents agreed to further improve the mechanisms for joint management and use of resources of transboundary rivers and to establish a permanent commission to deal with it.

Kazakhstan evacuated 31,606 people from 14 villages after the reservoir collapsed. More than 600 houses flooded and five villages with a population of 6,127 people were completely destroyed. Some 3,600 hectares of agricultural land were also affected. Loss calculations are still underway.

Emergency works to prevent flooding were implemented in the Myrzakent village with a population of 15,000 people.

In Uzbekistan more than 70,000 people from 22 villages were evacuated, four people were killed and approximately 60 were injured.

The Sardoba reservoir was built on an area at the center of the South Mirzachul Canal network in 2017. The hydroelectric facility impounds 922 million cubic meters of water, which is intended for irrigation of the lands of the Syr Darya and Jizzakh regions in Uzbekistan.