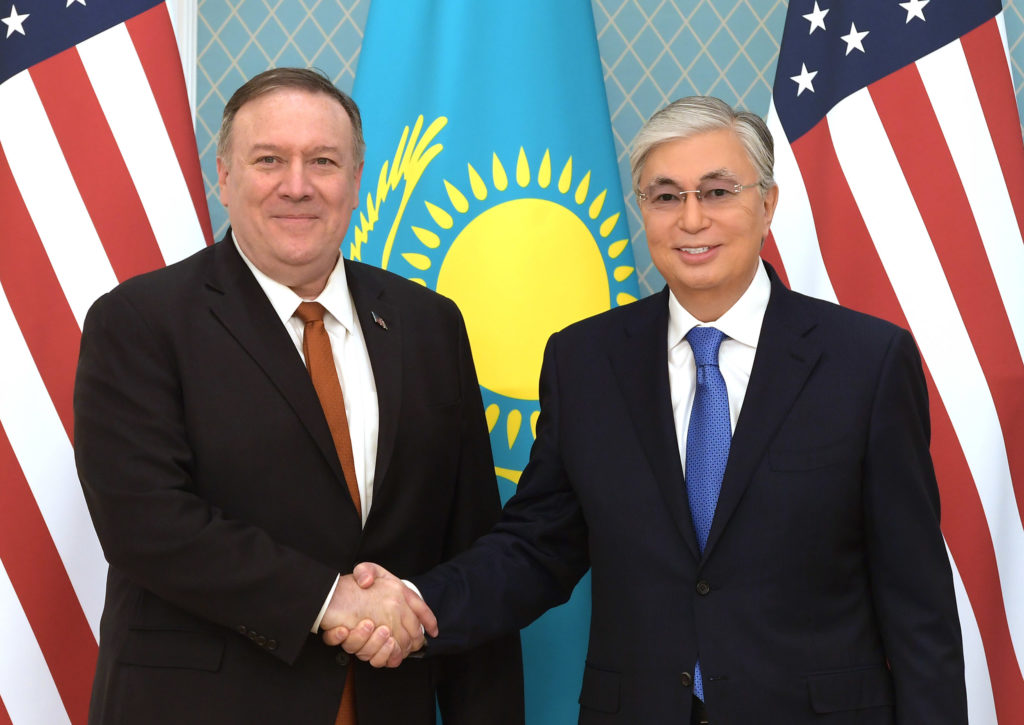 The visit was part of Pompeo’s multi-country tour, which began Jan. 29 in London. He them visited Kyiv and Minsk before coming to the Kazakh capital. His tour will finish in Tashkent.

While in Nur-Sultan, Pompeo met with Kazakh President Kassym-Jomart Tokayev, First President Nursultan Nazarbayev, Foreign Minister Mukhtar Tileuberdi and other senior officials. For Pompeo and Tileuberdi, this was their third meeting since September after the two met in New York and in Washington in December.

Tokayev, who met U.S. President Donald Trump on the sidelines of the 74th session of the United Nations General Assembly in September, and Pompeo stressed the need to deepen cooperation in trade, investments, IT technologies, the promotion of democratic values and the fight against terrorism.

“The U.S. was the first country to recognise the independence of Kazakhstan, and we will always remember this historical fact. Our countries have very close relations in many areas, including non-proliferation of nuclear weapons, the fight against international terrorism and economic cooperation. At the same time, I believe that we have a good potential that can be used to further expand cooperation,” said Tokayev.

During the meeting, Pompeo praised Kazakhstan’s Jusan operation that returned 600 Kazakh citizens, including more than 400 children, from Syria. He said the effort is a model for other countries. Pompeo also noted Kazakhstan’s ongoing efforts to promote peace and reconciliation in Afghanistan. 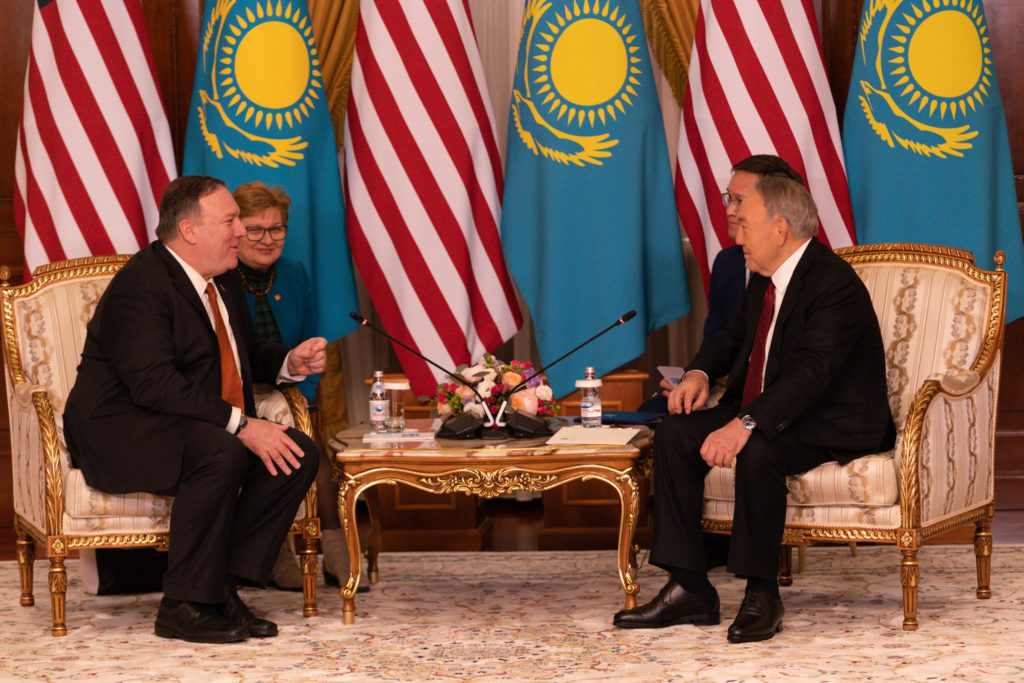 During the visit to Nur-Sultan, Pompeo also discussed global and regional issues with Nazarbayev. The U.S. official praised the depth of bilateral ties that began under Nazarbayev’s leadership. Nazarbayev visited the U.S. in January 2018 and met with Trump. The meeting with Trump brought bilateral ties to the level of an extended strategic partnership.

Tileuberdi and Pompeo also spoke at a press conference that gathered Kazakh and American journalists travelling with Pompeo.

Speaking to journalists, Tileuberdi said the strategic partnership with the U.S. is founded on “firm and predictable relations intended to support peaceful development and prosperity.” He also thanked the United States for its systematic support of Kazakhstan. The United States is the biggest investor in the Kazakh economy.

“Nur-Sultan and Washington are leading a quality dialogue at different levels and through a different format of platforms to develop mutual cooperation in political relations, trade, economy and investment mutual cooperation, security and the fight against international terrorism, disarmament and non-proliferation, human rights and religious freedom, and other areas,” said the Kazakh minister.

The sides now seek to diversify investments. Kazakhstan sees the United States as a “source of investment, new technologies and knowledge, as well as world-class standards.” 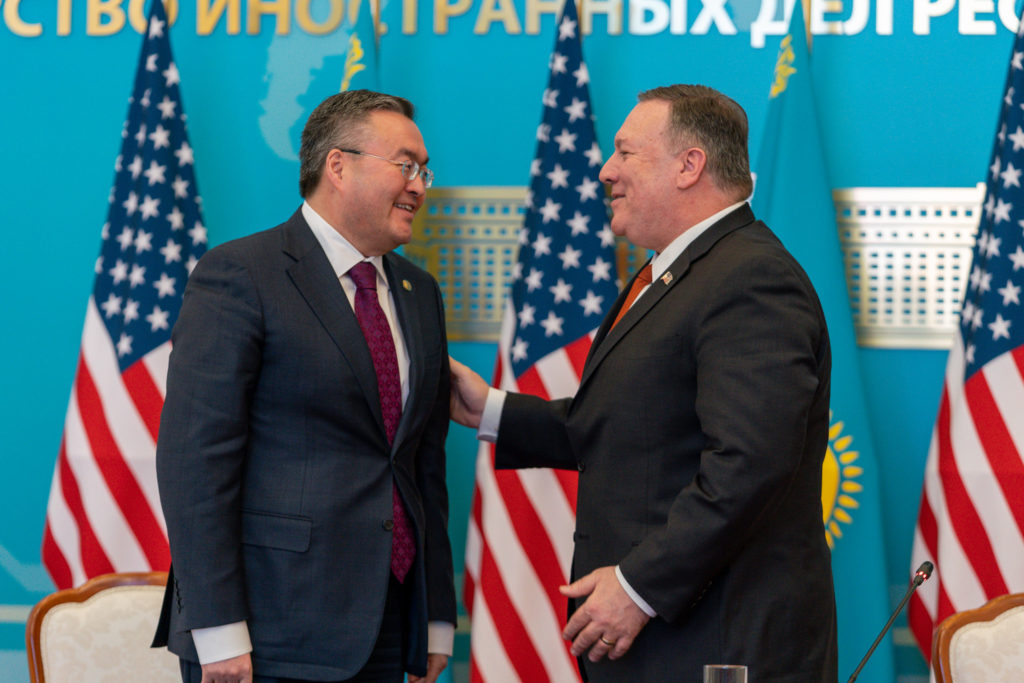 “During our meeting with the U.S. Secretary of State, we paid attention to expanding the legislative and regulatory framework with new agreements, to further diversifying the economic partnership and strengthening the interaction with the U.S. in the regional format,” Tileuberdi said.

Recently reached agreements include an agreement with American agricultural giant Tyson Foods to build a modern meat processing complex and an ecosystem to develop livestock production in Kazakhstan. Tileuberdi described the agreement as a “first signal for American companies to invest in other areas,” alluding to the overwhelming concentration of investments in the oil and gas sector.

Kazakhstan and the U.S. also signed an open skies agreement in December that will facilitate the launching of direct flights.

The Kazakh minister also noted cooperation in fighting international terrorism, extremism and the spread of radical ideology. He said Kazakhstan will continue its partnership with the U.S. State Department to rehabilitate and reintegrate citizens returned from conflict zones in Syria and Iraq.

The U.S. has been a long-time friend to Kazakhstan, said Pompeo.

“Just 24 hours after your independence back in 1991, almost 30 years ago, my predecessor, Secretary of State James Baker, travelled here to support your vision for a sovereign, prosperous nation. Since 1993, we have worked closely on non-proliferation and nuclear security together. And more recently, in January of 2018, President Trump welcomed then-President Nazarbayev to the White House. It was a great meeting. I was there. Our conversations today reaffirmed those same commitments about a bright future between our two countries,” said Pompeo. 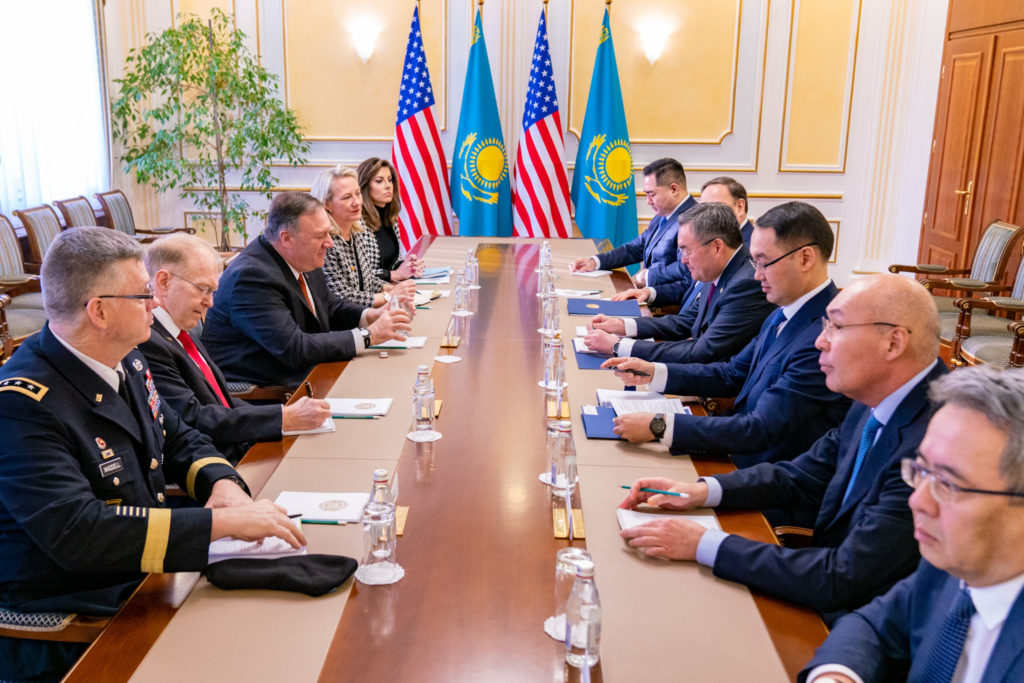 The Trump administration is preparing to unveil its new Central Asian strategy soon, which, as Pompeo noted, puts “independence and prosperity at the core of our approach.”

“We fully support Kazakhstan’s freedom to choose to do business with whatever county, whichever country, it wants. But I am confident. I am confident that countries get the best outcomes when they partner with American companies,” said the American statesman.

America’s Chevon and ExxonMobil are among the biggest investors in the Kazakh oil and gas sector.

“Partnerships like these are good for all of our people. They are the best way for Kazakhstan to grow, to prosper, to have its own security and have great economic ties not only with the U.S. but throughout the region,” said Pompeo.

Pompeo continued, saying: “The sky is the limit with respect to the things that we can do together to work between our two countries. The American risk-taking entrepreneurs will love the hardworking, capable, talented people here in Kazakhstan to be part of their teams, and we will do good things for American business and for the people of Kazakhstan when we get all of these opportunities brought to fruition. There are many projects in the pipeline, and I look forward to being able to come back here not too terribly far in the future and announce major gains for American investment right here in Kazakhstan,” said Pompeo.

During the press conference, Pompeo also mentioned U.S. efforts to help Kazakhstan in dealing with the coronavirus outbreak, which causes pneumonia-like symptoms and for which there is no vaccine.

“As of yesterday early evening, there were 46 potential cases under investigation here in Kazakhstan. Quick action to stop the spread of the virus has been incredibly impressive. The fact that your country shares roughly 1,100 miles, almost 1,800 kilometres, with China was obviously a cause for concern, and so you acted. But the people of Kazakhstan aren’t alone in their vigilance against this tragic outbreak. The U.S. Centre for Disease Control and Prevention maintains a presence in your country here in Kazakhstan,” said Pompeo.

Pompeo and the foreign ministers of the five Central Asian countries also took part in a C5+1 ministers meeting Feb. 3 in Tashkent, which wrapped up Pompeo’s five-country tour.