By Nazira Kozhanova in Kazakhstan Region Profiles: A Deep Dive Into the Heart of Central Asia, Tourism on 9 January 2020 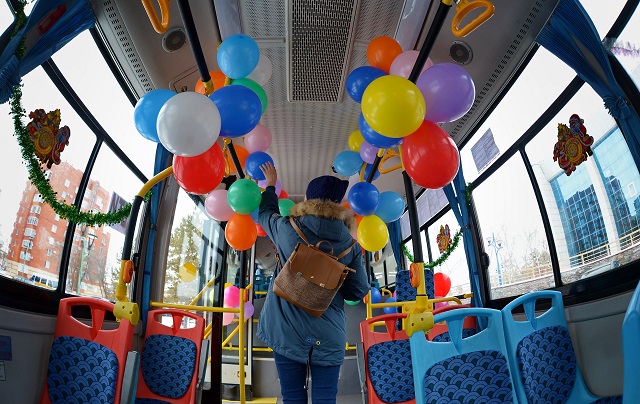 The project is in pilot mode until Jan. 15, with tours hosted by the region’s history museum employees. Pavlodar State University students would eventually serve as guides to fulfil their credit-bearing internships.

The pilot tour includes stops at the Blagoveschenski Cathedral, with nine bells, the largest weighing 1,024 kilogrammes, imported from Moscow, Russia; Goose flight paleontological site, which was discovered in 1928 and has the remains of more than 60 types of animals from the Miocene and Pliocene eras and Mashkur Jusup Mosque. The final locations are the Pavlodar central embankment, Yertys Museum and the Chief’s Museum house.

“Anyone can contact the department of entrepreneurship of the city; there is a specialist there and he will include everyone on the list. At 12 p.m. every day until Jan. 15, this bus will run for free in test mode. After the pilot regime, we will determine for ourselves the main stops, work out the route and determine the cost of the tour taking into account the programme and visiting museums. We are counting on everyone – guests and residents of the city who want to learn something interesting, unique. The main thing is that people have an interest, but in our city, there is something to show,” said Deputy Akim (Mayor) Arystan Kenzhegalinov.

Pavlodar is in the eastern Kazakhstan, where tourism development is underway, regional Tourism and External Affairs Administration head Marat Kabakov told inobusiness.kz. In particular, the region has invited experts from the Asian Development Bank to determine development priorities.

“We are working to attract foreign experts to form a package of recommendations on the development of winter tourism through the Asian Development Bank. Within the framework of this project, we are planning to study international experience in creating a tourism cluster, including effective measures of state support for the industry, with a detailed reflection of the basic principles, approaches and recommendations for use in our field. Also, [we want to complete] an analysis of the current situation, assessment of the uniqueness of natural resources, determination of demand, dynamics and potential for increasing tourist flow, tourism income and so on,” he noted.