NUR-SULTAN – KELT, the country’s first English language theatre, was founded in 2001 in Almaty by the Kazakhstan Institute of Management, Economic and Strategic Research (KIMEP) University. It provides an opportunity for non-professional actors to receive professional-level stage training and experience and teaches discipline, integrity, time management and leadership skills, said artistic director Jessica Lewis in an exclusive interview for this story. 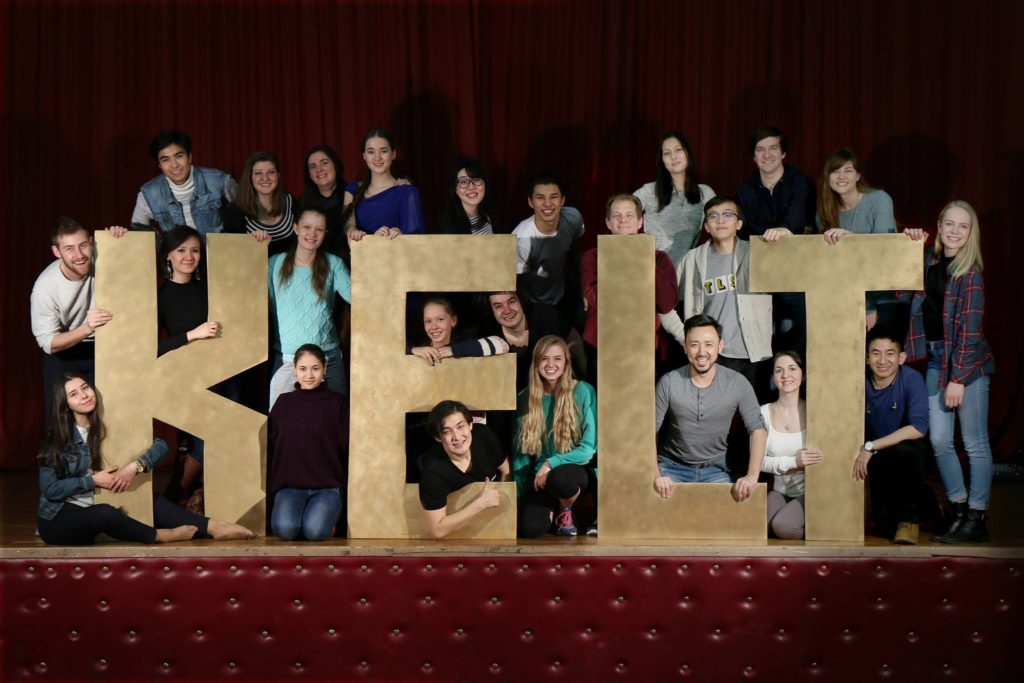 “We also provide a community for people. We are like a family and are invested in one another’s lives,” she added. “KELT is an organisation that is more focused on the people rather than the product; developing people from their character to theatre skills. All the while, we pride ourselves on doing excellent and quality work.”

The theatre adheres to the slogan “Once in KELT, forever in KELT.” Anyone who has ever been in a KELT production is part of its “family.”

Directors hold new auditions for each show. Casting is open to anyone, not just KIMEP students. Actors are not required to have previous experience, but need to commit to intensively working five nights per week.

“Everyone is welcome at the auditions – from those with extensive theatre experience to those who have never set foot on a stage before,” said Lewis.

KELT is distinguished by its diversity and includes people from various nationalities and backgrounds.

“We have had actors who’ve worked in oil companies, big ten companies; we had a pilot once, a TV producer, circus artists, accountants, English teachers,” she said.

Some actors studying marketing or business decided instead to pursue acting and several subsequently received a Master of Fine Arts (MFA) in Acting and Film.

KELT originated from KIMEP students’ interest in opening an English language theatre. In response to the request, the Dean of Student Affairs offered the leadership to Nathan Fleming, an American teacher with a theatre background, who gladly agreed to become its director.

In 2006, Fleming organised a summer tour across Kazakhstan to celebrate the theatre’s fifth anniversary and invited two American actors, including Lewis. She spent four years studying theatre at Temple University in Philadelphia, Pennsylvania, then received her MFA in Acting from the University of Iowa.

“I spent two months in Almaty working with KELT and traveling around Kazakhstan. It was my first time outside of the United States,” she said.

At that time, Lewis had just received her Master’s degree and intended to pursue an acting career in the United States. The summer in Kazakhstan changed her plans forever.

“I fell in love with Kazakhstan, the people and KELT. I returned to the States and a few months later, Nathan contacted me and asked if I would come back in a year to direct for KELT while he was scheduled to be in the States for a five-month stint,” she said.

A year later, Lewis began directing KELT works. When Fleming returned to Kazakhstan, he announced he was moving to Atyrau and asked her to become the permanent director.

In 2011, American teacher Laura Pacini moved to Kazakhstan to teach at an international school and joined KELT as a co-director. She received her Bachelor’s Degree in Theatre Education at the University of Northern Colorado and has an extensive background in film production.

KELT usually has two main productions each year surrounded by smaller projects. The cast rehearses two-three months for a production, assembling four-six nights per week and three hours each time. All performances and rehearsals are conducted in English.

During rehearsals, actors do extensive vocal and body warm-ups and are taught to analyse their character and script to bring as much truth to the role as possible.

“We strive to create an atmosphere of safety where actors are willing to take risks, go outside their comfort zones and be vulnerable,” said Lewis.

One of the theatre’s popular and meaningful productions, “Playback,” is characterised as “social theatre.” It involves improvisation where the actors “play back” stories told by the audience. The actors listen intently and empathetically without planning or speaking, then immediately replay the story using only instruments and different-coloured fabrics and chairs. By presenting the essence of what they heard, they show the audience that their stories are worthy of being made into stage art.

“It is a form of theatre that unites everyone and says ‘the story of one is the story of all of us,’” she added.

The actors train in this form of improvisation throughout the year and occasionally add new members to the playback cast. It is a type of theatre that they can perform anywhere and at any given time.

One of the most popular KELT performances was spring 2017’s “Cinderella.” The work, presented at the Schoolchildren Palace in the capital and sponsored by the city akimat (administration), was the first known licensed Broadway production presented in Kazakhstan and attracted more than 4,000 audience members.

Cinderella was played by Abby Gilbert and the Prince by music channel Gakku TV General Producer Timur Balymbetov. They were invited to the capital to appear on Nurlan Koyanbayev’s late night show.

KELT will present “These Shining Lives” by Melanie Marnich April 24-26 at KIMEP. The play tells the true story of four women working in an American factory in the 1920s by painting watches with radium – a substance which glows in the dark and is highly radioactive.

Lewis noted the play illuminates the danger working women had faced in the early part of the 20th century due to companies and management turning a blind eye to life-threatening factory issues. The women’s courage to stand up against hostile corporate money-making machines as well as criticism from the public paved the path for safer work conditions and protocols. The United States and the world continue to experience the positive outcomes of their brave actions.