By Nazira Kozhanova in Astana on 31 January 2020

NUR-SULTAN – The capital’s local history festival kicked off Jan. 25 with a multimedia exhibition and public discussion of architectural heritage. 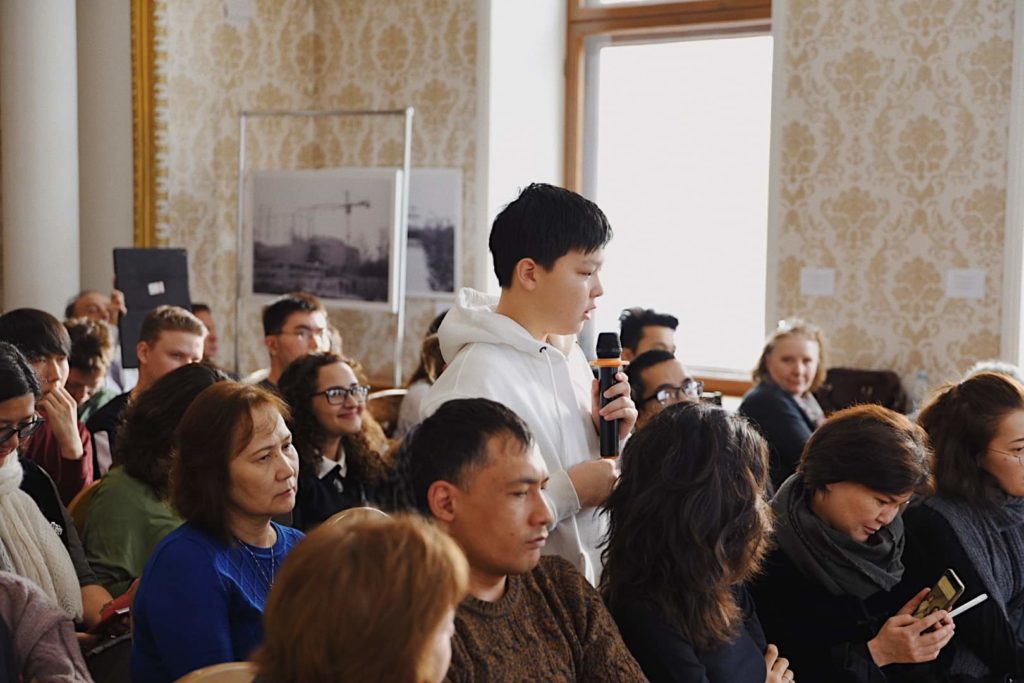 “The festival was meant to be a dedication to the city and consisted of a discussion panel, where we tried to raise the questions and stimulate the dialogue about architectural heritage, what it is and what we, as city residents, can do to save, study and popularise it for the first time,” said Nazarbayev Intellectual School Manager Temirtas Iskakov.

The public talk gathered architecture, museum heritage and urban studies experts who discussed the role of memory and architectural heritage in the city. They spoke about environmental unity in conjunction with city architecture.

“It is difficult to separate architectural monuments and simple houses. In architecture, a separate object is not so important as a separate object in the environment. The environment affects the object and the object affects the environment and you can delicately adjust new buildings to existing historical ones. Objects reflect history. For example, when the city was a nodal station, there was the Palace of Railwaymen. In the years of virgin lands, the Palace of Virgin Lands was established. Later, the Youth Palace appeared,” architect Vasily Toskin told vechastana.kz.

The speakers also touched upon adequate preservation of the heritage by addressing the need to account for and preserve monuments.

“Before independence, there were 123 protected monuments. A lot of them at that time belonged to the state ideology. Now, there are 44 monuments at the local level in the protection category and two objects at the national level – the Virgin Lands Palace and the Muslim school on Otyrar Street. A directorate for the protection of monuments was created. They expanded the list of objects. Today, there are 96 of them. The problem is with monuments of archaeology; there are 12 of them in the city. From this list, objects are dropped without argument,” former Director of Museum of Contemporary Art Nelly Shivrina told vechastana.kz.

“The second part was the exhibition itself, i.e. another way to popularise and visualise the legacy. The exhibition also had a goal to activate this historical space, the Kubrin house that currently belongs to the city archive. It was an experimental attempt to return the local museum to the city and the city history museum. We tried to fill the second living floor with content and to invite city residents there to open the doors of this space to city residents, so on weekends until Feb. 10 they could come and spend time here,” said Iskakov.

The multimedia exhibition featured works of 10 contemporary and historic capital artists, including historic photographs, installations, audio and video works and artefacts, including pieces of the glass mosaic once featured on the House of Rites wall and a restored phone booth. Both the talk and the exhibition were organised by the @fading.TSE history research and popularisation project within the SPACES.nur-sultan city festival with the help of Soros Foundation Kazakhstan.

“Of course, I was a bit worried that no one would show up, or not many people would come. But in reality, there were a lot of people of different ages. What’s more important to me is that it wasn’t some elite event. Instead everyone came – experts, regular city residents, young people, old city residents, schoolchildren. What’s more important is that everyone found the exhibition to be soulful and cozy. Even though our exhibition is not large, everyone noted that we put our soul into it. That’s what matters to me,” he added.

The exhibition will continue through Feb. 15 in the Kubrin house at 37 Kenessary Avenue.