NUR-SULTAN – The government hosted a press conference Dec. 25 to share the country’s plans for next year, including increasing support for entrepreneurs and the social sector, reported the prime minister’s press service. Deputy Prime Minister Berdibek Saparbayev, Minister of Healthcare Yelzhan Birtanov and Minister of Labour and Social Protection Birzhan Nurymbetov were in attendance. 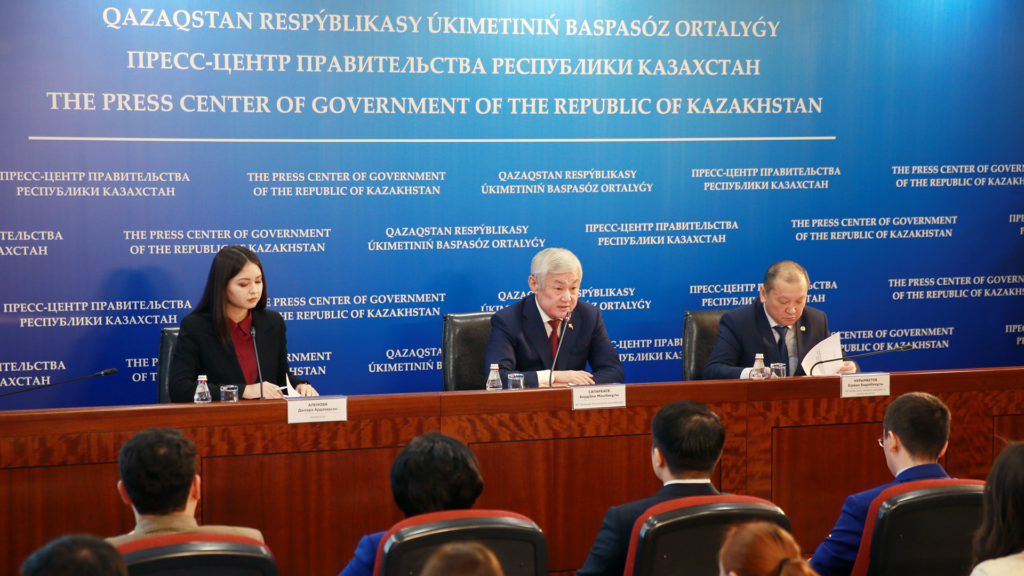 The government has attended more than 500 meetings with citizens nationwide, including in remote areas, at the instruction of President Kassym-Jomart Tokayev, said Saparbayev. Citizens made 70 suggestions and the ministers responded to 2,500 questions.

The Enbek state programme reached 623,000 citizens with measures to promote employment and entrepreneurship, including 416,000 who gained jobs and 131,000 who received training. The nation allocated 176 billion tenge (US$462.4 million) to provide 46,000 grants and microloans and relocate 9,000 people from the overpopulated south of the country to the north.

Enbek, in place since 2017, will undergo several changes in 2020. New programmes, such as First Job and The Contract of Generations, will allow employers to submit applications for short-term professional staff training.

The government will ease loan requirements for large and low-income families in an effort to stimulate their entrepreneurial activity. The interest rate will be reduced from 6 percent to 4 percent and the term increased to seven years from the current five years.

“There are currently 690,000 people with disabilities, of whom 424,000 are of working age, and of the 224,000 who can work, 106,000 work. We set ourselves the task to take measures to increase their economic activity. One of the problems is that people with disabilities are not hired. We have the legislation which says that local executive bodies can set a quota for enterprises (to hire people with disabilities), which is now from 2 percent to 4 percent. The quota has 14,500 units, but it is not fulfilled,” he noted.

The government will allocate 400 billion tenge (US$1.05 million) to pay allowances and ensure technical rehabilitation services. A recently adopted national plan through 2025 will ensure their rights and improve their quality of life.

“Different countries have different approaches. For example, in Canada, if a company does not comply with the quota, it is not allowed (to receive) public procurement. There is another experience, in Germany and Japan, when the government says either fulfil the quota, hire a person with a disability or pay compensation,” he added.

Rehabilitation centre construction will begin in 2020 in Almaty, Kokshetau and the capital. The government is considering developing a chain of centres as part of a public private partnership (PPP) with the national insurance fund.

An online social services portal, where people with disabilities can select their rehabilitation means and services, is currently operating in pilot mode. Additional measures include the approved list of diseases enabling a person to receive a disability document for five years, comprehensive assistance roadmap for children with disabilities and measures to strengthen monitoring employers’ compliance with the quota to employ persons with disabilities.

The recent ministerial/Prosecutor’s Office inspection of 95 companies employing more than 30 foreign workers each revealed in excess of 1,000 violations of the Labour and Migration Code, including more than 500 cases of disproportional salaries. A 100-million tenge (US$262,728) investigation of 400 administrative cases was opened, nearly 700 work permits were withdrawn and 500 foreign workers were deported.

Next year, the government plans to reduce the quota for hiring foreign workers from 49,000 to 29,000, strengthen employers’ administrative responsibility and ensure regular inspections at companies employing more than 30 foreign workers. The measures will add to the country’s gradual effort to replace foreign workers with local specialists.

Birtanov also spoke about the recently adopted State Healthcare Development Programme for 2020-2025. The introduction of a mandatory social insurance system as of Jan. 1, 2020, will increase spending for one person by 57.5 percent, from 55,000 tenge (US$144.50) to 87,000 tenge (US$228.50). It will also enhance the medical infrastructure and increase the level of medical equipment by 70 percent.