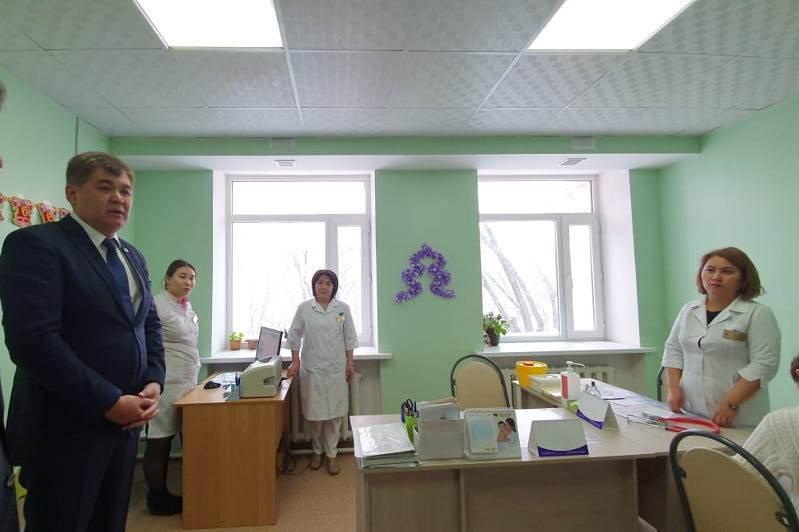 Among medical institutions the minister visited were the Central Railway Hospital, Perinatal Centre No. 3, the Dermatovenerologic Dispensary and City Polyclinic No. 2. The minister evaluated the work and the integration of medical information systems and noted the classification of patients by insurance status and the registration of citizens who have not yet become participants of the health insurance system.

Birtanov said all technical gaps in the compulsory social health insurance system should be addressed in favour of the patient and the population should feel an improvement in the quality of medical care after the implementation of the system.

According to specialists at City Polyclinic No. 2, approximately 440 people visit the clinic daily and more than 60 percent of them have insurance.

Birtanov said at least 80 percent of population should be insured, according to the ministry’s estimates. He added children, pensioners, disabled people, pregnant women and students are included in 15 privileged categories for which the government makes contributions to the Health Insurance Fund.

The minister also added the compulsory social health insurance system increased funding for rehabilitation assistance by 12 times, and it is expected that more people will now use such services.

The rehabilitation department of the City Polyclinic No. 2 launched in January 2020. It provides social, psychological and medical support for disabled people, a new type of service in Kazakhstan. Both adults and children can receive the treatment in the hospital.

Since July 2019, a rehabilitation department has operated in the clinic for children with central nervous system disease, delayed psycho-speech development, Down syndrome and autism. According to the head physician of the clinic, the centre was opened first among all medical organisations.

The minister also visited the Central Railway Hospital, which has completed repairs of two buildings for the relocation of hospital departments. Birtanov noted the expanded emergency room area and the optimisation of unnecessary rooms. He also instructed the hospital administration to smooth the flow of patients and finish the repair of the surgical building.

From Jan. 1, Kazakhstan began providing medical care in two packages – a new model of the guaranteed volume of free medical care and a package of compulsory social health insurance. Emergency and primary health care including basic diagnostic services remain free for all citizens, oralmans (ethnic Kazakhs who have immigrated to Kazakhstan since independence) and residents of the country. Consultative and diagnostic assistance and treatment in day hospitals and round-the-clock hospitals is provided free of charge only to insured citizens and patients with major chronic diseases such as diabetes mellitus, arterial hypertension, cancer, tuberculosis and hepatitis.