By Aidana Yergaliyeva in Nation on 14 January 2020

NUR-SULTAN – A Kazakh government commission assessing the Dec. 27 crash of a Bek Air plane near Almaty has found icing to be the most likely cause of the accident, Deputy Prime Minister Roman Sklyar told a Jan. 10 Central Communication Service press briefing. 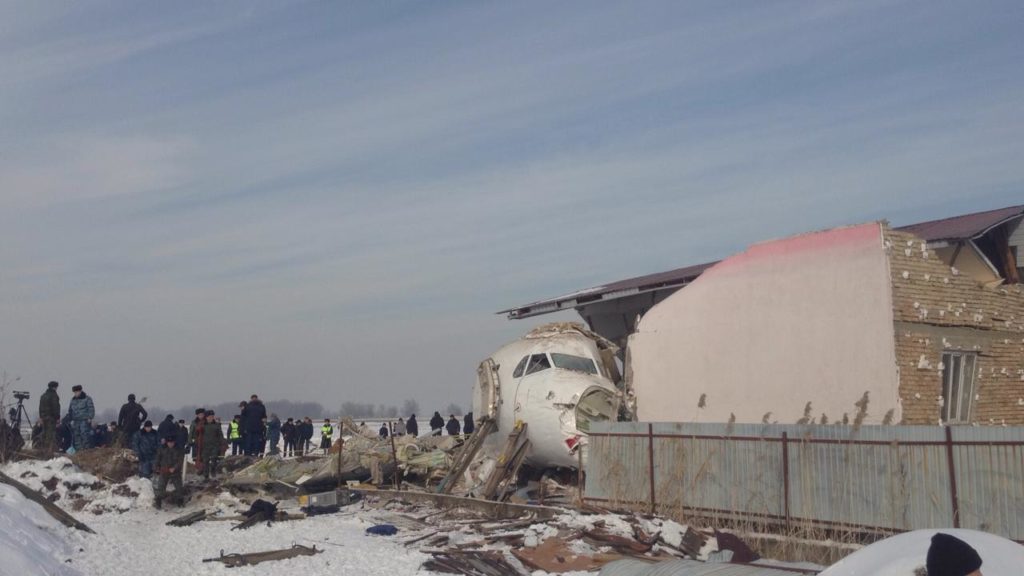 The Bek Air Fokker 100 plane collided with a two-storey building near Almaty Dec. 27, killing 12 people out of almost 100 on board, including the captain. The commission has investigated four possible causes of the crash: commercial loading errors that affected aircraft centring; external factors like icing, weather conditions or satellite delays; pilot error; and aircraft failure.

“[T]he probability of ice deposition on the surface of the aircraft, which had been parked for about two days under weather conditions… is not excluded,” Sklyar said, reported kursiv.kz. “Thus, taking into account the studied meteorological information and analysis of the parametric data of the flight recorder, the main theory of the crash is the icing of the aircraft theory.”

The commission continues to work with the Interstate Aviation Committee, specialists and the Netherlands Authorised Accident Investigation Authority.

According to Sklyar, the commission ruled out errors in commercial loading and aircraft centring because the wind in the strip was steady at a speed of one to two metres per second.

“Under these conditions, based on the direction and speed of the wind, the time interval between take-off aircraft, and this was 110 seconds, under these conditions, the satellite track has calculatedly shifted to the left by a distance of at least 50 metres from the runway. Accordingly, it could not have influenced the emergence and development of a special situation,” Sklyar said.

There were no reports of wind shear from another aircraft taking off Dec. 27, he added.

The commission hasn’t found evidence of an aircraft malfunction or abnormal operation of aircraft and engine systems, but work continues and the investigation might take more than a year, sputniknews.kz reports.

Sklyar also read a portion of the conversation between the pilots before the crash.  At 7:20 a.m. 10 seconds after take-off, the second pilot reduced the engine operating mode and tried to stop the flight. The right roll of the aircraft began to develop.

Co-pilot: I do not know what happened, a stabiliser, slow down, *profanity*

(the co-pilot is probably shifting the engine control levers to idle).

(probably the commander moves the control levers to take-off mode).

At a height of five metres, the cleaning of the chassis began,” Sklyar read the transcribed conversation.

The Fokker 100 airplane’s airworthiness certificate was issued in May 2019. The plane that crashed was built April 9, 1996, in the Netherlands. The Kazakh Aviation Administration suspended Bek Air’s airworthiness Dec. 27.