By Elya Altynsarina in International on 23 January 2020

NUR-SULTAN – Kazakh Foreign Minister Mukhtar Tileuberdi made his first visit to Brussels Jan. 20 to participate in the 17th meeting of the Cooperation Council of the Republic of Kazakhstan-the European Union and meet with high-level officials. 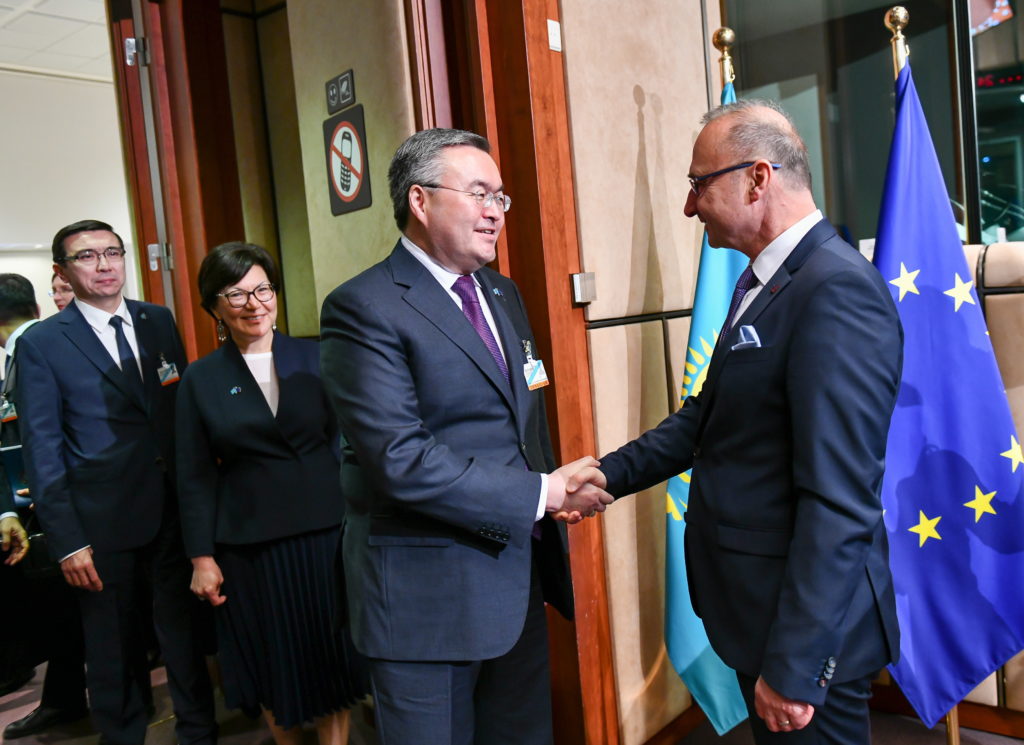 Earlier on the same day, the council adopted the conclusion of the EU-Kazakhstan Enhanced Partnership and Cooperation Agreement (EPCA) signed in 2015. The new agreement that has also been ratified by all member states and the European Parliament will enter into force March 1. Kazakhstan was the first country in Central Asia to sign the EPCA in 2015.

“The new ECPA, (…), opens the way to both a deepening and expansion of many ties between us at an important moment in Kazakhstan’s economic, social and political development. It is why it is an exciting time to be making my first visit to Brussels as foreign minister this week. I am determined to do all I can to build on the already strong partnership between Kazakhstan and the EU and ensure new opportunities for increased cooperation are taken,” wrote Minister Tileuberdi in an op-ed published on Euractiv ahead of the visit.

Delegations to the council meeting also discussed political, trade and economic cooperation and implementation of the new EU strategy and Europe-Asia interconnectedness.

Council representatives also said they are ready to work with Kazakhstan to apply the EPCA in 29 areas of cooperation, such as international and regional security, trade, investment, infrastructure development, as well as innovation, culture, sports and tourism.

Other priority areas of the agreement were energy, transport, the environment, education and science, according to a press release by the Ministry of Foreign Affairs of Kazakhstan.

Trade with EU countries accounts for 50 percent of Kazakhstan’s foreign trade while the EU is also the largest investor in the Kazakh economy.

Foreign direct investment from the EU to Kazakhstan in the first six months of 2019 reached $5.4 billion.

The Cooperation Council meeting was Chaired by Minister for Foreign Affairs of Croatia Gordan Grlić Radman and Minister Tileuberdi.

On the sidelines of the Cooperation Council meeting, Minister Tileuberdi met with High Representative of the Union for Foreign Affairs and Security Policy and Vice-President of the European Commission Josep Borrell as well as members of the European Parliament, including members of the Kazakhstan-EU Friendship Group and the Delegation of the European Parliament for Central Asia and Mongolia to discuss regional development in Central Asia and political reforms that have had a positive impact on democratic changes in society.

The European Parliament members hailed the decision of Kazakh President Kassym-Jomart Tokayev to  accede to the Second Optional Protocol of the International Covenant on Civil and Political Rights, aimed at abolishing the death penalty in the country, as well as initiatives on peaceful assemblies, decriminalising defamation and lowering the threshold for creating political parties.

Tokayev is scheduled to visit Brussels in February to discuss relations between Kazakhstan and the EU.