By Nazira Kozhanova in Sports on 17 December 2019 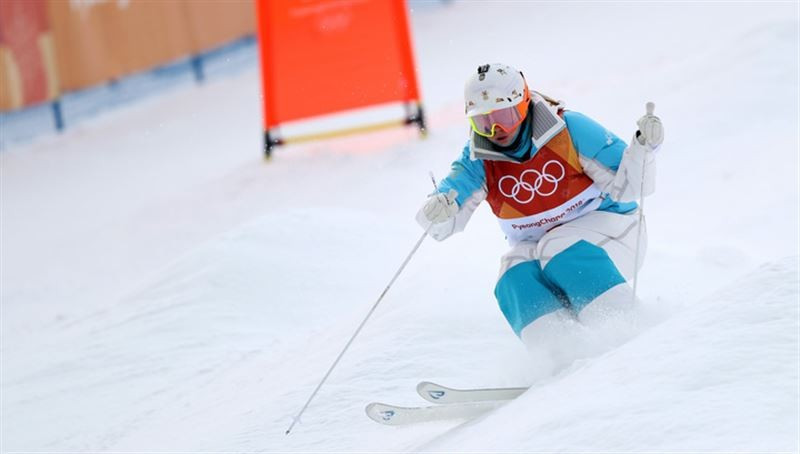 Galysheva scored 79.8 points and won the silver medal of the second stage of the World Cup. Perrin Laffon with 81.4 points won gold. Justine Dufour-Lapoint from the Canadian team finished third.

Among male Kazakh athletes, Dmitry Reiherd finished at sixth place. The winner of the men’s stage was Japanese athlete Ikuma Hiroshima with 86.9 points. In second place was Canadian athlete Michael Kingsbury with 86.3 point, while the bronze medal of the stage went to Frenchman Benjamin Cava with 83.3 points.

Earlier in November, Galysheva and her coach Yelena Kruglykhina shared with Zakon.kz the secret of Galysheva’s front flip big grab (FG) jump that she performs off the second springboard.

“The difficulty of the jump lies in the fact that at full speed, the athlete needs to clearly hit the springboard, at the right angle of attack, and then, after performing the FG, land almost blindly, continuing to go to the finish line,” Kruglykhina told Zakon.kz. Kruglykhina also said that by performing this jump the team wanted to showcase to the world the Kazakh school of freestyle skiing.

Galysheva said she learnt this jump from the first try, albeit at first she had some doubts.

“First we made this jump in the 2016/17 season. At first, I resisted, and then I went into the hall and said ‘Let me try,’ and I did it the first time. It seemed to be born with me. Then we arrived at the gathering in the Finnish Hand and made it in the snow. Canadian athletes trained with us there and were delighted. They try to repeat, but so far they don’t really have such a jump.”