By Aidana Yergaliyeva in Nation on 27 December 2019

NUR-SULTAN – Twelve people died after Bek Air flight No. Z2100 from Almaty to the capital crashed during take-off, 7:22 a.m., Dec. 27, reported the Civil Aviation Committee press service. The Fokker 100 aircraft collided with a two-story apartment building in the Almaty Region, Talgar micro district, between the Guldal and Almerek settlements. 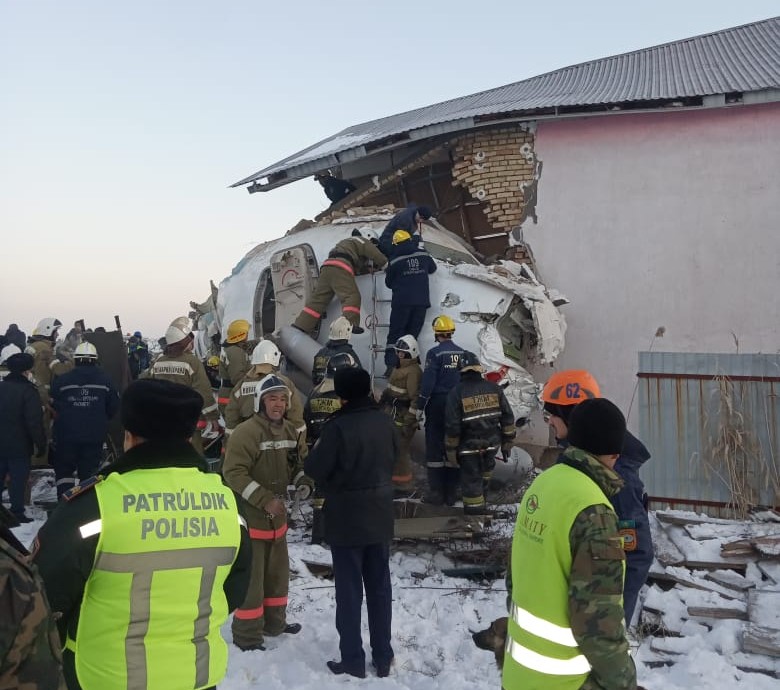 Photo credit: The Committee for Emergency Situations of the Ministry of Internal Affairs press service.

According to preliminary data, eight people died at the scene, two during transport and two at the hospital. Almaty city hospitals received 53 people, including nine children. No one was in the building at the time of the crash.

The aircraft had 95 passengers and five crew members. Fifty-one ambulance crews arrived to assist with the rescue operation.

President Kassym-Jomart Tokayev expressed his condolences to the families of the victims and named Dec. 28 as a national day of mourning. He stressed “all guilty in this air plane crush will be punished according to the law.”

The government established a commission led by Prime Minister Askar Mamin which flew to Almaty. The Ministry of Internal Affairs started a pre-trial investigation into the crash, reported its press service.

“According to the preliminary version, the plane crashed either because of the pilot’s error or it is a technical error. This will be established by a special commission with the participation of specialists from the International Aviation Committee,” said Deputy Prime Minister Roman Sklyar at a briefing at the airport, reported inform.kz.

The government will distribute compensations  in the amount of 4 million tenge (US$10,498.98) to the families of the victims , reported primeminister.kz.

“The government will determine the procedure for compensation. No one will be left without attention,” he added.

“Almaty residents donated blood for the victims of today’s plane crash. I am proud!” said Kazakh blogger Alexander Tsoi on his Twitter page.

Omsk residents brought flowers to the Kazakh consulate in Russia.

The Kazakh Aviation Administration has suspended Bek Air operations and all Fokker 100 flights in the country until the circumstances of the incident are identified.

Bek Air expressed its condolences for the tragedy and asked people not to respond to anonymous messages that might be fraudulent.