By Nazira Kozhanova in International on 10 December 2019 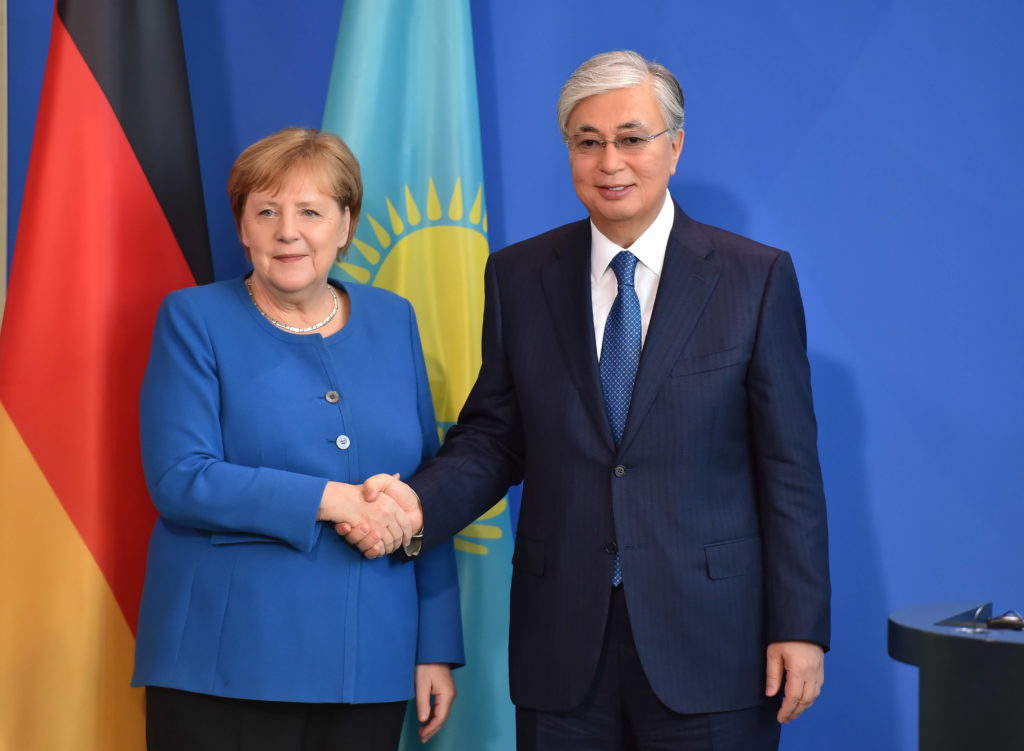 “The purpose of my visit is to give an additional impetus, primarily to economic cooperation and political interaction. It so happened that Germany, being the fourth largest world economy, occupies the 12th place in our economy in terms of investment presence. I expressed the hope that in the very near future the situation will be corrected in favour of Germany,” Tokayev told a press conference following his talks with Merkel.

Tokayev also addressed the session organised by the Berlin Eurasian Club, where he expressed Kazakhstan’s commitment to providing German investors with special conditions, such as a tax exemption regime in special economic zones and infrastructural conditions.

“We are ready to give you the maximum of existing preferences, including a tax exemption regime in special economic zones, provision of infrastructure, etc. I set the task for Kazakh Invest and the Kazakh Direct Investment Fund to open special offices that will cooperate with German investors,” said Tokayev, according to akorda.kz.

Tokayev noted the measures are unprecedented for Kazakhstan.

“These measures are new to our system. Previously, we did not provide such conditions to any other country. I sincerely hope that with the right approach and attitude, the Government and investors will make them truly effective,” he said.

Germany sees Central Asia as a key part of the world economy, Merkel said during a joint press conference with Tokayev after their talks on Dec. 5.

“China and Russia are great neighbours of Kazakhstan. We know the One Belt, One Road initiative. Therefore, we have every reason as Europeans, as Germans, to perceive you in Central Asia as a key participant in economic processes, and also to actively participate in the development of this region ourselves,” she noted.

During their talks, Tokayev and Merkel focused on developing economic cooperation, as well as partnerships in science and cultural work.

“Today’s talks with Chancellor Angela Merkel and President Frank-Walter Steinmeier were held at a high level. I am sure they will give a new impetus to the development of bilateral cooperation,” Tokayev said of their exchange.

During the Berlin Eurasia Club event, Tokayev noted the importance of Kazakh-German cooperation in Kazakh-European relations.

“We pay great attention to what is happening in Europe. We are engaged in a constant constructive dialogue with European leaders. Kazakhstan will continue to support new EU approaches towards the Central Asian region. It is obvious that in our interaction with Europe, for many reasons, a special place is occupied by economic, historical, cultural relations with Germany,” said Tokayev.

Among the perks of working with Kazakhstan, Tokayev highlighted the benefits of Kazakhstan’s integration with its Central Asian neighbours that allows German companies easy access to Central Asian markets.

“Our close integration with our neighbours provides convenient access to neighbouring markets. More than 500 million people live today in the immediate vicinity of our borders. Within the framework of the Eurasian Economic Union, we want to benefit from four freedoms – the movement of goods, services, capital and labour. We will continue to work closely with our closest neighbours in Central Asia. Therefore, German companies that are already present in Kazakhstan will have the opportunity to enter new markets for them.”

Tokayev expressed his hopes for the cooperation in information technologies, which is a sector Kazakhstan is developing.

“We have adopted a special state programme, “Digital Kazakhstan”. The Fraunhofer Institute from Germany participated in the development of this strategic programme. In order to support start-ups from all over our region, we organised the Astana Hub and the IT University. We hope that in three years we will have a pool of talents in the field of information technology. In general, we are ready for cooperation in the area of digitisation both at the level of government structures and at the level of individual companies,” said Tokayev.

During his visit to Germany, Tokayev also held a business dinner with German business executives, as a stated aim of his trip was to diversify Kazakhstan’s portfolio of investors.

“As the President of Kazakhstan, I will do everything in my power to ensure that business and investments from Germany come to our country, feel safe and successfully develop. We are ready to provide special conditions for German business people,” he told the group.

Tokayev emphasised Kazakhstan’s location as an asset for companies interested in transporting goods from China to Europe.

“We have very good relations with China, Russia and the countries of Central Asia,” he stressed. “We are an important transport hub between east and west. Over 70 percent of all transcontinental routes pass through Kazakhstan. The international Western Europe-Western China transit corridor makes it possible to reduce the time of transportation of goods. This year, a record speed was reached for the transportation of goods from the Chinese city of Xi’an to Germany; the transportation time was only 10 days.”

Leading German concerns including Volkswagen, Mann, Siemens, Knauf, Bayer and Metro are already actively working in Kazakhstan, the president noted, calling for more German businesses to join in the implementation of projects in agriculture, high technology and digitisation, as well as take part in the work of the Astana International Financial Centre.

“It was a great honour for us to speak with you. We are confident that your visit will fruitfully affect not only our political contacts, but also our economic ties,” said head of the Wilo company and chair of the Eastern Committee of the German Economy, Oliver Hermes, at the Berlin Eurasian Club event on Dec. 6. “I want to assure you that German business as a whole is a reliable partner of Kazakhstan. I believe that we have good opportunities for future cooperation and the growth of German investments in the economy of Kazakhstan.”

During Tokayev’s visit to Germany, representatives of the Kazakh Development Bank signed cooperation agreements with such German banks as Deutsche Bank, Commerzbank, KfW IPEX-Bank. A memorandum of understanding was also signed with German insurance company Euler Hermes Aktiengesellschaft while a number of commercial agreements were signed as well.