By Yelena Levkovich in Business on 7 December 2019 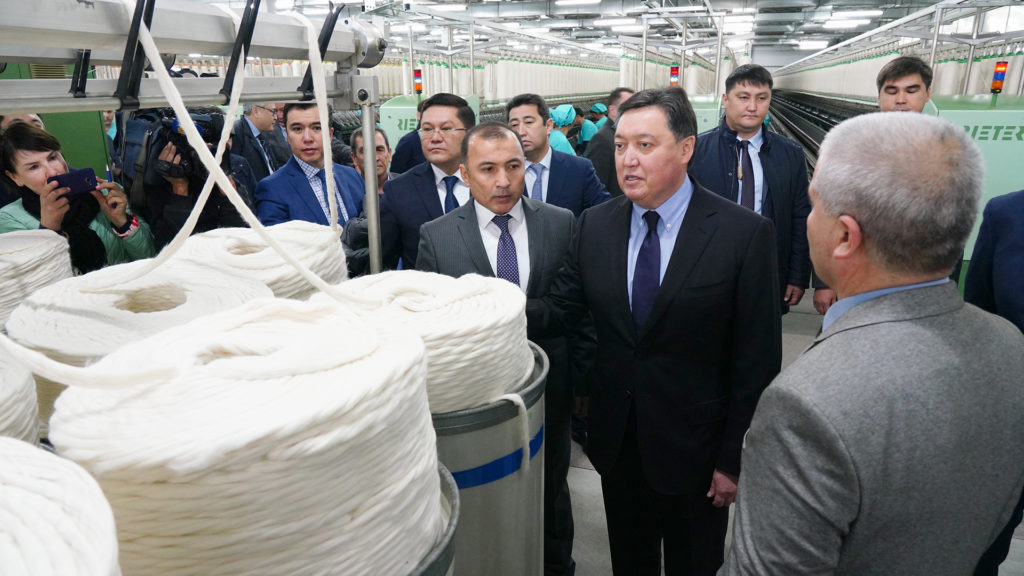 His visit to the country’s third largest city and adjacent region offered the opportunity to review the progress of the State Programme of Accelerated Industrial and Innovative Development and the Economy of Simple Things project initiated by First President Nursultan Nazarbayev and implemented by President Kassym-Jomart Tokayev for the area’s social and economic growth.

In Shymkent, Mamin participated in the opening of the Alliance spinning mill. The company, a collaborative project between Kazakhstan Investment Fund and Uzbekistan’s Alliance Textile, was launched under agreements between the two governments on joint textile cluster development signed during last summer’s 18th session of the joint intergovernmental commission. A building which was boarded up for a long time was renovated and all facilities installed. Both sides worked diligently to complete the construction on time and finish the repairs.

“Kazakhstan’s First President Nursultan Nazarbayev has set a goal on the Economy of Simple Things development and light industry plays a special role in it. Now, we can see the first results,” said Mamin at the ceremony.

He noted the factory launch will provide the impetus for further growth of the Kazakh textile cluster, adding Tokayev has repeatedly spoken about the importance of foreign investments in the nation’s non-commodity sector.

The 120-employee enterprise plans to raise its annual capacity up to 6,000 tonnes. Investments by Uzbek partners will reach approximately 4.6 billion tenge (US$120 million).

Two more factories will be launched under the road map as part of the Shymkent textile cluster rehabilitation. The operation, according to experts, would double the volume growth of cotton recycled in Kazakhstan and generate 800 additional jobs.

The facility’s estimated annual capacity will be approximately 4,500 tonnes of products supplied both to the internal and international markets. The owners indicated they will only use domestic raw materials.

Mamin also visited soon-to-be-opened facilities in Turkestan city, including the Turkestan International Airport construction site and public road leading to the future air harbour. The airport will be built with Turkish investor participation, said the then Kazakh Invest Board Chairperson Saparbek Tuyakbayev in May.