By Aidana Yergaliyeva in Astana on 15 December 2019

NUR-SULTAN – The Ambassadors Spouses Astana (ASA) Association transferred funds raised through the annual Diplomatic Christmas Charity Bazaar to 32 social projects and individuals during a Dec. 12 ceremony in Nur-Sultan. The association raised more than 36 million tenge (US$93,713) at this year’s bazaar, held Dec. 1. 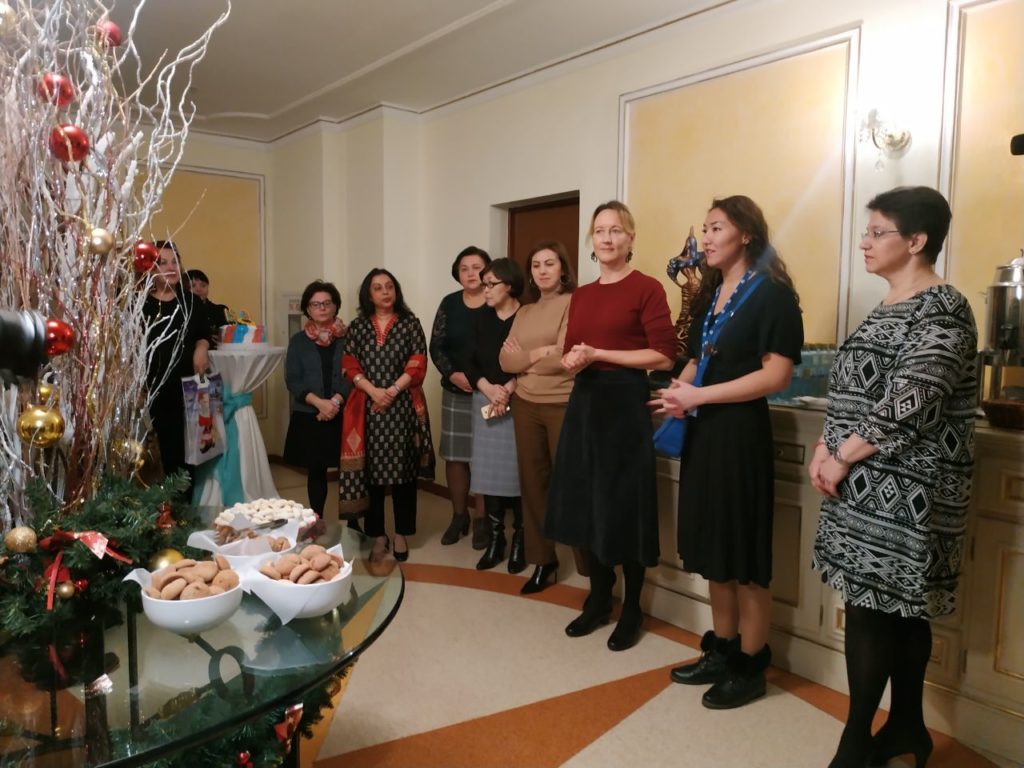 The annual charity bazaar, now in its 12th year, saw stalls from 53 embassies, as well as organisations like the United Nations and the European Union. Each sold their national dishes, sweets and products. The Grand Raffle distributed gifts from 87 sponsors, with prizes as big as a Lada Granta car, air tickets, spa certificates and more.

The money raised is distributed to social projects and individuals in need each year. In 2018, the bazaar raised nearly 38 million tenge (US$97,692), which helped the association complete 50 projects. The works were based in small settlements, villages, towns and regional cities tackling a range of problems.

This year’s projects also cover various parts of Kazakhstan and help many kinds of people and organisations.

“We have schools, orphanages. We have individual people, organisations. We help poor people. I would say it is quite a nice, wide range of different kinds of projects. What I am happy about is it is all over Kazakhstan. Different cities and villages,” said Charity Committee Chair Maria Kivikoski.

The committee receives many applications each year, but can only help as many as fundraising allows.

“It is a very challenging task to do because we get so many applications. We are doing an important job,” Kivikoski said, explaining that the organisation tries to find new projects every year. “So, if some organisations receive funds many years in a row, we might give them a little break.”

Representatives of the social organisations, schools and individuals who received this year’s funding lined up to express their gratitude to the bazaar organisers with a cake, thank you notes, books and handmade crafts from children.

Among individual recipients this year were Nurgali Alisher, who has been struggling with graft-versus-host disease (GVHD), a severe adverse response to a bone marrow transplant, since 2015. Alisher needs costly treatments for at least another six months.

“When we applied, our application was considered immediately. For us, this is a big support,” said Alisher’s mother. “Besides participation in the Christmas bazaar, they gave us a stall under Kyrgyz flags to sell baked products. The Tap-Tatti bakery provided us these baked products. [We sold] all kinds of New Year crafts. In this charity event we collected 102,000 tenge [US$265.50]. For us, this is a very big help. Also, they unexpectedly called us and told that they will allocate financial help. We are happy that there are many kind people.”

People came to the ceremony from Shymkent, Oskemen, Karaganda and many other places. Yelena Zhdanova arrived from Temirtau to thank the ASA on behalf of the Moi Dom (My House) Public Union, which helps develop social support for the local population.

“We have a crisis centre. We work with children who have been abused and found themselves in a difficult life situation. For the last three years, no one has been financing our centre [but ASA]. The building was built with funds from the Japanese embassy in Kazakhstan. We have no right to reject anyone. Our crisis centre is always filled with people. Right now, the help of the association of the spouses of ambassadors is saving us. Exactly thanks to this association we purchased gym equipment, sewing machines, groceries and medicine. For several years the association has supported us… We are very grateful!” Zhdanova said.