By Staff Report  in International on 4 December 2019

NUR-SULTAN – The third consolidated unit of Kazakh peacekeeping forces started its operations Nov. 27 as part in the United Nations Interim Forces in Lebanon, reported the Ministry of Defence press service. The company consists of 120 military personnel from regional commands and the country’s Air Assault Forces. 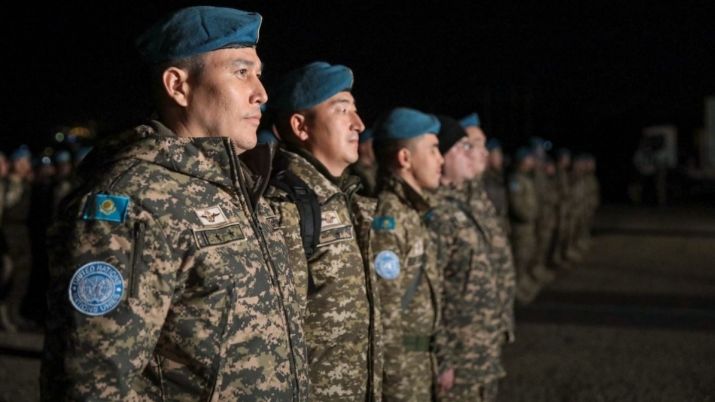 “The first and second rotation performed their service perfectly. You participated in a special course in India. It is a great honour for me to welcome you here. Since Kazakh military personnel began to perform tasks as part of the Indian battalion, we call them not Indbatt but IndKazBatt,” said Indian battalion commander Narayan Bati in his welcoming speech.

The Kazakh peacekeeping unit, together with the Indian battalion, will patrol 16 kilometres of the Lebanese-Israeli border, the Blue Line border demarcation between the countries.

“They daily control the situation and serve at checkpoints. They are responsible for guarding and strengthening military bases and patrolling operations. Their task is to establish friendly relations with representatives of the peacekeeping contingent of other countries and the local population,” said a ministry spokesperson.

The third unit will remain in Lebanon until May.

Prior to selection, military personnel undergo psychological tests, medical examinations and tests to determine their knowledge of the English language. After being chosen, they take part in three or six-month theoretical and practical training conducted by Partnership for Peace Centre trainers, mine clearance centre specialists and peacekeeping instructors.

Kazakhstan is participating in the UN mission in Lebanon as part of the Indian battalion. Joint visits are expected according to the bilateral cooperation programme between the countries.

“Our military personnel visit New Delhi as part of a peacekeeping training course. At the final stage, a training group from India arrives in Kazakhstan to conduct a two-week training course. Then, the special group determines the readiness of the military personnel to participate in the mission. Personnel undergo mandatory vaccination as prescribed by the World Health Organisation,” reads the release.

The first 120-troop Kazakh peacekeeping company participated in the UN mission in Lebanon from October 2018-May 2019. A second 120-member unit remained from May-November.

The United Nations Interim Force in Lebanon is the UN peacekeeping force deployed in southern Lebanon on the border with Israel with a six-month extension in accordance with UN Security Council Resolution No. 425 of March 19, 1978.