By Aidana Yergaliyeva in Business on 6 December 2019 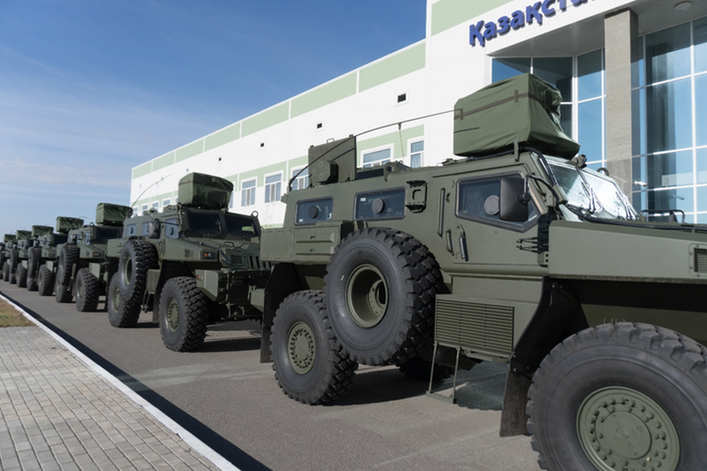 KPE is a joint venture of the Paramount Group, a global aerospace and technology company based in South Africa. In addition to the Arlan 4×4, the company produces advanced AWVs such as the Nomad 4×4, Barys 6×6 and Barys 8×8.

“The delivery of yet another significant batch of armoured vehicles to the customer is testament to the commitment, hard work and skills set of the KPE team,” said Paramount Group Chair Ivor Ichikowitz.

Arlan AWVs are essentially Paramount’s iconic Marauder vehicles, but enhanced and adapted to Kazakhstan’s severe winter conditions. They operate in temperatures as low as –50 degrees Celsius and summer temperatures up to +50 degrees, with a temperature control system ensuring safety and comfort for military personnel. The range allows the armed forces to complete extensive mission requirements such as long-range border patrol or quick reaction force operations in extreme environments.

“The strong growth of Kazakhstan Paramount Engineering, driven through indigenous manufacturing solutions, has been an important success story. The portable manufacturing model that we have pioneered around the world has enhanced indigenous capability, high-skills training and local expertise,” he added.

The Arlan has a modular design and double-skin monocoque. With its V-shaped hull, the vehicle can withstand the debris, dissipate energy of explosions and offer increased protection against mine blasts.

The vehicle is also equipped with radiation, chemical and biological protection (RCB) allowing  it to survive radiation dust spread, gas and/or biological attacks. It also has ventilation equipment able to purify the air inside the cabin for several hours.

In addition to the advanced protection and ability to handle up to a 4,500-kilogramme payload, the Arlan is also versatile, capable of reaching up to 120 kilometres per hour and travel a distance of 700 kilometres. The vehicle can ford at 1.2 metres and is able to climb 60-percent grades and 35-percent side slopes.

“We look forward to playing a long-term role with our partners in Kazakhstan in enhancing local capabilities and fuelling next-generation employment opportunities and economic growth in the process,” said Ichikowitz.

KPE is one of the leading defence companies in Kazakhstan and the Commonwealth of Independent States (CIS) region. The company began production of Arlan AWVs in November 2015 and presented the vehicle at the KADEX 2016 Defence Expo. Its armoured vehicle factory is one of the largest and most modern plants of its type in the region.

Paramount Group was founded in 1994.