in International on 3 December 2019 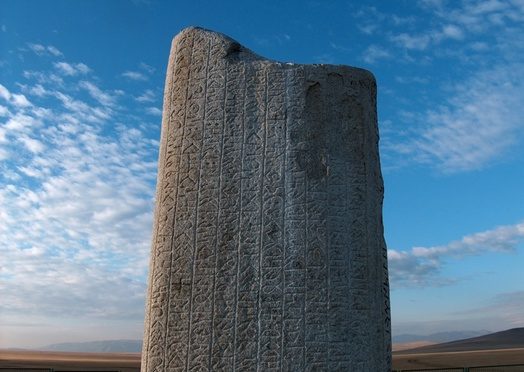 The date is linked to Danish linguist, polyglot and historian Wilhelm Thomsen’s discovery of the way to decipher ancient Turkic writing. In interpreting the words “Turk” and “Tengri” in the runic texts of the Orkhon River banks, he opened a new chapter in Turkology history.

Thomsen presented his breakthrough to the Danish Royal Academy of Sciences on Nov. 25, 1893. His work allowed foreign Turkologists to translate the manuscripts and years later Azerbaijani, Kazakh and Uzbek scientists have joined them to further explore the ancient writing.

“It was a great scientific discovery in the world of linguistics. The Russian explorer Murad Adzhi named that date the day of the second birth of Turks. The ancient manuscripts have witnessed the high level of language culture and statehood of the Kazakh people’s distant ancestors. The ancient Turkic runic writing reflects the common ideology and presents the concept of centralised polity as the surety of liberty and independence,” said the Rukhani Janghyru (Modernisation of Kazakhstan’s Identity) Kazakh Institute of Social Development press service.

The location choice for the event was not accidental – Kazakhstan is “a sacred Shanyrak,” the centre of the Turkic world, said Uly Budun Public Association Chair and art historian Meruert Kurmangaliyeva.

“We set a goal to unite Turkic peoples, having links with many Turkologists interested in that. What can really bring together all the representatives of the Turkic world? First, we must understand that the writing is the foundation of statehood. We want all the Turkic states to support us,” she said, adding Azerbaijan and Turkey also began celebrating Turkic Writing Day this year.

As specialists have noted, ancient Turkic runic inscriptions can be found in large areas of Kazakhstan, including the Ili, Irtysh, Talas, Syr Darya and Zhaiyk river valleys. Experts have discovered the scripts written on ceramics, carved on bronze mirrors found in the East Kazakhstan Region and inscribed on other artifacts.

The key event of the day was a flash mob, with pictures of Turks from different countries writing a few words from Kultegin’s (a great warlord) proclamation. In the future, the photos will serve as a unified appeal to all Turkic people.