By Nazira Kozhanova in Sports on 3 December 2019

NUR-SULTAN – Astana Football Club beat the U.K.’s Manchester United 2-1 Nov. 28 in a Europa League fifth group match in the capital. The win was Astana’s first in the Europa League. 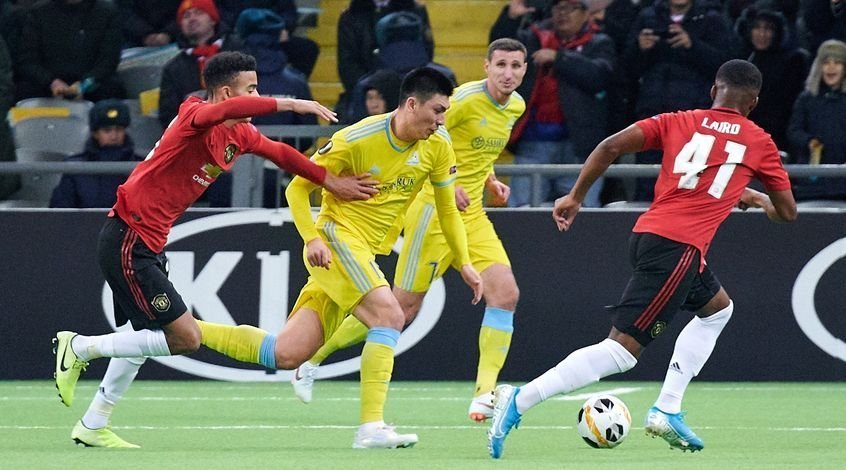 “People create an atmosphere, so we must win. Thank God that we were able to repay the debt. I want to say thanks to them for this,” said Astana head coach Roman Grigorchuk after the match, according to vesti.kz.

“In the first half, we had flaws. I told the players that the segment when we were deeply defending…  We scored a goal after the moment when we illogically played a corner. They were great that they were not upset but began to play better. Today, I can only say good things about my team… A conversation took place during the break, where we recalled what we talked about before and explained that we could win this match,” he added.

Manchester United Head Coach Ole Gunnar Solskjaer admitted the team’s performance declined throughout the match, noting many players were new to the game and the match was the debut for three members.

“I thought the three young boys who started the game were excellent and the only part I wasn’t happy with was the ten minutes when they scored their two goals. You could tell the pressure was coming. These boys need men’s football; they got a taste of it tonight,” he said, according to telegraph.co.uk.

Manchester United’s lack of experience was observed by those in the stands.

“When United still had strengths, they attacked in the first half of the match. But later the lack of experience showed itself and our players showed them,” said Astana fan Baku after the game.