“Cinderella” is the second fairy tale in the theatre’s repertoire, following “The Nutcracker,” and tickets sold out a month before the programme. The ballet will perform the work again Jan. 7-8, then tour to Almaty for Feb. 21-23 performances. Tickets may be purchased on the theatre’s website, https://astanaballet.com.

“Starting from the theatre foyer, all the decorations made the atmosphere magical; you could feel it from the first sight. The ballet itself was very impressive; all the characters were represented clearly and their costumes were amazing!” said audience member Leila Mukhtar.

“I particularly loved the character of Cinderella’s stepmother, the artist and, most probably, the director of the production demonstrated her cunning and flirtatious nature so beautifully and hilariously! Together with the fun part, there was also drama, beautiful dancing and amazing Cinderella with the Prince! What I liked the most was how impressive and abundant were the decorations and special visual effects used in the production. All of them made me feel like I’m watching a Disney movie come to life! I can’t describe it in words; you have to experience all this by yourself!” she continued.

“Cinderella,” staged in the country as a ballet for the first time, is the work of Russian choreographer Nadezhda Kalinina.

“We are creating this show from scratch. Choreography, sets, costumes, video projection –everything is created, made and sewn specifically for Astana Ballet. People want fairy tales and our main task is to create a spectacular family performance with a modern dance style in which there will be many bright characters and, of course, the humour. The genre of comedy in ballet is rare, because being hooligans on stage and making people laugh is much more complicated and requires a certain liberation,” she said.

Although she has previously worked with the ballet, the presentation is her first large-scale production. She staged miniatures and assisted with “Astana,” the first national musical.

“I felt the responsibility when I was invited to stage ‘Cinderella,’ with the most complicated and amazing music by Sergei Prokofiev. The ballet here is in two acts instead of Prokofiev’s three. It was hard to throw out some pieces of genius music. The ballet takes one and a half hours; the first act is 35 minutes and the second is 55 minutes. Our aim was to create the fairy tale of a kind, poor girl who madly wanted to go to the ball. It was all possible because of our cooperation with and fantasy of Sergei Novikov, the production designer. The scale of decorations is huge; a huge number of people change the decorations during the show,” she added.

The ballet has two sets of soloists – the sisters and the stepmother, and Cinderella and the prince.

“The work was hard; the choreography was hard. One of the complications is that Cinderella almost never leaves the stage. Even during the breaks, the dancers, not only Cinderella, do not relax; they change. Some even change on stage. In addition, we do jumps and rotations and we have to show this emotionally, to show the story, to interest the viewer, make him or her immerse into the fairy tale,” said one of the Cinderella ballerinas Diana Ten.

“Starting with the first rehearsal, my task was to help, to overlook if someone missed something or did not do something. We will try to show all the magic to the audience. The artists started at 10 a.m. and the work could go until three or five in the morning,” added Prince dancer Kazbek Akhmediyarov, who is also assisting in the staging process. 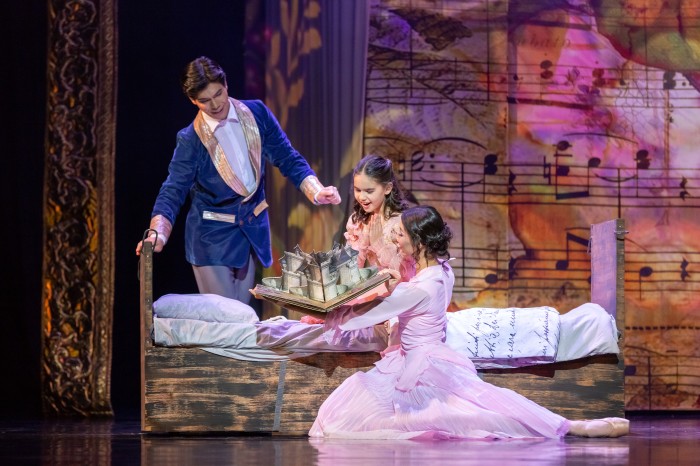 The orchestra is under the direction of Arman Urazgaliyev.

“A live orchestra in performances gives a different feeling, impression. The musicians’ energy is transmitted to the stage. The dancers charge on this energy and thus perform differently, more meaningfully. Performing Prokofiev’s music is incredibly hard because of his style and sheet music. Usually, Prokofiev’s pieces are the most difficult in any theatre repertoire. The musicians were able to work through it, though, but not without problems,” he said.

As set and costume designer, Novikov created the giant books in the background, the garden and costumes for the soloists, guests at the ball, butterflies and ravens and all the other touches. The book showing that it is all a fairy tale is also reflected in the smaller details, props and costumes.

“The idea is simple. There once was a girl who wrote in her diary. The diary grew to become a giant book full of fantasies,” he added.

“I hope that the fairy tale will leave the biggest impression on the audience and create the New Year atmosphere. It was a big project; we have been working on it for more than six months,” said theatre director Alexander Sovostianov.

Kalinina is impressed with the changes to the theatre.

“The theatre is remarkable. I was here in the beginning and the metamorphosis that has happened since 2012 – I am exhilarated. When I was here, there were only female dancers and the fact that it acquired male dancers gave big opportunities for productions. The building, the technical capabilities grew tenfold; I can only imagine what will happen in the future. With the pace that it is developing, I think in five years or so Astana Ballet will become a leading theatre,” she said.