By Zhanna Shayakhmetova in Nation on 4 November 2019

NUR-SULTAN – Kazakhstan has joined the Global United Nations programme on Supporting the Management of Violent Extremist Prisoners and the Prevention of Radicalisation to Violence in Prisons along with Tunisia and Uganda, the UN Office on Drugs and Crime (UNODC) in Kazakhstan reported recently. 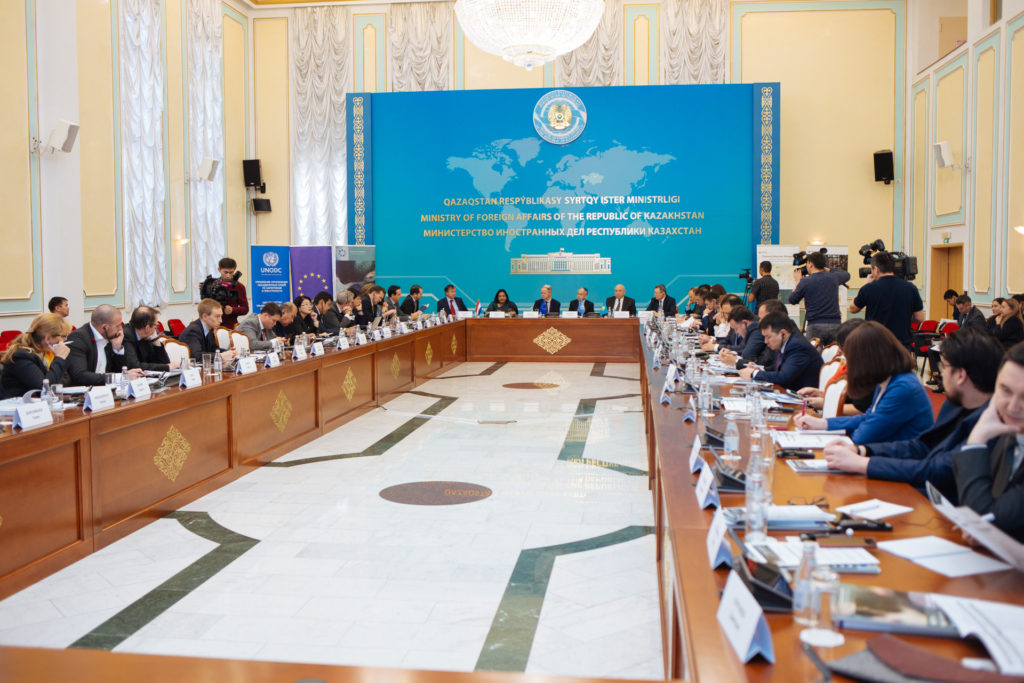 UNODC Resident Representative Ashita Mittal said at the Oct. 30 meeting on Development of Criminal Policy Framework on Countering Violent Extremism and Terrorism in Kazakhstan in Nur-Sultan that the UNODC stands ready to provide technical support in the screening and prosecution, rehabilitation and reintegration of individuals suspected or convicted of committing terrorist acts, including foreign terrorist fighters and persons associated with terrorist groups.

More than 50 representatives of state bodies, civil society organisations, international partners and criminal justice practitioners from Central Asia, Germany and Spain took part in the event. The participants discussed existing practice and challenges for the development of prosecution, rehabilitation and reintegration strategies for prisoners in Kazakhstan.

“The European Union Strategy for Combating Radicalisation and Recruitment to Terrorism calls for a balanced approach between security-related measures and efforts to tackle those factors that may create an environment conducive to radicalisation and recruitment to terrorism. Dealing with terrorists and violent extremist offenders and preventing radicalisation in prisons remain significant challenges across the EU,” said Head of EU Mission to Kazakhstan Ambassador Sven-Olov Carlsson.

The approaches provided by the UN member states include summary trials of individuals associated with terrorist groups, placing persons suspected of association with terrorist groups in protracted administrative detention, developing rehabilitation programmes focused on de-radicalisation and allowing persons who voluntarily disengage from terrorist groups to return to their communities without having been subjected to the criminal justice process.

Earlier this year, the Kazakh Ministry of Internal Affairs and UNODC signed the country work plan for the implementation of the global initiative in 2019-2021.

The plan was developed in partnership with key state counterparts, civil society and implementing partners and includes four components – safety and security, prisoners’ risks and needs assessment, prison-based rehabilitation programmes as well as post release support and alternatives to imprisonment in suitable cases.

The academy and UNODC will develop thematic plans for three areas for theologians, psychologists of penal correction systems and staff of operational services.

The delegation of the EU, the UN and the Netherlands visited two pilot male and female prison facilities in the Karaganda Region Nov. 1.

Akim (Governor) of the Karaganda region Zhenis Kassymbek said the local authorities would provide the necessary assistance in the implementation of the joint initiative.

“The Karaganda region is one of the largest regions of Kazakhstan, accounting for 17 percent of the entire territory of Kazakhstan where most of the country’s prisons are historically located. Social reintegration of prisoners after release is one of the priority areas and I would like to assure that the administration of the Karaganda region will provide assistance and support in the implementation of our joint UNODC project,” said Kassymbek.

The prison rehabilitation and social adaptation programmes were discussed at the expert meeting. It is scheduled that a field mission will be organised to evaluate the implementation of the programme.

“Kazakhstan is one of the three beneficiary countries included in the joint initiative. After consultation with the authorities, two pilot institutions were selected in the Karaganda region. We visited the prison facilities and met with the staff and the convicts. Our goal is to develop an action plan. The events will be focused on safety issues, risk and needs assessment, rehabilitation programmes and social adaptation after release,” said UNODC programme manager Vera Tkachenko.