By Nazira Kozhanova in International on 29 November 2019 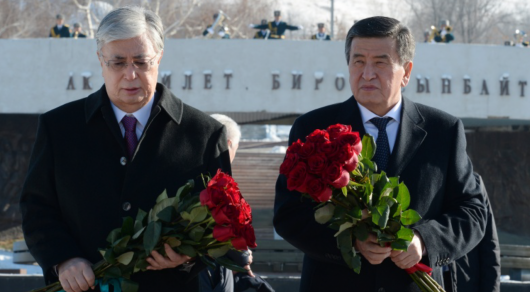 “We strive to find and develop new areas of joint work that are consistent with the spirit and nature of Kazakhstan-Kyrgyzstan relations,” Tokayev said after speaking with Zheenbekov, according to 24.kg.

Regarding the content of the negotiations, Zheenbekov noted that the development of cultural cooperation and interactions within the Eurasian Economic Union were at the heart of the discussion.

“Particular attention was paid to cultural cooperation between our two fraternal countries, having a common history, language, religion and traditions. We agreed that it is necessary to cooperate more actively in this area. We also discussed issues of interaction within the framework of the Eurasian Economic Union. During the talks, an exchange of views took place on pressing regional and international issues,” he said.

In particular, he proposed in the near future to organise reciprocal Days of Culture, which were held more than six years ago.

Tokayev described Kazakhstan and Kyrgyzstan as allies in good harmony.

“Kyrgyzstan is a good neighbour, a fraternal state and an ally for Kazakhstan. We have a common vision, similar views on the development of the situation on many topical issues on the international agenda,” said Tokayev, according to 24.kg.

He also noted that Kazakhstan has signed more agreements and treaties with Kyrgyzstan than with any other country. “A solid juridical base has been formed between our countries, numbering about 180 treaties and agreements. There are other important institutions where we constructively discuss and find solutions to all issues of mutual interest. Kazakhstan does not have such a comprehensive institutionalisation of bilateral relations with any other state.”

He drew the attention of journalists to bilateral documents signed at the end of the talks, highlighting the Comprehensive Cooperation Programme that should give a significant impetus to strengthening the partnership between the two states.

Zheenbekov expressed satisfaction with the negotiations.

“The Kyrgyz side is pleased with the results of the negotiations, and I would like to note the fruitful continuation of our cooperation,” he said, according to 24.kg.

Tokayev said during the talks a major emphasis was made on trade and economic relations of two countries, as well as investment links.

“Bilateral trade from 2015 to 2018 increased by 30 percents and amounted to about $900 millions. As a result, today our country is one of the leading trade partners of Kyrgyzstan, firmly occupying the third position after Russia and China. In turn, Kyrgyzstan is Kazakhstan’s second trading partner among the countries of Central Asia,” said Tokayev, according to akorda.kz.

Tokayev said one of the goals of the cooperation is to increase the trade turnover up to $1 billion. The two leaders discussed the possibility of launching a networking space where the entrepreneurs of two countries could make connections.

“One of the possible options could be the introduction of the practice of holding inter-regional forums of Kazakhstan and Kyrgyzstan. Governments have been entrusted with working out this proposal,” said Tokayev.

To support export and import operations, Tokayev offered to create a logistics centre.

“To support and stimulate export-import operations, Kazakhstan proposed creating a logistics centre for the design and processing of goods. The implementation of the project will greatly facilitate administrative procedures and the movement of goods across our countries,” he said.

Another central topic was the water management in the region.

The Kyrgyz president also noted that the volume of trade between the neighbouring nations grew in 2019.

“We noted with satisfaction the increase in the volume of mutual trade between our countries. Compared to last year, the indicator grew by 10.5 percent. The number of Kyrgyz-Kazakh joint ventures has grown to 1,900. This result can serve as the basis for new successes in the economy.”

Before the negotiations, Zheenbekov met Tokayev and the Kazakh delegation at the Manas-2 airport in Bishkek. The two presidents then visited the late Kyrgyz writer Chingiz Aitmatov museum house and the Ata-Beyit Kyrgyz ethno-memorial complex, where they put flowers on Aitmatov’s grave.