By Aidana Yergaliyeva in Astana on 26 November 2019

NUR-SULTAN – The Ambassadors Spouses Astana (ASA) association presented baskets of products and goods donated by embassies and sponsors for the 12th Christmas Charity Bazaar at the Basket Day event in Nur-Sultan Nov. 25. 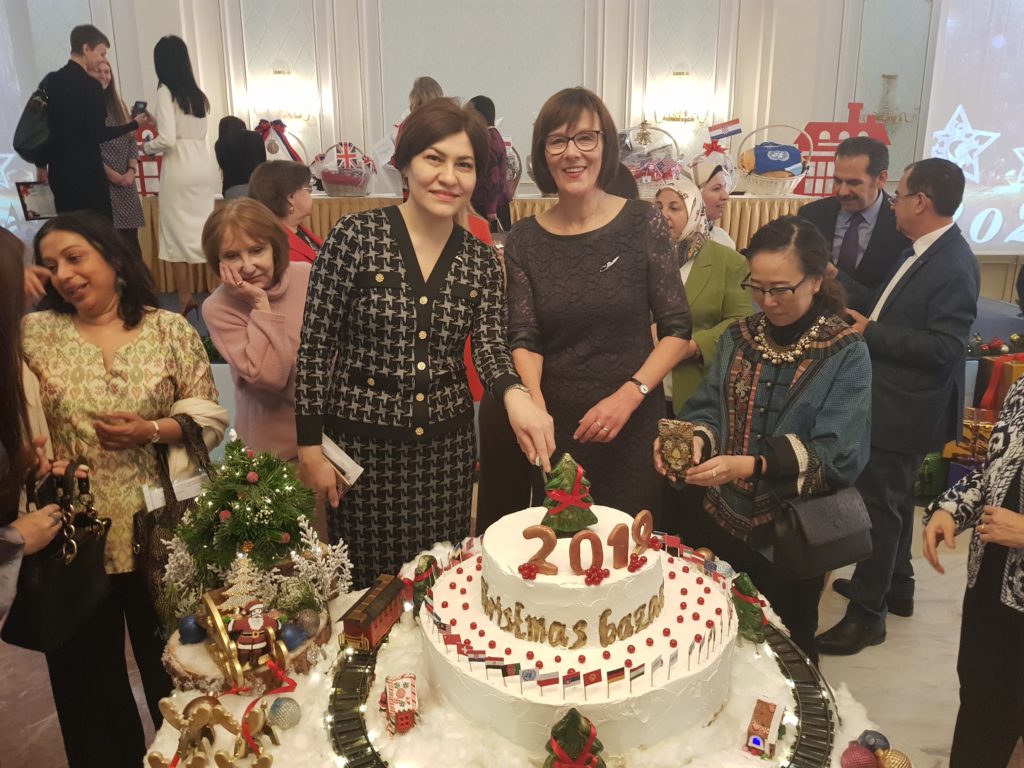 Fifty-three embassies have donated baskets for the bazaar, which will be held Dec. 1 from 11 a.m. to 6 p.m. in the Radisson Hotel Astana, which has served as the general sponsor of the event for 12 straight years now. The money from Charity Bazaar sales will go toward the charity fund.

“Today’s event is an opportunity for all the ambassadors and their wives to deliver their baskets going to the raffle. Every basket contains food products of the country that they represent. It is just an occasion for us to give a little extra to the raffle,” Patricia Gifford, wife of the British ambassador to Kazakhstan, said.

Visitors to the bazaar can sample the national food of 53 countries at once. Participating embassies can introduce visitors to their culture through their national products.

“This makes it unique – that you can get, for example, original Swiss cheese from Switzerland,” said ASA President Luzia Sebesta Schmid, wife of the Swiss ambassador.

The highlight of the bazaar is its Grand Raffle. Tickets that sell for 1,000 tenge ($2.60) can earn a lucky few prizes like a Lada Granta car, a ferry cruise, trips to Abu Dhabi, Istanbul, Riga and Sharja, as well as to one of the three destinations to choose from those serviced by Air Astana, a spa visit and other treats. Eighty-seven companies and organisations are sponsoring prizes at this year’s bazaar. The list of sponsors also includes The Astana Times and The ATOM Project.

The number of participants in the raffle grows every year. For the 12th Charity Bazaar, the ASA printed 10,000 tickets, Gifford said, noting that she’s seen a lot of interest in the event. “We seemed to have a good response,” she said.

In 2018, the bazaar raised nearly 38 million tenge (US$97,692). The association used the money raised there to complete 50 projects helping small settlements, villages, towns and other regional cities tackle a range of challenges, including building rehabilitation centres for children, buying equipment for schools and helping low-income families.

“Every year the sum gets bigger. [People] learn more and more about the bazaar,” said spouse of the Spanish ambassador Janna Bugaeva.

“The whole reason we do this is to support charity in Kazakhstan. I think it is absolutely fantastic because none of the money goes to us, even though we work very hard. Every penny goes to the charities. Some of the charities are in Karaganda, mostly in Nur-Sultan. There is one in Almaty. I am not sure this year, because it changes every year. It’s all very worthwhile,” said Gifford.

The ASA also wants to reduce the use of plastic during the event. Many embassies, for example, decorated their baskets in non-plastic wrapping. The British embassy will provide 3,000 cotton bags for shoppers at the bazaar.

Raffle tickets will be sold Nov. 27-29 in the lobby of the Radisson Hotel Astana from 12 p.m. to 3 p.m, as well as during the day of the Charity Bazaar.