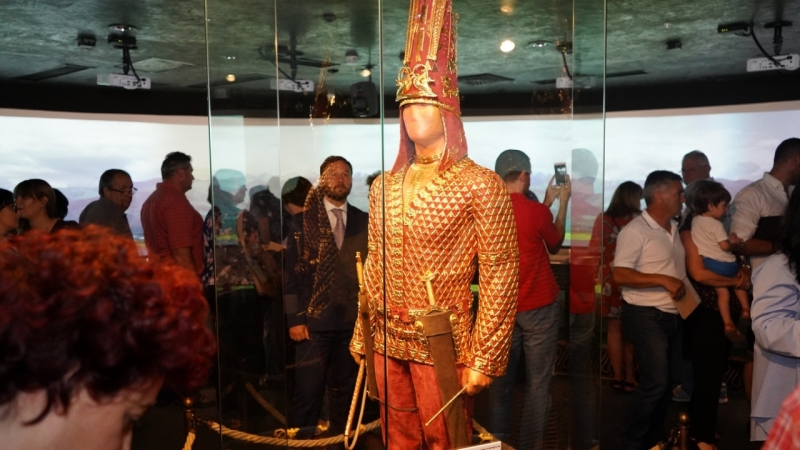 The display, organised by the Kazakh National Museum, is part of The Great Steppe: History and Culture exhibition. Since May 2018, the exhibit has travelled throughout the world, visiting Azerbaijan, Belarus, China, North Macedonia, Poland, Russia, South Korea, Turkey and Uzbekistan. It departed its last destination, Malaysia, on Oct.31.

The exhibit acquaints foreign audiences with Kazakhstan’s rich historic and cultural heritage. As the Kazakh national symbol, Altyn Adam is at the centre with 144 additional items from National Museum finds.

Altyn Adam was discovered in 1969 by Kemal Akishev, the founder of Kazakh archaeology, as he conducted excavations nearby Almaty. He found the grave of a young (approximately 17-18 year old) Saka king in the Issyk kurgan in attire covered with golden pieces; hence the name Golden Man.

The Saka (mighty men in Persian) was an ancient tribe, a branch of Scythian culture that lived in the eastern Eurasian steppes circa fourth-third century BCE.

Altyn Adam was recognised as the discovery of the century, with some naming him “Kazakh Tutankhamun.” As they excavated, archaeologists found more than 4,000 golden pieces including clothing, jewellery, décor and household utensils.

The exhibition in Athens will present the reconstructed Golden Man in clothing embroidered with golden plaques and a head garment, a specific conical shape characteristic of a certain Saka tribe, with golden plaques shaped like arrows, snow leopards, argali, horses and birds.

In addition, the museum will display a collection of early Iron Age (fifth-fourth century BCE) archaeological findings discovered with Altyn Adam in his grave. A silver cup inscribed in runic writing, one of the oldest written alphabets, has a special place in the exhibit.

The ancient and medieval art masterpieces presented in the display are only a small part of the works by nameless masters reflecting the original heritage of the Eurasian steppe culture.