By Aidana Yergaliyeva in International on 12 November 2019

NUR-SULTAN – Kazakhstan and Russia reaffirmed their commitment to strengthening interregional cooperation, as the two countries signed 17 documents on infrastructure, trade and economy, among other areas, at their 16th Interregional Cooperation Forum Nov. 6-7 in Omsk. 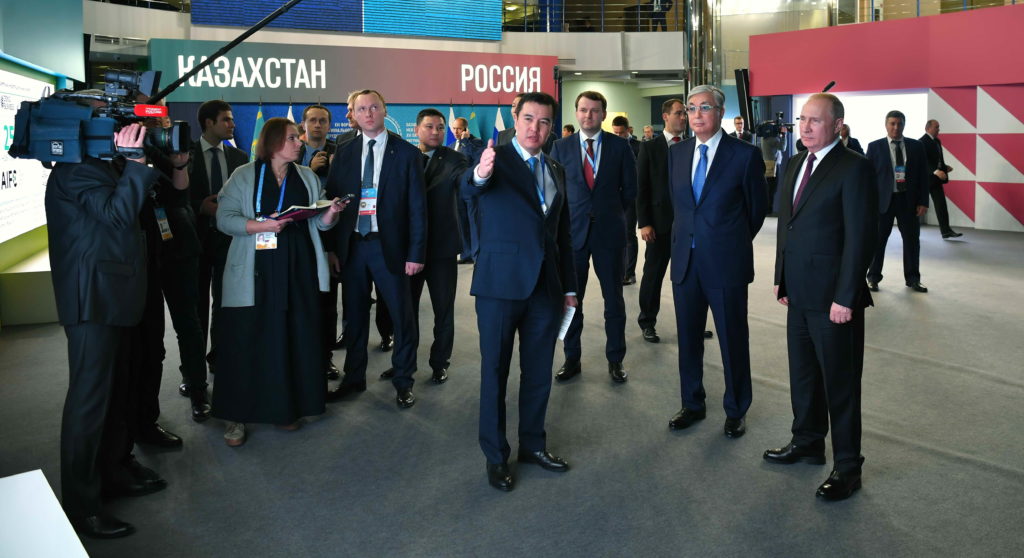 Kazakh President Kassym-Jomart Tokayev and Russian President Vladimir Putin signed the Cross-Border Cooperation Programme. Tokayev, who proposed the programme, noted it “will provide an opportunity to strengthen the infrastructure potential of the border regions.”

“The existing infrastructure no longer meets modern requirements. Therefore, a lot of work remains. Modernisation of border crossings is necessary, taking into account the transnational corridors being formed, including within the framework of the Belt and Road Initiative and North-South megaprojects. Today, there is a need to expand and open a number of additional checkpoints,” he said.

The signed documents also include cooperation programmes between Kazakh and Russian ministries to develop culture, infrastructure and transport, as well as a memorandum of understanding between the Kazakh Ministry of Information and Social Development and the Russian Federal Agency for Youth Affairs.

Tokayev also stressed the importance of the joint action programme in industrial cooperation. He called on ministries, regional administrations and development and export support institutions to cooperate with their Russian counterparts to enter foreign markets. The countries can also benefit from close cooperation of regulatory authorities, he said.

“It’s no secret that agriculture is one of the most sensitive sectors of any economy. The special attention of regulatory authorities to this area is understandable and justified, but it should not be redundant. Therefore, to prevent administrative barriers and ensure promptness in resolving emerging issues, a full-fledged, everyday contact between the relevant ministries and departments is necessary,” he added.

Tokayev also proposed developing a sports cooperation programme and supported the initiative to open a physics and mathematics school based on the Russian capital’s Bauman University. He also noted the possibility of opening a branch of Nazarbayev Intellectual School in one of the Russian border regions.

Damu Entrepreneurship Development Fund and Russian Bank for the Support of Small and Medium Enterprises also signed a cooperation agreement.

Tokayev proposed devoting the next interregional forum in 2020 to the topic of ecology and green growth and organising it in Kokshetau.

“The annual interregional forum has shown itself from the very best side as an effective tool for interaction between regions,” he said. “It significantly expanded trade and investment interaction. From 2003-2018, the volume of mutual trade increased 3.5 times. In 2018, trade turnover exceeded 6.5 trillion tenge (US$16.72 billion).”

The countries have also strengthened their cooperation in energy, oil and gas. The Caspian Pipeline Consortium has delivered more than 500 million tonnes of oil to the global market through the Tengiz-Novorossiysk pipeline since its launch in 2001, said Tokayev.

“These are significant indicators. The consortium is also effective in terms of synergy obtained from combining the efforts of our countries and attracting high-quality foreign investors,” he added.