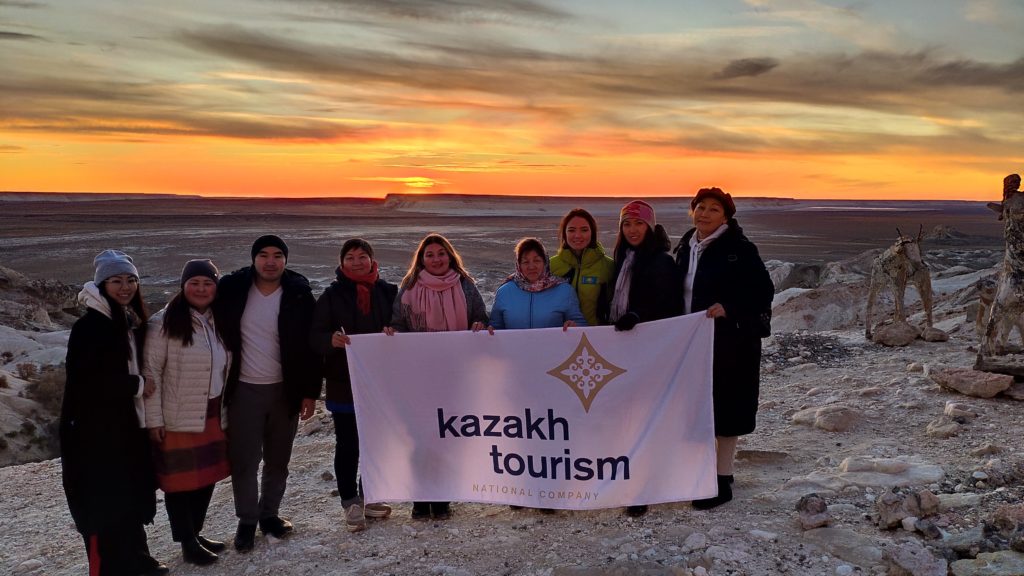 The tour, which started Oct. 30, was part of a cycle of similar trips conducted in an effort to stimulate and tap into the potential of seeing one’s own country. It involved 22 tour operators from the capital and Almaty, Kazakhstan’s largest city, who travelled to Aktau, Saryagash, Shymkent, Taraz and Turkestan.

“The main goal is to show the potential and opportunities of each region for companies involved in the development of domestic tourism to develop tour packages. During the tour, tour operators shared their experience with the region in developing and potentially simplifying routes, improving services, training guides and promoting the region. This is the value of these tours,” said the company.

In Taraz, an ancient city known for its rich historic and cultural heritage, the participants visited Ryskulbekov Park and Zheltoksan Alley, the locations of the country’s highest, 220-metre fountain and Podvig Memorial Complex.

They also saw some of the nation’s most popular tourist and pilgrimage sites, including Aisha Bibi, Babadzha Khatun, Dautbek, Karakhan and Khoja Ahmed Yassawi mausoleums.

While in Turkestan, they participated in the Turkestan: One Way – One History international investment forum, sharing their vision for developing the city that has been the centre of the region of the same name since 2018 and attracted significant national attention.

The tour operators also travelled across the Mangystau Region which, located on the shores of the Caspian Sea, offers numerous historic and pilgrimage sites. Although the destinations are not easy to reach, those who do have the chance to see a landscape stunning in its diversity.

The participants also attended B2B meetings with local tour companies to build new partnerships and exchange ideas on ways to improve tourism in the region. The sessions concluded by signing 132 agreements.

The tour operators noted the cities on their route, which in the past were along the Silk Road, may generate interest among both foreign and local tourists.

They also drew attention to some recurring problems noticed during their travels, including the lack of English-speaking guides and the need to develop infrastructure to ensure more comfortable conditions and organise entertainment events.

The first trip in May involved tour operators from four regions in western Kazakhstan. They travelled to the capital, Almaty, the Almaty Region, Burabai area, East Kazakhstan Region, Saryagash and Shymkent.

Nearly 800 agreements were signed as a result of the tours. A third trip is slated to the Burabai area at the end of the year.