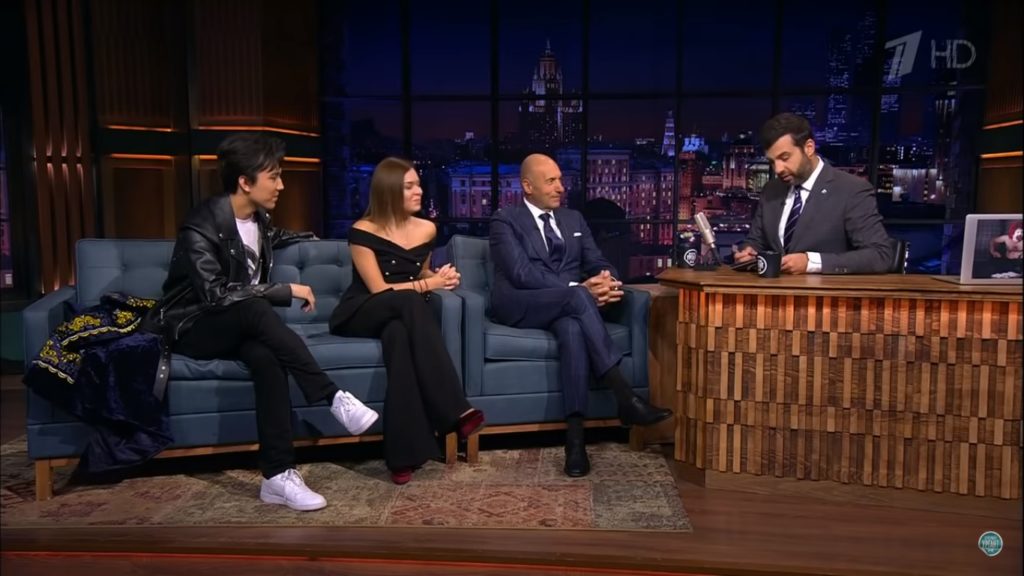 Dimash, as he is known to millions of his fans throughout the world, flew to Moscow following the Oct. 26 concert in New York dedicated to Krutoi and his work and stayed until Nov. 3 for a similar concert there. The show is a mixture of musical and figure skating performances.

The interview with the trio started with Dimash’s fans chanting his name and waving placards. Host Ivan Urgant was shocked by their support.

“Igor Yakovlevich [Krutoi], I have a question for you. You have a big night, [yet] everyone screams ‘Dimash.’ Do you regret inviting him to the show?” he joked.

Krutoi replied with a wordplay saying Dimash was also Krutoi, Russian for “cool.”

Urgant congratulated Krutoi and played a game to see if he could remember all his songs. He also asked Dimash and Sotnikova about their favourite Krutoi tunes.

Much of the interview was devoted to Dimash’s meeting with Jackie Chan.

“We’ve met with Jackie Chan a couple times before. Even though he’s ‘the’ Jackie Chan, he’s still a human. He is the most famous person in the world, perhaps even more famous than almost all of the presidents,” said Dimash.

“Except one,” said Urgant.

He recounted the story of their first meeting. Chan’s manager contacted Dimash’s assistant several days after the first staging of “I’m a Singer” in China.

“When my assistant told me about it, I was trying to comprehend it for 10-15 seconds. He set up a meeting and I remember how I trembled before opening the door. He was recording a song; I was about to enter and my heart was pounding,” said Dimash.

He noted Chan is extremely energetic and a humble man, an ordinary guy. 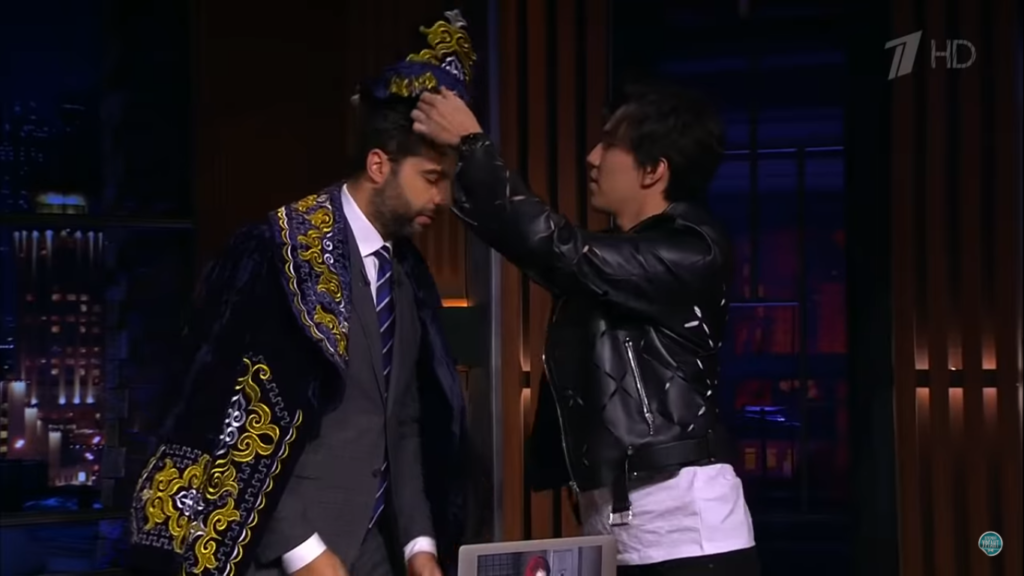 Amid the jokes, Dimash took a moment to present Urgant with a shapan (traditional Kazakh male overcoat) and matching hat. As he dressed the host, he noted the items are customarily given to respected people.

“There’s only two people in the world who have such a thing, me and Nicolas Cage,” quipped Urgant referring to the time the actor visited Kazakhstan in 2017 and the subsequent popular meme.

Dimash will perform his solo concert at New York’s Barclays Centre in December. In February, he will tour Russian cities of Krasnodar, Kazan and Yekaterinburg.