By Aidana Yergaliyeva in International on 19 November 2019

NUR-SULTAN – Kazakhstan and Italy can offer each other huge opportunities for growth – it is just a matter of time until the two build stronger relations, said Italian Undersecretary for Foreign Affairs and International Cooperation Manlio Di Stefano in an exclusive interview for this story. 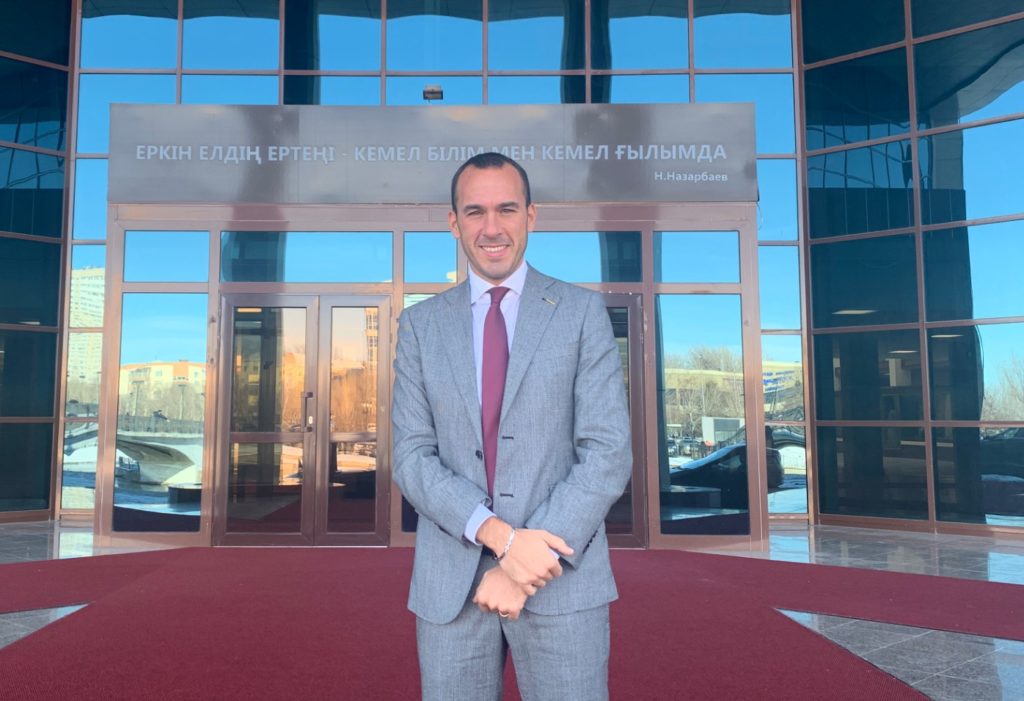 Kazakhstan is seeking ways to diversify its oil-based economy, while Italy is looking for new cooperation opportunities in areas such as agribusiness, technology, cybersecurity and aerospace. These can create a good match and “we just need to choose where you want to add cooperation,” he noted.

The countries already enjoy “a good framework of bilateral agreements. Therefore, there is nothing huge to reform,” he added.

The door to new opportunities will open with the EPCA (Enhanced Partnership and Cooperation Agreement), an agreement between Kazakhstan and the European Union (EU).

“The Italian parliament just approved the ratification of the EPCA. This is an agreement that could bring some new opportunity for the country,” said Di Stefano.

The agreement is awaiting the signature of Italian President Sergio Mattarella.

“This (agreement) obviously will boost and improve cooperation between Kazakhstan and the European Union,” he added. “I think that now it is just the matter of insisting and stressing on the projects, because there is the demand; there is the market and you need to just put them together.”

Agriculture is one of Italy’s key economic sectors, accounting for 2.1 percent of the country’s gross domestic product (GDP), reported export.gov.

“We are inter-domestically pushing a lot on innovation, what we call Industry 4.0. It is like a big set of reforms to have companies digitalise and to be able to be more interconnected at the global level, then we are pushing a lot on cybersecurity and aerospace, for example. But the reality is that we are starting from a very small company working on agriculture and on to the defence industry; we are trying to innovate every process,” said Di Stefano.

In recent years, Kazakhstan has initiated a plan to develop and digitise its farms and agricultural investment support has increased every year. Investments in fixed assets nearly doubled to 263.7 billion tenge (US$678.8 million) in the first eight months of 2019.

“This will obviously help the management of all the relationships with the local bureaucracy administration and governance. What we are trying now at the  [Kazakh-Italian Business] forum is to match companies, Italian companies with local companies, and start some joint ventures,” he added.

Di Stefano noted Kazakhstan is making an effort to provide a comfortable environment for foreign investors and companies. The government, however, still needs to revise its legislation on the way foreign business should operate in the country. The government needs “to create a domestic framework of rules that are internationally recognised, that can protect the investment, and some simplification of the bureaucracy in order to speed up everything,” he said.

“In Italy, we have a few big companies and most of them are already based here. But the reality is that more than 90 percent of our economy is made of small and medium enterprises. Small and medium enterprises, they cannot have risks. They are not used to taking risks, because their budgets are not so big. When they try to work abroad, they need to have a certain framework of rules that protect their own investment. That’s what I am discussing with your government to fix the procedure that is not in the standard of the union approach in order to facilitate this,” he added.

Another deterrent is the lack of a general understanding of what Kazakhstan and the countries in Central Asian represent. For Italian business circles, it is not the fear of the “stans,” but simply the lack of awareness about the possibilities of doing business in the region.

“I think that sometimes there is no consciousness of what the ‘stans’ are. We are talking about the countries in terms of logistics – that are huge in some way and are far away from Italy, but they have a huge potential. We are trying with our government to create some consciousness about it,” he said.

While on his November business trip to Central Asia, Di Stefano intends to introduce Italian businesspeople to the region and its many opportunities, he said. The country’s business community will have a better chance to become acquainted with everything Central Asia has to offer at the Dec. 13 Italy-Central Asia government and business conference in Rome.

“What we want to have is a conference that is not just commercial, but it is also about business, culture, science and, in general, political cooperation. And what you want is to make it periodic – every couple of years, for example. So, we want to create this consciousness in Italy to make companies understand that the ‘stan’ countries are a huge possibility,” said Di Stefano.

At the political level, this will also be a means of keeping Central Asia closer to the EU.

“We think that this is a good environment for everyone. You are straight in the centre between Europe and Asia. So, we think that already now, but mostly in the future, you can have a strategic goal for the so-called Eurasian connectivity. So, the more we keep you close to the European Union, the better it is, I think,” he added.

The first seed of business cooperation between the countries came at the Kazakh-Italian Business Forum Nov. 13 in the capital. The session gathered approximately 200 representatives of business circles to discuss coordination possibilities in renewable energy, petro chemistry, manufacturing and agribusiness.

Cooperation between the nations has been strengthening each year since a strategic partnership was formed 10 years ago and Italy is Kazakhstan’s second biggest trade partner overall. To date, Italy has invested $6.6 billion in the Kazakh economy and approximately 270 companies using Italian capital operate in the country.