By Zhanna Shayakhmetova  in Nation on 22 November 2019

NUR-SULTAN – The first eight months of Kazakh President Kassym-Jomart Tokayev’s term have been marked by developing and implementing new approaches and solutions towards strengthening a socially oriented and business friendly state. 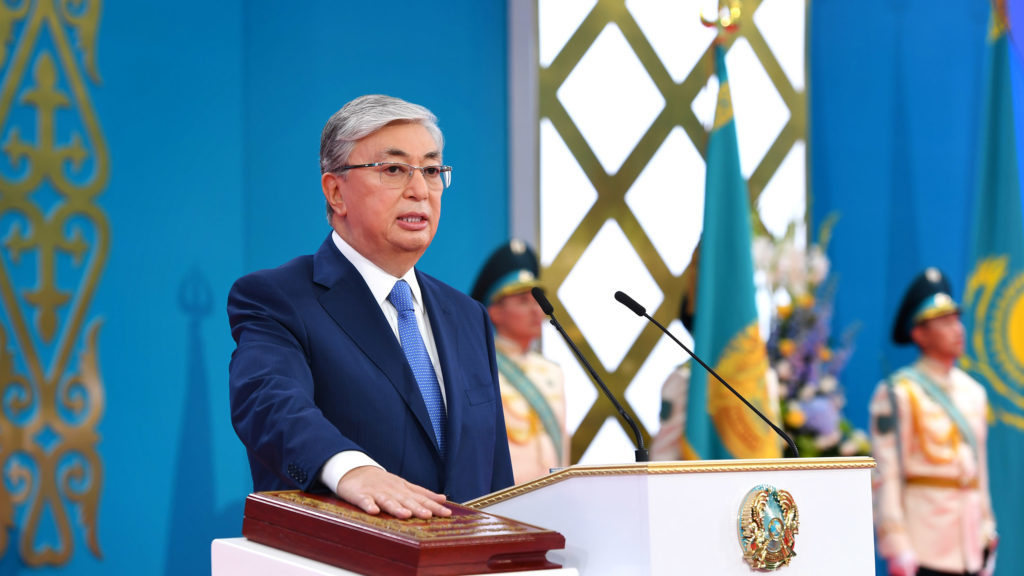 He announced plans at the June 12 inauguration ceremony to continue the strategies developed by Kazakhstan’s First President, Nursultan Nazarbayev, including the Modernisation of Kazakhstan’s Identity and Five Institutional Reforms.

“Today, we are able to double the achievements of our independence and to bring our country to a qualitatively new stage of development. We can achieve this by maintaining the continuity of the policy of the leader of the nation and through systemic reforms. As you know, this was the basis of my pre-election programme. At the moment, state bodies are doing the necessary work to implement it,” said Tokayev Sept. 2 in his first state-of-the-nation address.

Speaking at the July 15 government meeting, Tokayev instructed officials to provide immediate debt relief to some of the country’s most vulnerable groups – large families and people with disabilities. By the end of the summer, the debt relief was effected, impacting the lives of more than one million people.

He called for the government to conduct an audit of all agricultural land and digitise the land registry system by the end of 2020 after the Ministry of Agriculture reported on 16.5 million unused hectares.

“Land is the main factor of production. Without efficiency and transparency, we cannot develop our rural areas. We understand that this is a difficult job; here, you need a harmonious interaction of the ministries of agriculture and digital development,” he said.

A theft investigation project will be conducted on light rail transport (LRT) construction in the capital to prevent poor quality and ineffective project planning funded with budget money.

Functioning platforms for feedback from the population are of great importance. Particular attention should be paid to work with social networks.

Tokayev established the National Council of Public Trust July 17 to promote the concept of a “listening state.” Its main objective is to “formulate suggestions and recommendations on the current issues of the state policy based on a broad discussion with the representatives of society, political parties and civil society,” reads the decree.

Its list of members includes 44 public figures, civil society and human rights activists, journalists, children’s rights commissioners and an ombudsperson to protect entrepreneurs. After its initial meeting in September, the council is expected to reconvene shortly to take stock of the progress made so far in drafting reform proposals.

First State of the Nation Address

The state-of-the-nation address focused on constructive public dialogue as a basis for a stable and prosperous Kazakhstan.

Tokayev instructed the government and legislators to help strengthen civil society and social security, support domestic businesses and develop the economy. Political transformation “will be implemented gradually, taking into account interests of the state and people,” he said.

“If peaceful protests do not pursue the goal of violating the law and the peace of citizens, then they should be embraced and given approval to be carried out in the manner prescribed by law, to allocate special places for this, and not in the outskirts of cities,” he said.

A 25-percent reduction in the number of civil servants and national company employees is expected by 2024.

The President noted punishments for drug dealing, paedophilia, sexual assault and other serious violations of the law should be toughened.

Reforming the law enforcement system is one of the most pressing tasks and the work of the Committee of Administrative Police is expected to be reorganised by the end of the year.

“The image of the police, as a power tool of the state, will gradually become a thing of the past; it will become a body providing services to citizens to ensure their safety,” said Tokayev.

Effective small and medium-sized businesses are seen as “a solid foundation for the development of cities and villages.” Approximately 100 billion tenge (US$260 million) has been allocated from the National Fund to support businesses and the government will allocate an additional 250 billion tenge (US$647 million) for the next three years as part of the Business Roadmap.

A three-year ban on inspections of micro and small businesses will come into force in January.

The President also addressed an issue of public concern, noting “our land is not for sale to foreigners.”

He set the goal of increasing teachers’ salaries two-fold over four years, and their salaries will grow already by 25 percent in 2020.

To create equal opportunities for individuals with special needs, the government will allocate at least 58 billion tenge (US$150 million) over three years, a programme included in Tokayev’s election platform.

Next year has been declared the Year of the Volunteer.

“The urgent task is to expand the participation of citizens, especially youth and students, in volunteer activities, to instill in them the skills for an active life. This is an important part of our work to strengthen civil society,” he said.

The President urged strengthening mutual confidence, constructive dialogue and interaction to ensure security and cooperation in the Shanghai Cooperation Organisation (SCO) space at the June 13 SCO heads of state meeting in Bishkek. The SCO Action Plan for 2018-2022 on long-term good-neighbourliness, friendship and cooperation needs to be fully implemented.

“Terrorism is a global threat and requires additional efforts to ensure cybersecurity. Establishing the SCO Information Security Centre would be an important contribution to the protection of the organisation’s information space,” he said.

The President reaffirmed the country’s commitment to a nuclear-weapons-free world in his Sept. 24 address to the 74th session of the UN General Assembly in New York. He emphasised Kazakhstan’s role as a mediator on the regional and global scale because Asia’s growing economy “demands a more integrated continental security architecture.”

He proposed transforming the Conference on Interaction and Confidence-Building Measures in Asia (CICA) into a full-fledged regional organisation for security and development when Kazakhstan assumes its chairmanship in 2020.

The nation “is ready to support bilateral and multilateral actions aimed at finding viable peace and confidence-building solutions” regarding the situation in the Middle East and proposes an inclusive dialogue as a solution.

“Thanks to the Astana Process [on Syria], which complements the Geneva talks, the cessation of hostilities has been reached. The de-escalation zones with conditions for a safe return of refugees have also been established. We all know that conflicts are devastating and give rise to terrorism and extremism. These can only be defeated by joint actions through a Global Anti-Terrorism Network under the auspices of the UN,” he said.

“Some 595 Kazakh citizens trapped by terrorist propaganda, including 406 children, returned back home from the war zones in Syria. We are ready to share our experience with other countries and urge them to take similar actions,” he said.

He noted Kazakhstan’s political structure is based on “a strong and visionary president, an influential parliament and an accountable government.”

“My ultimate goal is to ensure that millions of my fellow countrymen benefit from large-scale reforms and enjoy an inclusive society, robust economy, high-quality education and advanced healthcare. Kazakhstan will not become a success story in its social-economic development unless profound political transformation is accomplished,” he said.

Tokayev’s vision is based on the concept of different opinions, but one nation.

“It is through dialogue that we should move forward. Big changes will affect all law enforcement agencies and the courts to uphold the rule of law in every sphere and the everyday life of our citizens. Populism is about mediocre policy. I am not in a position of giving empty promises, but pursuing concrete deeds,” he said.