By Nazira Kozhanova in International on 12 November 2019

NUR-SULTAN – The fifth annual Astana Club meeting started Nov. 11 with the “World (Dis)Order: Who writes the history of the future” discussion of international politics and Eurasia and Central Asia’s place in it. 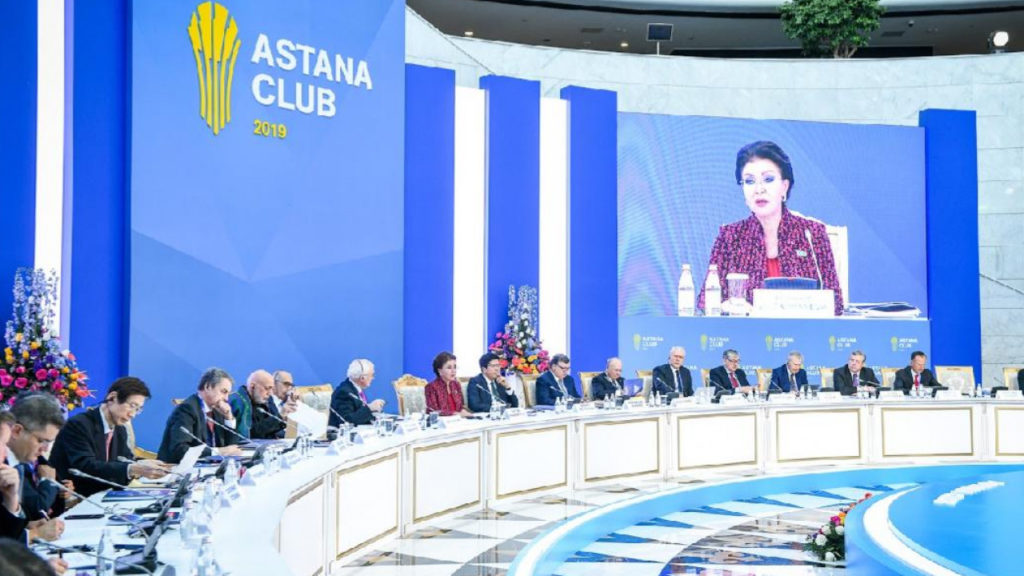 “If you look at the geography of the most acute global conflict nodes of recent times, you cannot help but see that they are all concentrated in the Greater Eurasia or around the Greater Eurasian region. Trade super-war, economic sanctions and counter-sanctions, ongoing military conflicts, geopolitical confrontation, the destruction of the trust regime and the system of control over nuclear arsenals. That’s all we mean when we talk about undermining strategic stability. Today, we talk about it more and more often and this directly affects Greater Eurasia,” said Kazakh Senate Speaker Dariga Nazarbayeva in her remarks at the opening of the two-day meeting.

The centre of global development will only move closer to the Greater Eurasian region due to China’s economic growth, noted Russian Dialogue of Civilisations Research Institute Director Vladimir Yakunin.

“The centre of global development will inevitably move into the Greater Eurasia territory. This space is awakened from a hundred years of sleeping. According to available estimates, in 2019, China’s GDP for the first time will exceed $14 trillion. This is two-thirds of the corresponding indicator of the American economy,” he said.

Nazarbayeva emphasised the importance of the dialogue for solving the most pressing global problems, adding the Astana Club is the country’s contribution by providing a discussion platform.

“I am convinced that the only viable alternative to economic, political and military confrontation is global cooperation. The cooperation is impossible without an honest, direct and open dialogue. Only as a result of such a dialogue can new realities, reflecting modern situation and rules of the game appear on the Eurasian continent and around the world. In this sense, the meetings and discussions of the Astana Club are always a frank talk about the most important (problems). This is the contribution of our country, dear colleagues, in the building of a new architecture for global cooperation,” she said.

Former Spanish Prime Minister José Luis Zapatero agreed with Nazarbayeva about the pressing need to respond to global challenges by strengthening the multipolar world and instruments of cooperation.

“The technological race, climate change and increasing social inequality are three challenges that, in my opinion, we must find a way to respond to. We must strengthen the EU (European Union), the union of African countries and strengthen cooperation in Central Asia and Eurasia and all this must happen in cooperation with the UN. Trade wars only worsened the situation from an economic point of view. This all generates a certain general rejection. We need to strengthen the multipolar world and need to support a peaceful resolution to many conflicts,” he said.

The Shanghai Cooperation Organisation (SCO) is another platform with high potential for tackling the main global problems and can contribute to solving extremism and terrorism issues, said former Afghan President Hamid Karzai.