By Nazira Kozhanova in Nation on 16 October 2019

NUR-SULTAN – Turkestan’s new media centre and regional akimat (administration) building projects were completed Oct. 9, reported Otyrar.kz. With both structures finished, only the work in the surrounding areas is still to be completed by the end of the month. 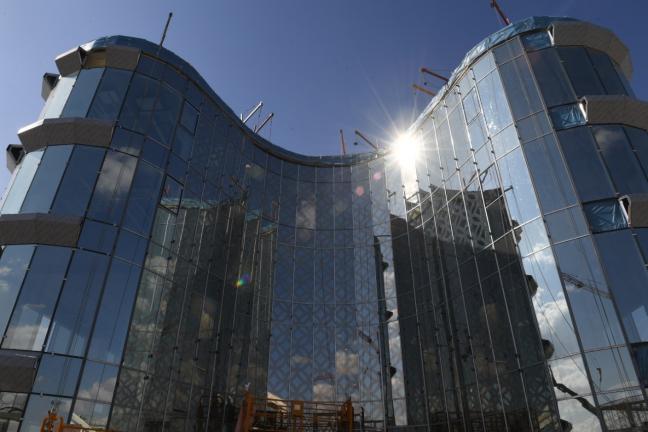 The media centre is the second largest in Kazakhstan following the one in the capital.

“The building consists of four floors. We estimate that 500 people will be able to work here. On the second floor there will be a studio and hardware complex; on the third and fourth floors, there will be an open space for journalists,” construction project head Kuat Zhumagulov told 24.kz.

The media centre is expected to provide the region with an impetus in media development, particularly by providing a platform for new media projects, said Beisenbai Tazhibayev, head of the region’s internal policy department.

“We plan to open a new TV channel on the basis of the media centre. A joint edition of local newspapers will be created. An information agency will operate here. The media centre will be equipped with the latest technology,” he told 24.kz.

The media centre is the first in a series of administrative buildings planned for construction in Turkestan. It is particularly important to the region due to the abundance of media representatives.

“There are more than 80 media representatives in the Turkestan Region. Fifty-five of them are newspapers and magazines. All the local media have certain directions. All of them work for the development of the region. This year, we plan to open a media centre. All conditions for the journalists’ work will be created,” said regional internal policy department head specialist Gabit Saparbekov.

Funding for the new akimat building, located near Nur-Sultan Square, was provided by the capital akimat. The building will also house additional governing bodies.