By Aidana Yergaliyeva in Nation on 10 October 2019

NUR-SULTAN – The National Library for People with Blindness and Visual Impairment gathered young librarians from all regional specialised libraries Sept. 26-27 for its first nationwide meeting in Almaty. The session encouraged participants to share their success stories and exchange experiences on developing library science. 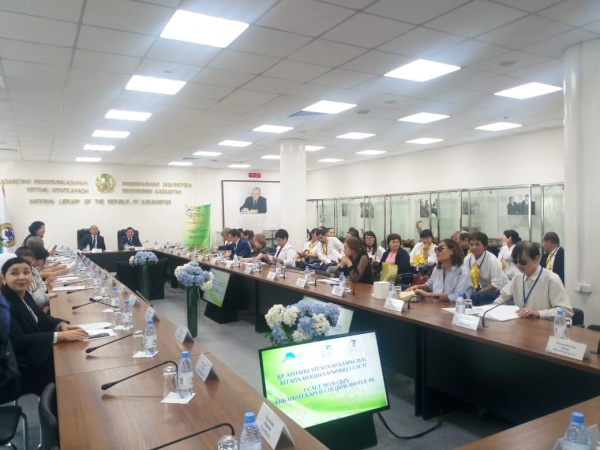 The two-day meeting was composed of lectures, seminars and master classes for young librarians as part of the Year of Youth.

Young people are apparently less interested in pursuing library science as a career. The national specialised library organised the meeting to change this thought and “to encourage and support young librarians in their creative search for new forms of library services for people with disabilities and to provide young librarians with the opportunity to prove themselves in the further development of librarianship in specialised libraries,” Zakhra Makhanova, advisor to Library Director Askhat Baiuzakov, told baigenews.kz.

“It is no secret that today, most of the specialists are middle and senior managers. Therefore, the staffing problem is acute, but we are trying to solve it by involving librarianship youth,” said Baiuzakov in his opening speech, reported bnews.kz.

“Each library works at its own pace as usual, but the processes of book exchange and exchange of experience are somewhat lagging behind. We want to update all this work, discuss our problems with you and strengthen interlibrary relations,” he added.

The National Library for People with Blindness and Visual Impairments has literature in dot-relief typeface and large print, phonograph, film, tactile, voiced, electronic and relief-graphic editions.

The library fund, with 248,410 storage units, offers wide choices of classical works by domestic and foreign authors, poems, science fiction and fiction, as well as publications in several languages in all educational areas. It has approximately 3,000 visitors per year.

The national library was recently equipped with two audio studios for people with blindness. It will soon also provide access to audio books in official languages.

“First, we will draw up an annual plan taking into account the demand for books, then we will create their audio copies in Kazakh and Russian,” said Baiuzakov.