By Aigerim Seisembayeva in International on 28 October 2019 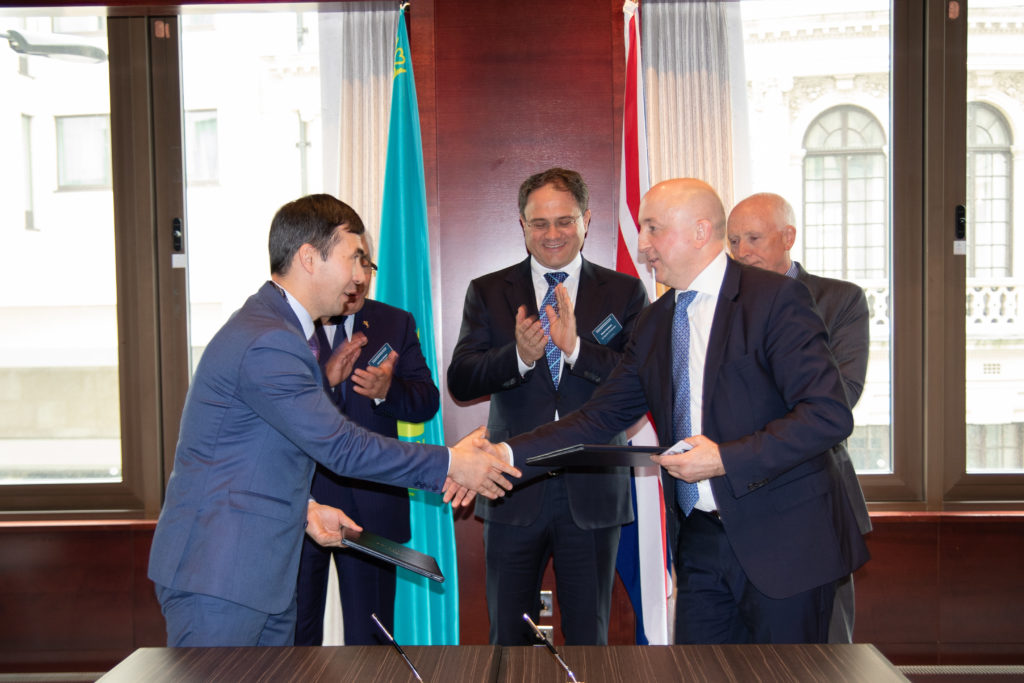 More than 200 business executives attended the forum, which discussed business opportunities in Kazakhstan and the country’s latest political and economic transformations.

Some forum participants noted the strategic location of Kazakhstan between Europe and Asia could allow the country to become an important commercial partner for the UK after Brexit.

“Kazakhstan is the largest economy in Central Asia, accounting for more than half of the region’s GDP. We are also widely considered to have the best investment climate in the region, having attracted over $300 billion in foreign direct investment since independence,” Vassilenko stated in his opening address. 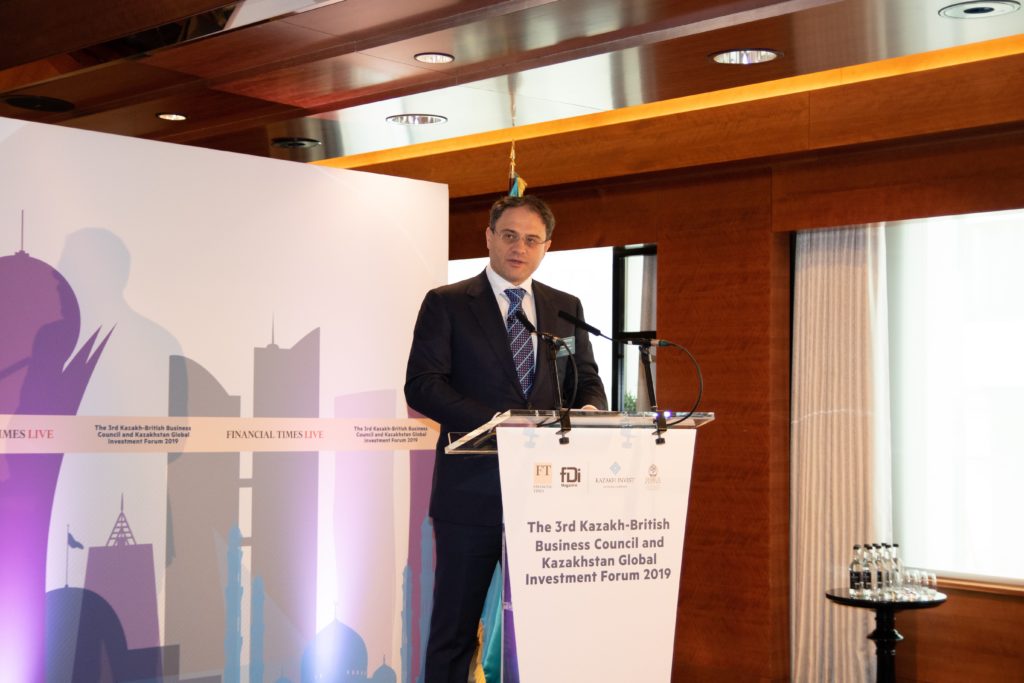 He stressed that besides the business climate, foreign investors are attracted by Kazakhstan’s political stability demonstrated, among other developments, by the smooth transition of power and the election of the new President Kassym-Jomart Tokayev, earlier this year. They are also attracted by a well-educated workforce and access to a fast-growing regional market of 500 million consumers.

Vassilenko also added the Kazakh Foreign Ministry, which was tasked at the end of 2018 with attracting investment into the key sectors of the economy, is working to achieve that goal.

The forum’s keynote speakers included the Chair of the Board of the Samruk Kazyna Sovereign Wealth Fund Akhmetzhan Yessimov, Governor of the Astana International Financial Centre (AIFC) Kairat Kelimbetov, UK Minister for Investment at the Department for International Trade Graham Stuart MP, UK Prime Minister’s Trade Envoy to Kazakhstan Baroness Emma Nicholson, Chair of the All-Party Parliamentary Group on the Belt and Road Initiative Faisal Rashid MP and the President of the European Bank for Reconstruction and Development (EBRD) Sir Suma Chakrabarti.

Speaking at the plenary session, Stuart said the “UK is now one of the biggest foreign direct investors in Kazakhstan, showing the confidence our firms have in your dynamic economy. Hundreds of British companies have their licenses to operate in Kazakhstan with total trade between our nations worth £2.7 billion (US$3.5 billion) last year. Now, as the UK prepares to leave the European Union and become truly a global champion of free trade, we want British firms to play an even more central role in helping Kazakhstan grow and develop over the coming decades.”

Kazakhstan’s Oct. 24 improvement from 28th to 25th on the 2020 World Bank Doing Business report serves as a testimony to the effectiveness of the efforts in improving the country’s investment climate, officials noted.

“At the heart of Eurasia Kazakhstan’s GDP has expanded four percent in the past two years and it provides a wonderful stable platform for which we are deeply grateful for British companies to access their neighbours in the Eurasian Economic Union, China and Uzbekistan. And Kazakhstan has attracted the lion’s share of inward investment into the heart of Eurasia. And today, the Astana International Financial Centre and many other institutions will show us the potential investment opportunities and perhaps give us more current possibilities of the privatisation programme of state-owned companies,” Baroness Nicholson said.

Yessimov said Samruk Kazyna approved a new strategy to diversify income by investing in new industries. He noted that over the next five years, the fund plans to invest more than $38 billion in those areas, where $32 billion will be foreign investments of which British companies are expected to be a part.

The AIFC, which operates on the principles of English common law, was said to be an important platform for attracting investment as it has the appropriate financial instruments and provides international level services. Investors operate in favourable conditions, which include an independent regulatory mechanism, a court and an international arbitration centre that meet international standards.

Kazakhstan’s participation in China’s Belt and Road Initiative attracted attention in terms of the prospects of developing a tripartite partnership between the United Kingdom, Kazakhstan and China on the principles of combining the British project management system, Kazakhstan’s resources and Chinese investments.

On the sidelines of the forum, Vassilenko met with top British business executives and the leadership of international organisations, including the European Bank for Reconstruction and Development (EBRD), GlaxoSmithKline, Gap Insaat, Investcorp, Independent Power Corporation, United Green, Worley Parsons and International Development Ireland, Ltd., among others.

The third meeting of the Kazakh-British Business Council, co-chaired by Baroness Nicholson and Yessimov, discussed cooperation in the privatisation programme for Samruk Kazyna’s portfolio companies.

Samruk Kazyna signed an agreement with Da Vinci Capital investment company on the creation of a $100 million joint private equity fund. Under the agreement, the fund is to invest at least $40 million in Kazakh enterprises in the IT and digitisation sectors to facilitate their development and subsequent IPO.

The fund also signed a co-investment agreement with EDP Renovaveis, the world’s fourth largest solar and wind power company, on the joint implementation of renewable energy projects in Kazakhstan. EDP Renovaveis is to implement a project to build a 250-megawatt solar power plant in Kazakhstan.

The event also saw the signing of two memoranda of cooperation. The first was between the QazIndustry Kazakhstan Industry and Export Centre and the International Development Ireland, Ltd. on assistance in attracting Irish investment projects worth at least 50 billion tenge (US$120.3 million) to the territory of Kazakhstan’s special economic and industrial zones. The second memorandum was between the Ministry of Healthcare of Kazakhstan and the Gap Insaat company on the construction of a 350-bed hospital in Aktau using financing provided by UK Export Finance.

The forum also included the awarding ceremony of the Global Free Zones of the Year 2019 prize annually awarded by fDi Magazine to some of the 5,000 free economic zones of the world. The Turkistan Special Economic Zone in the south of Kazakhstan won in three nominations: in the Asia-Pacific region for supporting small and medium-sized enterprises, the Ones To Watch editor’s choice award and Best Marketing Slogan, “Honoring the past, creating the future.”

During the second day of the visit, Vassilenko and the UK Minister of State for Europe and the Americas Christopher Pincher MP confirmed that Kazakhstan and the UK seek to strengthen the strategic partnership in the context of the social and political processes taking place in the two states, such as Brexit and Kazakhstan’s political transformation.

“Kazakhstan’s modern political system is transparent, reliable and stable and ensures constitutional continuity of power in accordance with the legislation of the Republic of Kazakhstan. We pledge to remain on the strategic course in Kazakhstan’s foreign and domestic policy,” Vassilenko said during the meeting, according to a Kazakh MFA press release.

Pincher, in turn, praised the dynamics of Kazakhstan’s political modernisation and reiterated the UK’s commitment to developing the strategic partnership with Kazakhstan. He also said the opening of the AIFC is a significant achievement of bilateral cooperation.

The sides discussed the new draft agreement on strategic partnership and cooperation between the two states, the signing of which is expected after Brexit.

Speaking about the situation in the Central Asian region, the sides noted Kazakhstan’s efforts to help restore peace in Afghanistan, including the educational project for Afghan women recently launched in Kazakhstan and funded by the European Union.

They also discussed cooperation in defence and security, cultural cooperation, education and science.

The sixth meeting of the Kazakh-British Intergovernmental Commission on Trade, Economic, Scientific, Technical and Cultural Cooperation (IGC) chaired by Vassilenko and UK Minister of State for International Trade Conor Burns MP was the final event within the visit.

More than 50 British business executives and representatives of both countries discussed the IGC’s progress over the past year and outlined areas for multifaceted cooperation, including in oil and gas, finance, education, technology and mining.

Vassilenko urged the two countries to develop a dialogue based on “commodities-for-technologies-and-investment” exchange that is then to be followed by joint ventures providing value-added services.

“Kazakhstan is precisely the kind of rapidly transforming and diversifying economy that our companies in the UK are aiming for. This government stands ready to offer you the support you need to invest in this flourishing market to partner with Kazakh firms and grasp the ripe opportunities that lie ahead,” said Burns.

The IGC session enabled its five working groups to proceed with more detailed discussions on cooperation in oil and gas, mining, healthcare, education and financial services. Corporate management development at the AIFC, new Model Civil Aviation Regulations introduction, the establishment of public-private partnership projects in healthcare, technical and vocational schools and other topics have been tabled for the working groups discussion.

A specific reference was also made to water management in rural areas, animal farming and waste management.

The IGC meeting was topped with the signing of a protocol that secured the shared intention to join forces to push forward strategic partnership in all areas of cooperation.

The meeting also saw the signing of bilateral documents. Officials and executives signed a memorandum on financing investment projects in Kazakhstan with the participation of British businesses between Baiterek Holding and UK Export Finance and a joint venture agreement between Artex Construction, LLP and Independent Power Corporation, PLC (IPC) to create a Clean Energy power development company focusing on a 250-megawatt gas-fired CCGT project in Aktau. They also signed a memorandum of understanding between Artex Construction, LLP and IPC to create a Digital Joint Venture to develop a greenfield data centre in Aktau where clean, uninterruptible gas-fired and renewable energy is required to meet the needs of Western Kazakhstan. Also signed was an agreement between Kazgeology and Astra Mining on the exploration of three deposits in Kazakhstan. Representatives also signed an agreement between Aurora Mining and RPA Inc. on the provision of consulting services in subsoil use.