By Diana Vassilenko in Culture on 7 September 2019

NUR-SULTAN – A Ukrainian archaeologist recently solved the mystery of an ancient silk cloth from the era of the Golden Horde found in 2008 on the site of an ancient necropolis near Ekibastuz. 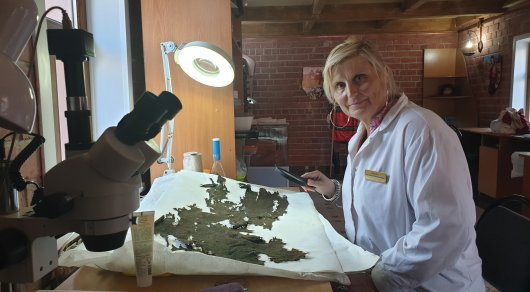 “Judging by the type of gold threads that were used in the embroidery of the fabric; it comes from the Eastern Mediterranean. The style of the embroidery itself also corresponds to the Middle East. That is, it’s Damascene work. From the text, we can conclude that the artefact is related to the Mamluk sultans, who ruled Egypt and Syria from 1250 until 1517 and to the steppe nobility of the middle reaches of the Irtysh River,” said Ukrainian archaeologist Tatyana Krupa. Krupa was invited by Margulan Centre scientists at Pavlodar State Pedagogical University to help solve the mystery, Tengrinews.kz reports.

Krupa is a specialist in ancient and medieval fabrics and conducted her research using scanning electron microscopy methods. 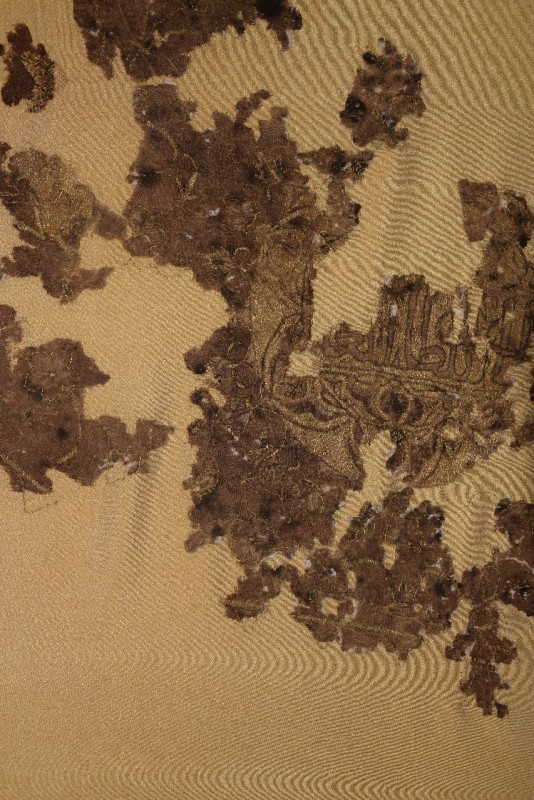 Fragment of the cloth with an embroidered golden Arabic inscription.

Krupa predicts the person who presented the cloth as a gift lived after Caliph Abu Bakr, who was born in Mecca in 573 AD and died in Medina in 643 AD.

“Such gifts were given primarily for military assistance. Perhaps someone from the local nobility of that time received a large award for military merit and a military campaign,” she said.

“At the end of July this year, I deliberately made a visit to the National Museum to look at the fabric again. I collected some microsamples. I was interested in its place of origin. After all, the presence of the Arabic inscription itself with such a serious text indicates that what we are working with are high status textiles,” Krupa.

The words “Gift of the Sultan to the Greatest” are embroidered in Arab on the fabric in gold. The artefact is currently displayed in the National Museum of Kazakhstan in Nur-Sultan.

Krupa and the Pavlodar scientists are also studying an old female headdress found near Shiderty Village in the Pavlodar Region. The burial in which the headdress was found dates back to somewhere around the end of the thirteenth and the beginning of the fourteenth centuries. The scientists are convinced, however, that craftsmen made the item before the Genghis Khan era.

“The female headdress has iconographic images. They are similar to the patterns of the people from the Polovtsian part of Southeastern Europe. The same kinds are found in Ukraine. So far we have attributed the dress to the Kimek-Kipchak type. It appeared about a hundred years before the burial in which it was laid. That is, it’s clearly from a pre-Mongolian time. And it’s a great success for us, because there are no such headdresses in the world. Everything, including the fabric, the birch bark design, the leather details, the silver trim, is well preserved. Most likely, this headdress belonged to a woman of an honourable age respected by the society,” Krupa said.