NUR-SULTAN – Kazakh President Kassym-Jomart Tokayev delivered his first state-of-the-nation address as the head of state at the Sept. 2 joint session of the Kazakh Parliament. The hour-long address provided specific instructions to government officials and calls on legislators to help strengthen civil society and social security, support domestic businesses and develop the economy. 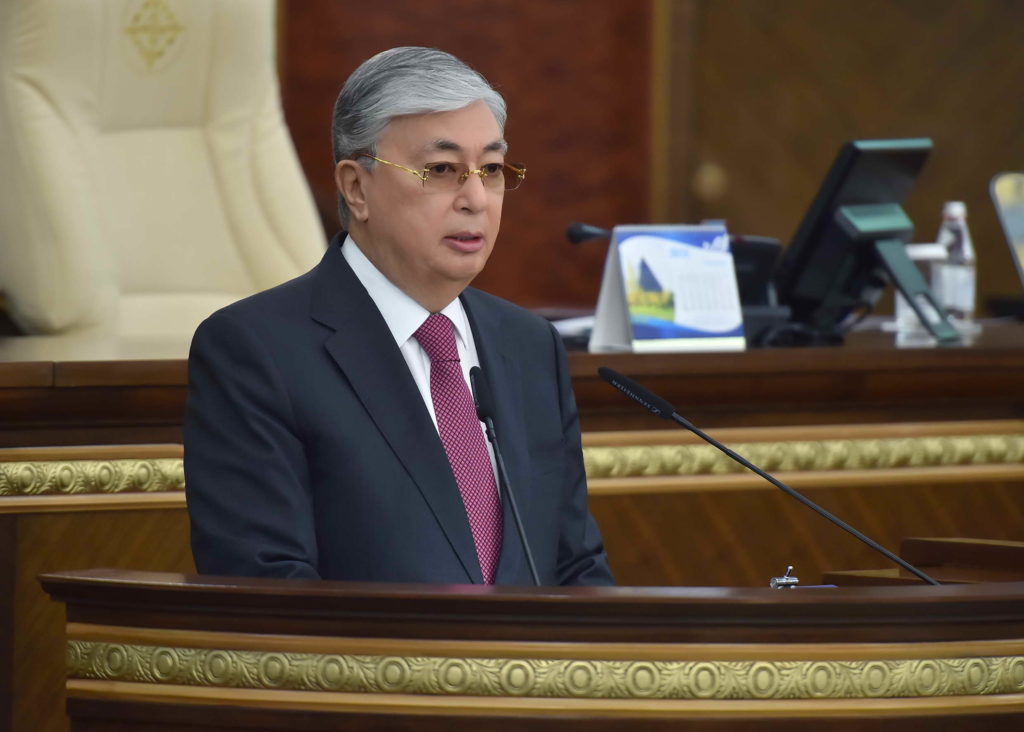 Kazakhstan will continue its development by progressing the model set forth by Kazakhstan’s First President, Nursultan Nazarbayev, said Tokayev.

“The political transformation that I promised will be implemented gradually taking into account interests of the state and people. We will pursue political reforms without running ahead of ourselves,” he said.

The changes will start with an increase in civil society’s involvement in shaping government policies. This will be accomplished through the recent establishment of the National Council of Public Trust. The council is meant to help the government “quickly and efficiently respond to all constructive requests of citizens,” Tokayev said.

“It is necessary to support civil society, to involve it in the discussion of the most urgent national tasks,” he said.

The future elections to the Mazhilis (lower house of Parliament) and maslikhats (regional or city assemblies) will also help broaden the country’s multiparty system, he said.

“If peaceful rallies do not seek to violate the law or the safety of citizens, they need to be embraced and to be given permissions required by law and offered special locations, not in the outskirts of cities, by the way,” Tokayev said. The Presidential Administration has also created a department to ensure public appeals to local government bodies are heard and considered.

Such a department is necessary as “often people are forced to turn to the president because of the deafness and closed officials in the centre and in the localities,” he said.

The President also said Kazakhstan needs to increase the penalties for sexual violence. The country had softened the penalties in May 2000 to encourage more victims to report these crimes.  That effort, however, did not have the intended effect and the government has determined tougher penalties are needed.

“We have gotten carried away with the humanisation of legislation, having lost sight of the fundamental rights of citizens. We urgently need to tighten the punishment for sexual violence, paedophilia, drug trafficking, human trafficking and other grave crimes, especially against children,” the President said.

The President also instructed national officials to increase the pay of civil protection officers and reform the Ministry of Internal Affairs. He instructed the allocation of 173 billion tenge (US$445,587.5) toward these tasks.

“One of most pressing tasks is full-fledged reform of the law enforcement system. The image of police as an instrument of power of the state will gradually recede into the past. It will become a body to provide services to the citizens to ensure their security. At the first stage, we need to reform, before end of 2020, the work of the Committee of Administrative Police. We need to do it in a quality way and without gung-ho approaches,” he said.

The government will gradually cut a quarter of civil servants from 2020 to 2024. This is intended to leave workers that are more productive and provide them with material incentives, Tokayev said.

The President also called for the exemption of micro and small businesses from taxes on core activities for three years starting from 2020 and tasked the government to reduce the numbers of state-owned companies.

The reduction of the companies operating in strategic sectors, however, should be carefully approached, Tokayev said, to prevent a substitution of state-owned monopolies by private monopolies.

He also said the government will seize unused agricultural land.

“Many of those who received land leases for free from the state keep the land for future use without working on it. A whole layer of the so-called latifundists has developed in the country,” explained the President.

The President emphasised the use of land should be entirely the responsibility of the Kazakh people. He also stressed that foreigners will not be able to buy lands in the country.

“The situation is aggravated by the low level of direct taxes on land,” he said.

The President also tasked the government to postpone the introduction of 5 percent additional pension contributions until 2023.

The June explosion at a weapons depot near the city of Arys also exposed numerous issues needing addressing within the Armed Forces, Tokayev said. He stressed the “need to streamline all military expenditures and strengthen financial and general discipline in the army.”

The President also reaffirmed the need to strengthen the role of the Kazakh language as a state language.

“Role of the Kazakh language as the state language will be strengthened and the time will come when it will turn into a language of interethnic communication. For that, however, we all need to work together,” said the head of state.

The President also addressed the need for quality education and instructed teacher pay raises over the next four years, including a 25 percent salary increase in 2020.

Tokayev also announced an increase in funding for the With a Degree to the Village programme up to 20 billion tenge (US$51.5 million.)

“The gap in the quality of secondary education in urban and rural schools is growing every year. The main problem is the lack of qualified personnel in rural areas,” said Tokayev.

Tokayev also instructed the government to examine allowing working citizens to use part of their pension savings to buy a house or get an education.

Tokayev spoke on the need to efficiently use the National Fund and said targeted transfers from 2022 will be reduced to 2 trillion tenge (US$5.15 billion).

“Citizens who do not have income to purchase a property should be given an opportunity to live on a social lease,” Tokayev said.

The number of targeted social assistance recipients has grown from approximately 77,000 to more than 1.4 million in five years. Budget spending on social support has increased 17 times since 2017.

“In other words, more and more people choose not to work or conceal their income,” said the President.

In 2018, government procurement totalled 4.4 trillion tenge (US$62.85 billion), 75 percent of which were carried out in a non-competitive way through purchases from one source. Tokayev urged a stop to the ‘feeding trough.’

He also suggested introducing an assessment system where the people will be able to evaluate the effectiveness of local governance.

“For example, if as a result of the poll, more than 30 percent of the locals believe that the akim (mayor) of a city or a village is ineffective, this is a reason for a special commission to be set up,” Tokayev said.

He was elected President June 9 with 70.96 percent of the vote.