By Elya Altynsarina in International on 11 September 2019 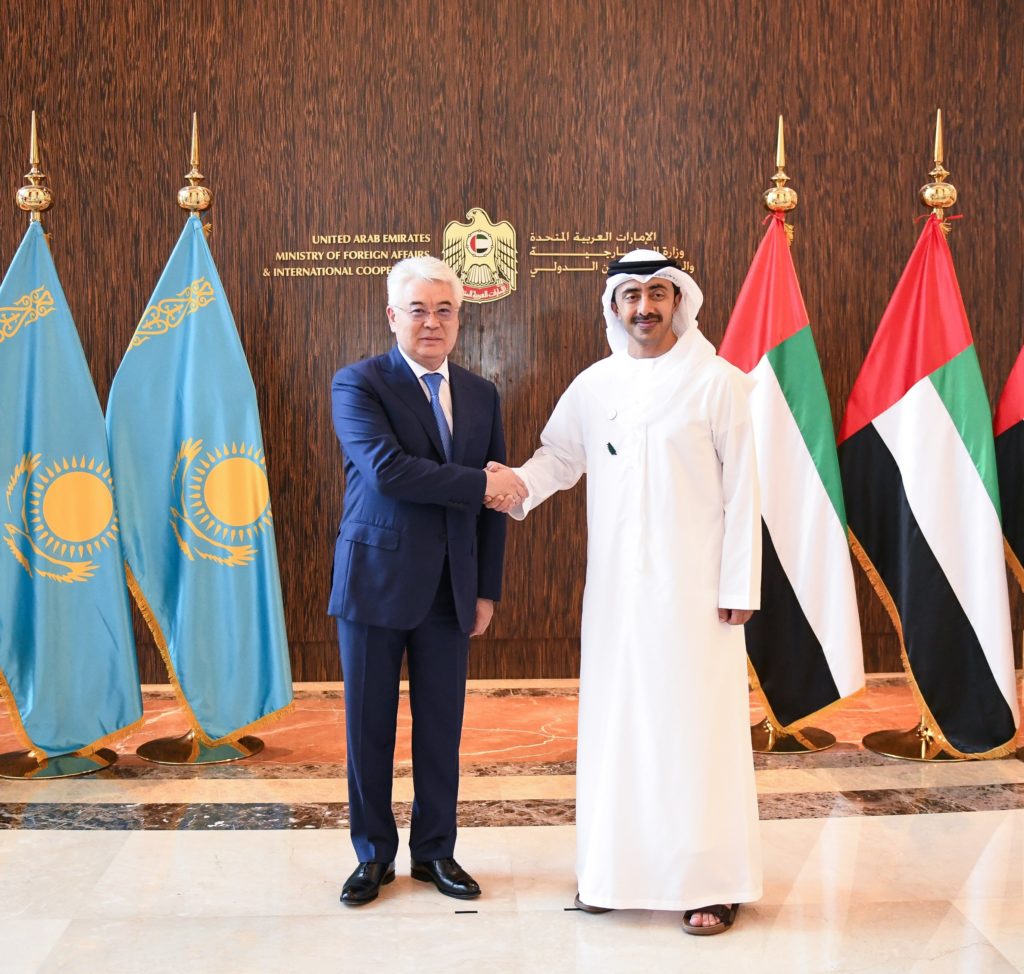 “The UAE is our key strategic partner in the Middle East,” said Atamkulov at the meeting.

Sheikh Mansour said the two countries should expand their ties, noting the UAE is primarily interested in investment in infrastructure construction and tourism in Kazakhstan.

The two countries are currently cooperating on projects in air travel, logistics, the agro-industrial sector and new technologies. The Emirates is participating in investment projects in Kazakhstan, such as the construction of Abu Dhabi Plaza multifunctional complex in Nur-Sultan and the polypropylene production site in the Atyrau region. 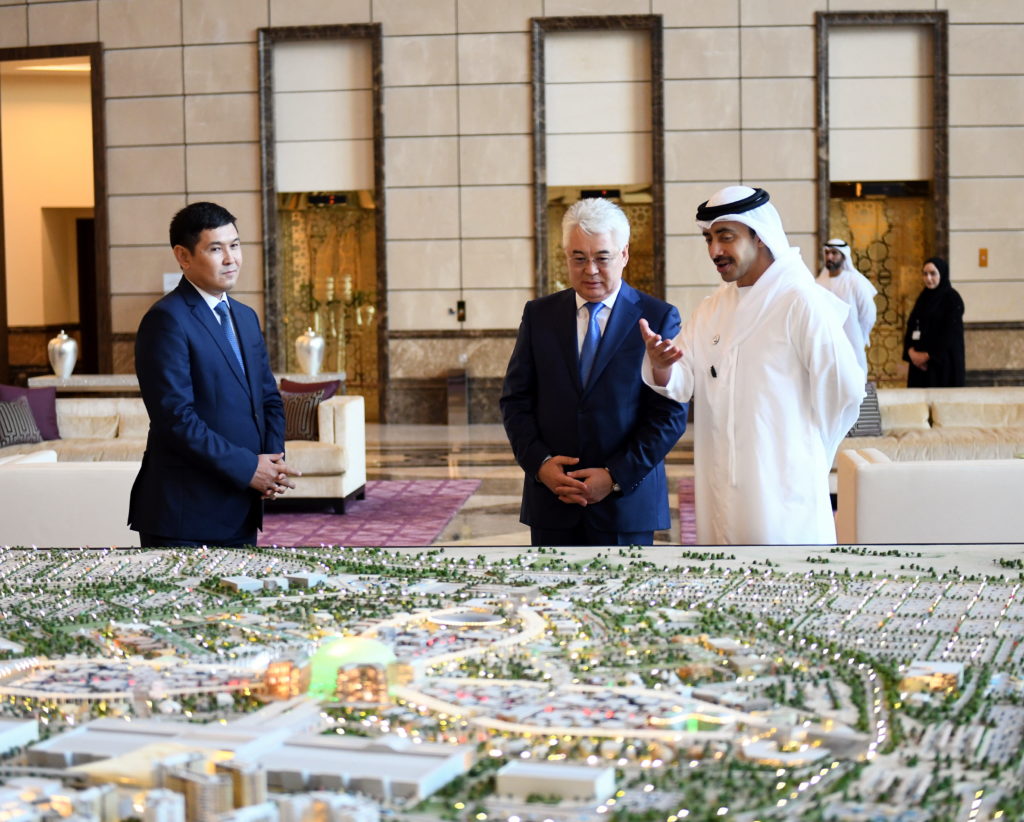 Joint investment on these two and other projects has reached $10 billion. The Abu Dhabi Plaza, when completed, would become a hallmark tower of the Kazakh capital and one of the tallest buildings in Central Asia.

Kazakhstan is also in the early stages of designing and building its pavilion in Dubai, which will host EXPO 2020.

Atamkulov also met during his trip with UAE Minister of Foreign Affairs and International Cooperation Sheikh Abdullah bin Zayed Al Nahyan, who, along with his Kazakh counterpart, co-chairs the IGC.

Sheikh Abdulla thanked Kazakhstan for supporting and cooperating on the UAE’s development of its space industry. One of the first two astronauts from the United Arab Emirates, Hazza Al Mansouri, is expected to fly into space on Sept. 25 from the Baikonur Cosmodrome of Kazakhstan to the International Space Station. A delegation led by Chairman of the UAE Space Agency Dr. Ahmad bin Abdulla Humaid Belhoul Al Falasi and a representative of the country’s Ministry of Education will also attend the event. The launch is considered an historic moment for the Emirates’ space development. 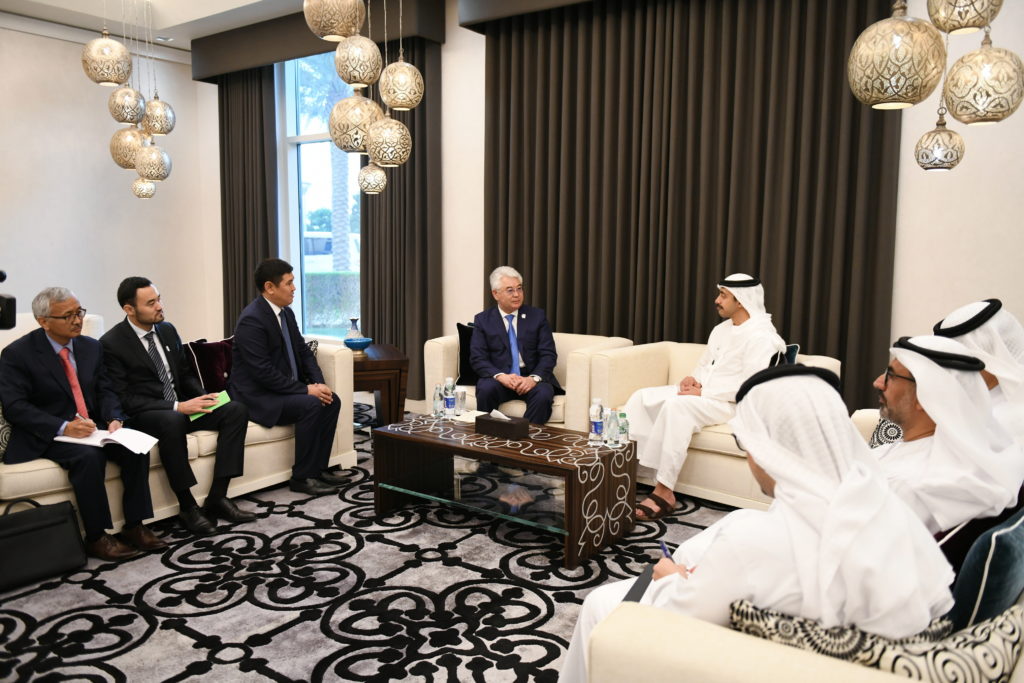 Atamkulov also noted the Emirates’ education project in Nur-Sultan funded by The Khalifa Bin Zayed Al Nahyan Foundation. The foundation provides funds for school-lyceum No. 84 and the UAE partners on scholarships for the school’s best students to go to Emirati universities.

The commission also oversees food safety, technical regulation, standardisation and metrology. The delegations reached an understanding on the facilitation of trade operations, the elimination of technical barriers, the mutual recognition of procedures and national marks, as well as cooperation in food certification.

Between 2005 and 2019, direct investment from the UAE to Kazakhstan reached $2.1 billion, but both sides say this number is far below the potential of Kazakh-Emirati cooperation.

While Emirati business is active in Kazakhstan with 325 companies registered, Kazakh entrepreneurs as well have been gaining solid experience in the UAE – the second largest market in the Middle East. For the same period of 2005-2019, investments from Kazakhstan reached $932.4 million, mainly in the supply of meat products, vegetables, fruit, dried fruits, nuts and honey through large retail chains and more than 40 hotels of the UAE.