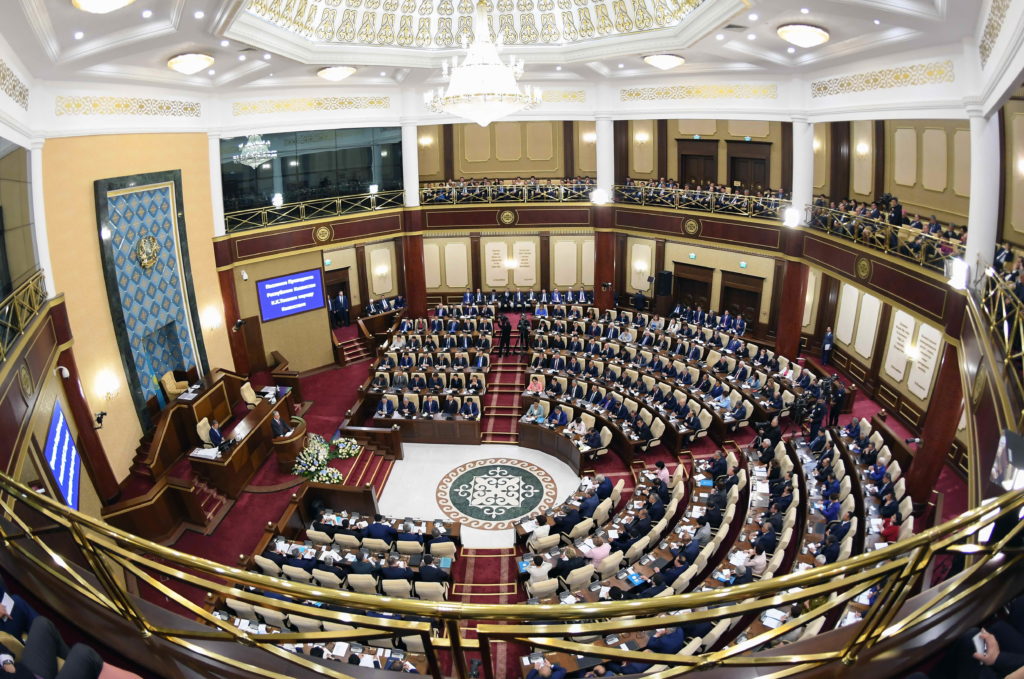 “Our work should proceed from the need for the full implementation of the Five Institutional Reforms and the Plan of the Nation developed by Elbasy (Leader of the Nation, the constitutional title accorded to Nazarbayev). The work of the National Modernisation Commission that he created should be resumed,” Tokayev said.

Kazakhstan must create a multiparty system to build a modern, effective state, he said, noting the ruling Nur Otan party should collaborate more with other parties.

“This is important for the stability of the political system in the long run,” he added.

The President also urged more public involvement in the formation of policy and the allowance of more peaceful protests.

To keep the nation united, Tokayev directed the government to continue creating conditions for all ethnic groups to develop their languages ​​and cultures.

“Our position: ‘The unity of the nation is in its diversity!’” he said.

“I am convinced that such significant events will contribute to the education of the younger generation in the spirit of genuine patriotism,” he added.

He stressed the need for analysis of court decisions to improve their quality.

Citizens are often left in unequal conditions in public law disputes against decisions and actions of authorities. To level the difference, the President said, “It is necessary to introduce administrative justice as a special dispute resolution mechanism.”

“Henceforth, when resolving disputes, the court will have the right to initiate additional evidence collection, the responsibility for the collection of which lies with a state body and not with a citizen or a business,” he added.

Along with toughening penalties for sexual and domestic violence, Tokayev instructed the government to take measures within two months to better protect wildlife from poachers.

“Recent tragic events have revealed the problem of poaching, as a most dangerous form of organised crime,” he said. “Poachers are equipped, armed, feel their impunity. This year alone, two wildlife inspectors died at their hands.”

“If we carry out the necessary structural changes, then by 2025 we will be able to ensure annual sustainable growth of gross domestic product of 5 percent and higher,” he said.

Tokayev also would like to diversify the economy and see labour productivity increase at least 1.7 times, he said.

He will also introduce a moratorium on the creation of quasi-state-owned companies “to reduce the unjustified presence of the state in the economy.”

The Kazakh Government and the Accounts Committee have also been instructed to conduct an analysis of the effectiveness of state holdings and national companies within three months.

Another factor in developing the economy is to support small- and medium- sized businesses (SMEs).

“The system of state financial support for SMEs needs to be ‘rebooted,’ giving priority to new projects,” said Tokayev.

He instructed the government to allocate an additional 250 billion tenge (US$645.34 million) over the next three years as a part of a new Business Roadmap programme.

“It is necessary to actively introduce new forms of business support with an emphasis on social aspects – the creation of family businesses, primarily for large and low-income families,” he said. “Particular attention should be paid to tourism development, especially eco- and ethno-tourism, as an important area of ​​the economy.”

The government should also support national business in international markets.

In addition to this, national legislation should be adapted to the latest technology, such as 5G, Smart Cities, Big Data, blockchain, digital assets and new digital financial instruments.

“Kazakhstan should become a brand as an open jurisdiction for technological partnership, data centres’ construction and placement, data transit development, participation in the global digital services market,” he said.

Another factor in economic development is developing the agro-industrial complex. More than 3,000 rural settlements have to be maintained.

He instructed the government to allocate 90 billion tenge (US$232.32 million) in the next three years to develop Auyl – El Besіgі state programme.

“Non-cash payments should be introduced everywhere, eliminating the constraining factor – a high commission of banks,” he said.

The Kazakh National Bank will assess second-tier banks’ assets quality by the end of 2019.

To continue Kazakhstan’s social modernisation, he also focused on improving the quality of the country’s education system. The President said the country “must move on to a career guidance policy based on identifying student abilities,” fight the growing “gap in the quality of secondary education between urban and rural schools” and improve the quality of textbooks.

He also said it is important to support family institutes and create an inclusive society. He said priorities in this regard should include protecting children rights, combating domestic violence, reducing suicide rates among adolescents and encouraging participation in sports among all age groups.

He also instructed authorities to allocate at least 58 billion tenge (US$149.25 million) over three years to create equal opportunities for people with disabilities.

The President also noted the importance of access to medical care and the continued development of social supports and pension systems.

Tokayev also stressed the need to revise the budget process at all levels and said the public should play a major role in drafting local budgets.

“District, city and rural levels of government should become economically more independent in solving problems of local importance. Their rights, duties and responsibilities should be clearly regulated in legislative acts,” he said.

The President also called on the government to improve the management of urbanisation, pursue a unified housing policy and infrastructure development.

“In general, the government in the coming period should increase the efficiency of its activities. The people of Kazakhstan are waiting for concrete results,” he said.